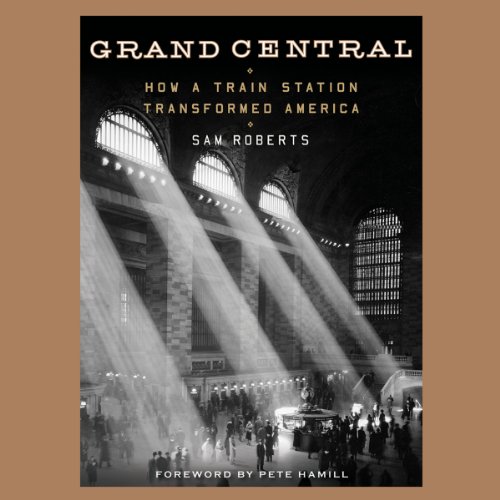 A rich, illustrated - and entertaining - history of the iconic Grand Central Terminal, from one of New York City's favorite writers, just in time to celebrate the train station's 100th fabulous anniversary.

In the winter of 1913, Grand Central Station was officially opened and immediately became one of the most beautiful and recognizable Manhattan landmarks. In this celebration of the 100-year-old terminal, Sam Roberts of The New York Times looks back at Grand Central's conception, amazing history, and the far-reaching cultural effects of the station that continues to amaze tourists and shuttle busy commuters.

Along the way, Roberts will explore how the Manhattan transit hub truly foreshadowed the evolution of suburban expansion in the country, and fostered the nation's westward expansion and growth via the railroad.

Featuring quirky anecdotes and behind-the-scenes information, this book will allow listeners to peek into the secret and unseen areas of Grand Central - from the tunnels, to the command center, to the hidden passageways.

With stories about everything from the famous movies that have used Grand Central as a location to the celestial ceiling in the main lobby (including its stunning mistake) to the homeless denizens who reside in the building's catacombs, this is a fascinating and, exciting look at a true American institution.

What listeners say about Grand Central

Nice Trivia but not much insight into history

As a huge Grand Central fan I found too many research mistakes and too little coherence to call this a worthwhile book. Adding in poor editing - is it 1962 or 1862? - and you have a fourth rate history. if interested in this subject, look elsewhere.

Grand Central Terminal; Then and now;

I found this book to be both accurate and informative as it presents facts that other books on GCT haven't published which tells me the author did their homework. Presents the original intent of GCT as well as the roller coaster this piece of real estate has been through in the NYC market. Well done. Add a star of you like NY landmarks, add another if you are a railroad enthusiast, add another if you are a mechanical engineer.

The coverage of past to now

Flow of the reading

Go see it in person

The content of this book is interesting but the lackluster performance makes it very boring. This is probably the most monotone performer that I've ever listened to. I cannot recommend this book.