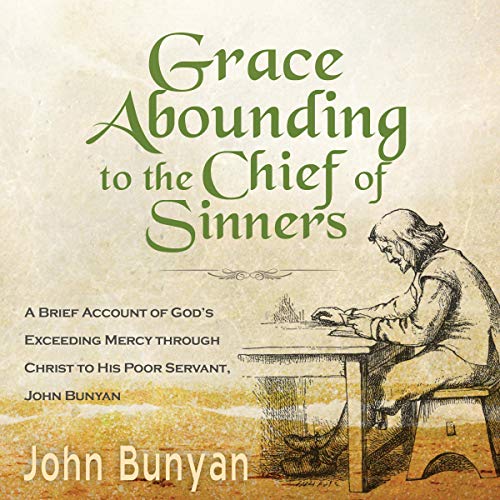 Grace Abounding to the Chief of Sinners (Updated, Modern English)

This is a short and honest account of how God demonstrated his exceeding great mercy to his unworthy servant John Bunyan. This story specifically tells how Bunyan was converted.

John Bunyan was a companion of sin and was troubled by sin. He fought temptation and sin in his own strength and lost, and in despair, he gave up hope of ever finding God’s mercy; but the Lord Jesus Christ at last delivered him from the guilt and terror that so often and so viciously troubled him.

In addition to this, a short account of Bunyan’s call to the work of the ministry is told, along with the trials and trouble he encountered - including some of the difficulties he faced while in prison.

This is all taken from his writings, and is now published for the encouragement and support of others who are weak and tempted and need strength and hope and victory in Jesus.

John Bunyan was born in November 1628, in Elstow, England. A celebrated English minister and preacher, he wrote The Pilgrim’s Progress (1678), the book that was the most characteristic expression of the Puritan religious outlook. His other works include doctrinal and controversial writings; a spiritual autobiography, Grace Abounding (1666); and the allegory, The Holy War (1682).

What listeners say about Grace Abounding to the Chief of Sinners (Updated, Modern English)

Like Bunyan reading and relating to Luther, I can’t stop reading Bunyan and how much I’ve related to his struggles. To God be the glory, this is an amazing book! Highly recommend reading the book while listening to this audio.

What an amazing, heartbreaking, glorious testimony by John Bunyan himself. If you have ever doubted your salvation, struggled with assurance or wondered how to resist the devilish temptations of Satan to bring you down... then please listen to this book. You will be anguished, thrilled, and determined to settle you accounts with God now, before it's too late!
There is a short biography at the beginning of the oil to place this work firmly in Bunyan's life. At the end is several pages of wonderful quotes by him as well, some comforting and some admonishing.
The narrator's voice is perfect for this reading. I know you will profit from reading it.

I’ve never been much of a reader so being able
To listen to these books means the world to me, Pilgrims Progress was thought provoking and lead me to seek more of his writings, this book, biography/autobiography appropriately titled in the context of Paul’s words resonated with me as they should all Christians. Hopefully, you can relate. Seeing our lives right with God. Thank you for reading and thanks to the people who worked on this audio book.