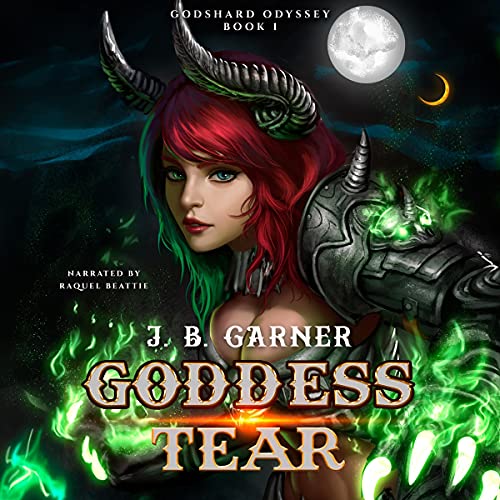 The Amiran Steppes. An untamed land of vicious beasts and mythical dangers.

Few know this better than Shandra the Wild Wolf. Born frail and cursed, the young woman proved herself time and again, against all odds, through many battles and trials. Yet, even the wandering warrior could not anticipate the bloody homecoming that awaited her.

A powerful outland force, led by the fearsome and pious General Arabella, has devastated Shandra's tribe and stolen a most sacred relic: a godshard. Now, together with her beautiful childhood friend and an eccentric gnome with a questionable past, Shandra must journey forth to recover the godshard and avenge her people.

Dangerous wilds, ancient monster-infested ruins, and a tangled web of love, loss, and secrets stand between Shandra's party and their goal. Even if they survive long enough to catch Arabella, can these three stand against the might of the Sal'Vari Empire, the most powerful army on Alban?

What listeners say about Goddess Tear

I just want to say first and foremost that this book was amazing and very enjoyable. I just had two issues with it, one of which I am just being nit picky since there wasn't much to not like about it.

1. That if you don't pay close attention you may not know who's point of view it's in. The book jumps to different points of view which is completely fine and nice to see things from different views but some of the character voices were very similar so it made it a little hard to keep up.

2. I wish it were longer and am eagerly awaiting the next book in the Godshard Odyssey series!

Side note - if you are looking for vivid detail in naughty scenes you will be disappointed but this does not detract from the story at all. The relationship dynamics between all the characters made it, in my opinion, better than any naughty bits could have.

Overall this was a great book! Good job to both the author and narrator!

loved the pacing of the story overall. Shandra was an amazing character and i loved watching her and her companions all grow. if you like some action but mostly character focus then i definitely recommend this story. i cant wait for the next book to come out