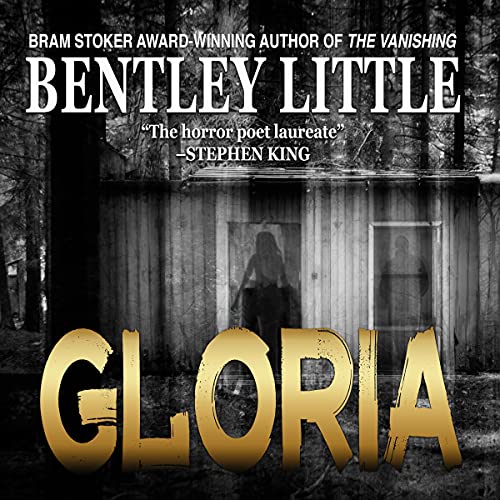 By: Bentley Little
Narrated by: John Pirhalla
Try for £0.00

Considering she had just attended her mother's funeral, Gloria Jaymes never expected to see the woman again, but then her dead mom shows up at her house.

Gloria's mom is...different. She's younger than when she died, dressed in clothes from the 1980s. And nobody else in Gloria's family seems to recognize her. As Gloria tries to figure out the reason for her mother's reappearance and the odd behaviors the woman begins to exhibit, other bizarre events occur. The changes to Gloria's world are small and subtle, at first...then they become much more startling.

The freaky situation might just be connected to a mysterious shed in a small California town. The strangers who gather around the shed seem to know Gloria's name...and maybe they aren't strangers after all. With Gloria, Bentley Little presents one of his most complex and compelling novels - one that is certain to surprise listeners with every twist and turn.

What listeners say about Gloria

Could Have Been Better

So, I've been listening to quite a lot of Bentley Little's books and for the most part, I love them. He's got the ability to reel you in and get you hooked. And initially I liked this book, but I felt the repetition of things that were happening (I don't want to spoil it for anyone) was a bit too much and it became harder and harder for me to go along with. It could have been so much better. I just felt let down about midway through. I've really loved some of his other offerings, so maybe this one just wasn't for me.

From the first sentence, Bentley Little’s perplexing new novel, Gloria, is instantly captivating, and lays out out a creepy, affecting tale of love, loss and grief from a perspective that only Little could muster. This is probably his most emotional, approachable, and fantastical novel to date – a true feat – and quite different in tone from his other work.

In his latest book, Gloria is hosting a reception after her mother’s funeral, when a much younger version of her mother shows up at the door. Gloria is relieved to see her but confused and then alarmed. Who is this person pretending to be her mother? The question becomes not who she is but rather what is she, and should she be trusted? No one else seems to recognize this woman, even her own sister, making Gloria consider that she’s lost her mind. It’s so unnerving, sad, and chilling to think of your loved ones, once cherished, as dangerous and part of a larger nefarious scheme. It’s downright diabolical.

The complex structure of the narrative will test many readers with a repetitive nature that presents one puzzling scenario after another. Then haphazardly jumps in space (and time?). Separated into six books, each new section deepens the mystery, tempting the reader to be extremely detail-oriented, but it’s best to just accept the proceedings at face value. What’s unmistakable is the indistinct dread mounting steadily in the background. What is going on? Is Gloria insane? Her journey of self-discovery leads to some bizarre and otherworldly places.

Gloria may not please long-time fans of Little’s hard, psychosexual, grotesque horror but I welcomed this softer direction. His books are usually plot heavy but he spent more time here developing Gloria’s inner thoughts, feelings and desires. He wrote a very compelling and likable heroine, and keeps us rooting for her, and I often even identified with her. I’m not sure that I can recall another book of his with such a strong female protagonist.

Ultimately, Little maintains his brand of strange, outlandish fiction, building nightmarish worlds and making them seem utterly plausible. It’s terrifying how he gets under my skin. Each book I read of his makes me momentarily question reality and the cosmos themselves. And then as usual, his abrupt and abstract ending delivers a satisfying finish, and I am glad to be done with this world. It such an unsettling, dark experience every time, and exactly what you want from a horror novel.

What in the cornbread h3ll was this?

I can't rate it one star "overall" because I listened to the end of it, so I gave it two stars. The performance was great. John Pirhalla did an excellent job. Reading to you like your favorite teacher after lunch. Staying underneath the story, just reading and not trying to act it out, which I hate. So thanks, John!

Bentley Little has always held my attention and I stuck with him until the end on this mess. That was after I skipped a couple of the parallel lives because there seemed to be no real reason to wander through another one. I decided if a super ending came forth I could go back and pick up the places where I decided to skip. No such super ending came. This may have been my most disliked book that I actually finished.

Well, Mr. Little, you've served up good stuff long enough so that a bunch of us will hang through 11 hours of your meanderings through the lives and times of a woman named Gloria. She lived her many parallel lives in one setting after another, one age after another, different families, different careers...all that lead to nothing except the beginning of another serving of the same. Yep. that was the ending. Nothing more.

It was a different kind of horror...horrified that I spent 11 hours listening to it. LOL In other words, a real stinker.

If you lose focus for five minutes you can get totally lost. It's not a bad storyline, but following it is not easy!

This was good, weird ,insane, and at times terrifying. Gloria has a husband named Benjamin.He dies. She wakes and he is back,they are now parents,but they always were.That is not true. I enjoyed it! John Pirhalla was a fine narrator.

This was my 3rd book of his and it was a good one. The handyman was my 1st and I was hooked after that!!!
I really enjoy his style and would definitely recommend him to everyone!

Little tries something new and it doesn't work

Bentley Little usually takes something normal and turns it into horror. This book doesn't do that. He starts with the weirdness from page one. It just doesn't work out. It was boring and you don't find out what the point of the book is for about 6 hours. By that point I didn't care anymore

I love Bentley Little and have listened to many books but this was not one I enjoyed. I had to return it. It jumped around and made it hard to understand where it was going. I think I’ll try a different story.

The narration was great. It helped carry this dark but good horror tale. Little keeps churning the stories out.

it's a love story,. I loved it,hope ya enjoy it too,another great book from Bentley Little

great story, and I just love this narrator!! wish the author would use him more often .