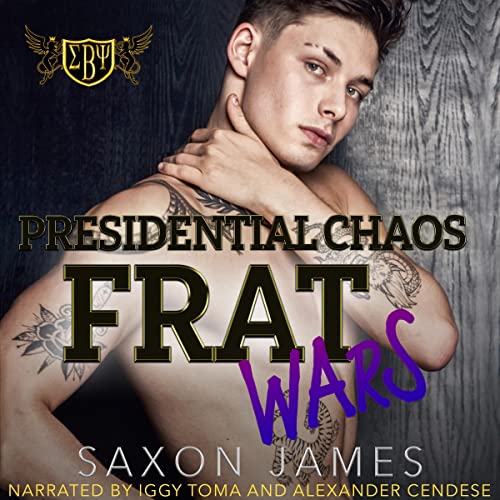 By: Saxon James
Narrated by: Iggy Toma,Alexander Cendese
Try for £0.00

Two houses. Two Presidents. One hell of a happy ending.

Being president of a frat house means everything is on my shoulders.

None of it fazes me.

But senior year is almost over, and I’m ready to take a step back.

Until the hazing rumors start.

I might not know where they’re coming from, but I know they’re total BS.

Now, instead of dialing back the stress, we’ve broken the number one rule on the row: Don’t get the dean’s attention.

I need to find out who’s driving the lies.

And all evidence points to one person.

The appointment was made easier, though, when none other than Zeke Ariston took over Sigma house. I’ve always been…drawn to him. Fascinated.

And maybe a little attracted too.

Pity I’ve never been more than an afterthought to him.

But when rumors start to circulate about hazing and the sources lead back to my house, it puts me square on Zeke’s radar.

I want to help him get to the bottom of it all.

And with his attention finally on me, I want to tell him how I feel.

The guys on Greek Row meet their chaotic conclusion with this rivals-to-lovers romance full of pranks, shared hoodies, and secret meetings made in the dark.

This whole series is so wholesome nd hot. But this is the one with all the feels

That was a great finale!

And a fun mystery even if I think the "unmasking of the monster" was a bit anticlimactic, I was lowkey wanting the Dean himself to be the culprit.

I don't think I've ever enjoyed a series more. loved every couple and their books. I'm not new to the genre or college frat themes, but there's something magical about all three of these novels that has me replaying them over and over again. great job saxon james and ofcourse Alexander Cendese and Iggy Toma are always a win. you guys never cease to be anything more than incredible.

This is a great story. Saxon James never fails to write an outstanding MM romance. this series has all the feels and a great group of guys. I love series that have a group that is in each and every book. the couples are all so different and end up with the sweetest love and HEA. Alexander Cendese and Iggy Toma are a great MM narrating duo. they work well together and bring all the characters to life with feeling and laughter.

Ever since I read this a few months ago I have been eagerly awaiting Charles and Zeke' audio! It did not disappoint. Once again the narrating team of Alexander and Iggy were just fabulous!

Iam so incredibly sad this wonderful series is over, but what a way to go out with a bang! I absolutely loved EVERYTHING about this book! I was pulled into Charles and Zeke's story from word one and excitedly flipped pages until the end, just engrossed in their story. This book just hit all the right notes for me. It was sweet, it had fabulous heat, it was flirty, it was so swoony, it was just fantastic! Zeke and Charlie's relationship builds slowly during a few months as school is coming to an end, they are trying to figure out their future, and a scandal has hit frat row. They've got each other's backs and every connection they had just affected me so much. I was either smiling, sighing, trying to tamper down the butterflies in my stomach, or messaging my friends telling them how good this book is! I love everything this author writes, but Zeke and Charlie have made it to the top of my list. Just so great!