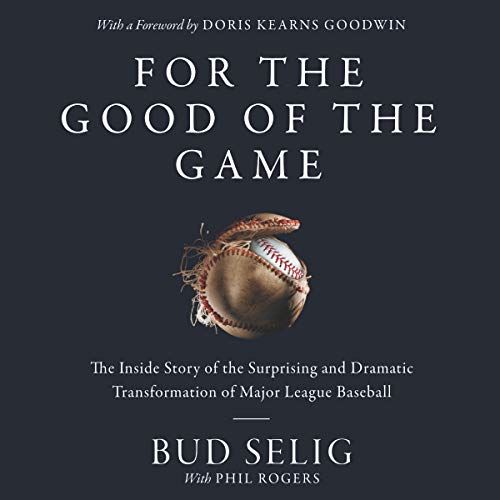 For the Good of the Game

The longtime Commissioner of Major League Baseball provides an unprecedented look inside professional baseball today, focusing on how he helped bring the game into the modern age and revealing his interactions with players, managers, fellow owners, and fans nationwide.

More than a century old, the game of baseball is resistant to change - owners, managers, players, and fans all hate it. Yet, now more than ever, baseball needs to evolve - to compete with other professional sports, stay relevant, and remain America’s pastime, it must adapt. Perhaps no one knows this better than Bud Selig, who, as the head of MLB for more than 20 years, ushered in some of the most important, and controversial, changes in the game’s history - modernizing a sport that had remained unchanged since the 1960s.

In this enlightening and surprising audiobook, Selig goes inside the most difficult decisions and moments of his career, looking at how he worked to balance baseball’s storied history with the pressures of the 21st century to ensure its future. Part baseball story, part business saga, and part memoir, For the Good of the Game chronicles Selig’s career, takes fans inside locker rooms and board rooms, and offers an intimate, fascinating account of the frequently messy process involved in transforming an American institution.

Featuring an all-star lineup of the biggest names from the last 40 years of baseball, Selig recalls the vital games, private moments, and tense conversations he’s shared with Hall of Fame players and managers and the contentious calls he’s made. He also speaks candidly about hot-button issues like the steroid scandal that threatened to destroy the game, telling his side of the story in full and for the first time.

As he looks back and forward, Selig outlines the stakes for baseball’s continued transformation - and why the changes he helped usher in must only be the beginning.

What listeners say about For the Good of the Game

This should have been a book that delivered on its sub-heading but sadly the opportunity was missed. Short on insights and anecdotes, the book drones on buoyed only by the author's self congratulatory style.

Bud seems a likeable fellow and I don't wish to take anything away from his achievements in baseball, but as an author he bunted with the bases loaded and was out before the winning run could be scored.

Bud's heartfelt tribute to himself

Things you'll learn:
1) Bud really, really wants you to like and respect him.
2) Anything good that's happened in the last half century in baseball is because of him.
3) If there's something you don't like about baseball... it's never Bud's fault. Players, owners, unions, yes. But never Bud. Even with the infamous 2002 ASG debacle, while claiming to take the hit, he finds a way to explain how he really wasn't to blame..

I didn't honestly think I'd sit down and listen to this audiobook in one go. But the sheer audacity of Bud Selig's humble-bragging is infectious. He's quite clear about who he likes (Henry Aaron, George Steinbrenner), who he dislikes (Barry Bonds, Donald Fehr), who he begrudgingly respects (Marvin Miller), who he didn't respect (Fay Vincent). The problem is that, with a maddening false humility, he manages to relate how he, himself, is always the smartest guy in the room. Not only the smartest, but the most ethical, and socially aware. (His old white guy recollections of growing up without a racist bone in his body gets predictably cringeworthy.) I have no doubt he is a decent man, but he comes off a person who is very defensive about the fact that nobody else is willing to step up to say what a great guy he is.

A couple of glaring problems need to be mentioned. The first part of the book is virtually a love letter to Henry Aaron. There's nothing wrong with that, but the deliberate juxtaposition of Aaron with Barry Bonds, good guy vs bad guy, comes off churlish and petty. It only gets worse when Selig addresses the steroids era, which obviously fingers Bonds. Tellingly, there are very few mentions of any controlled substances other than steroids, noting cocaine a few times, and amphetamines only once. And then, never referred to as "greenies". And certainly never in the same sentence with Henry Aaron. Yet he claims to have read Jim Bouton's "Ball Four". Hmm.

This is more problematic with Selig's righteous indignation about the handling of drug testing. He, quite contradictorily, first claims that he didn't know what was happening in the steroid era. Yet virtually in the same breath, blames the union for restricting the owners' noble effort to eliminate steroids from the game. There is certainly some truth in both of those positions, but he can't have it both ways. At least not the extent of credit he wants. And if Bud wants anything, it's credit.

A must listen for real baseball fans

Bud does an excellent job of walking listeners through the real problems baseball has faced over the last 40+ years. Great insights from the man at the middle of most everything!

Offered insights I didn’t know previously. Quite interesting and engaging. Recommend very much to anyone interested in the business and evolution of baseball.

Very insightful - a must-read for any baseball fan

Very insightful and enjoyable journey through the past few decades of Major league baseball. Made me realize how misinformed the public was on the commissioner's handling of steroids and other issues.

Loved to hear from Bud about baseball

I loved to hear all the stories about Bud’s life, baseball throughout the years, and his perspective on many things like steroids, expansion, Pete rose, and much more.

My only complaint was the narrator sometimes over pronounced certain words and mispronounced some baseball people’s names.

Bud Selig writes a great memoir. Only problem with the book is that Selig tries to pain himself as a poor victim in most of the situations. Only one I believed he would have been worth feeling sorry for was with the situation with Bill Clinton. Overall, a great book on the history of baseball and CBA’s

Great insight to an era of baseball history

I really enjoyed this inside look into Bud Selig’s baseball life, from car salesman to commissioner. The book delves into parts of the game I watched as a young fan, but knew nothing about. The author outlines Bud’s victories and shortcomings beautifully. An excellent read for anyone who loves the game.

Thus book by Bud Selig gives all of us baseball lovers a glimpse into being part of America’s favorite pastime!

Great story of Bud and Baseball

This book is great for those who both love history and biographies. Bud does a great job of bringing you into his world as he tries to preserve baseball in Milwaukee and how he grows baseball, through good times and bad.