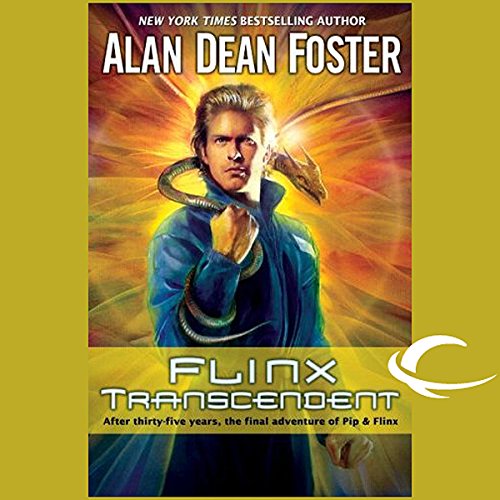 From one of the most brilliant imaginations in science fiction comes Flinx Transcendent, Alan Dean Foster's thrilling conclusion to the series that began over 35 years ago - the epic adventures of Flinx and his flying minidrag companion, Pip.

Flinx is the only one with even the tiniest chance of stopping the evil colossus barreling in to destroy the Humanx Commonwealth (and everything else in the Milky Way). With time running out, Flinx is a man in search of a solution and in search of himself. His efforts take him to the land of his mortal enemies, the bloodthirsty AAnn, where chances are excellent that Flinx's discovery - and summary execution - will eliminate all his demons and doubts in one masterstroke.

The way Flinx is feeling, that might not be the worst imaginable end. After years of searching for his father, he finally has - and must bear - the truth. And now he must also seek out an ancient sentient weapons platform wandering around somewhere in the galaxy and then communicate with it, a powwow that could very well fry his already frazzled brain. Then there are the oblivion-craving assassins determined to stop Flinx before he can prevent total annihilation.

With a future that rosy, it's no surprise he's flirting with disaster. Still, Flinx is no quitter, and he's got something else going for him - an uncanny ability to improvise and triumph (or at least survive) in impossible situations. He's certainly been through enough of them, and now he's going to need every ounce of that know-how, because he's venturing to places where the laws of physics fear to tread, where no one's ever been, to do what no one's ever done, and where his deadliest enemy is so close it's invisible.

What listeners say about Flinx Transcendent

A series that I've followed for 26 years

I started reading about Flinx in 6th grade, 1983 I just happened to pick it up the first day it came in at the library at Humboldt Jr High and from there, I became a fast fan of Science Fiction. The last few books of the series seemed to be fillers then this. It brings the entire universe back together, loose ends are tied off and the great mysteries of the Commonwealth that are mentioned in other books are put to rest. This book is no lightweight. Good job Alan, I've been around for the long haul and I'm happy to have such a great ending to this road. Now it's time to get my son hooked on the series, thanks!

This was the first book that I read in the series and I was surprised to find out that it was the last of the series. I've enjoyed it so much that I'm going back to the beginning to hear about all of Pip and Flinx's adventures that lead up to the final book.

After almost 30 years the story comes to an end.
Wow what a trip Thranx, Aann, Tar-Aiym, Bio Keys, Smart Bears, Love, Hate, disfunctional family problems, and More.... Flinx is finally presented with a way to close the book on all this.
Great Job Alan! you kept my intrest for 3 decades!
Some say this is a "Young Read" well I say it was a FUN READ...
Thanks Audible for producing this series for our enjoyment.
Well worth the credits and the listen!

Foster just gets better and better. Pip and Flinx are a worth while read for any age.

Why do I keep reading these?

So I have now read all of the Pip and Flinx books. But I don't know why.

They're reasonably well written. Actually, that's not fair, they are very well written, but Flinx (the main character) is a jerk. He starts off as a reasonably nice kid who has to overcome the handicap of having been reared on the streets. But as he grows up he becomes more and more arrogant and thinks he has the right to judge whether or not civilization is worthy of his saving it.

In the meantime while in search of his heritage, he ruins a woman's career by bewitching her into helping him break into a secure complex that she is responsible for keeping secure. He kidnaps another female and forces her to help him go to an edicted planet (which ought to ruin her career, but we find out later that it didn't). He falls in love with a woman but feels no urgency to be with her or help her, and at one point she's tied up with bombs attached to her body and he's busy having old home week with the character who rescued them. He clearly has no care or respect for anyone but himself.

And yet I bought and read all of the books. But I don't know why.

So after 20 years of reading this series I was somewhat disapointed with the ending. Dont get me wrong, I liked the story but the ending seemed rushed, especially after so many titles leading up to the this one. I did like how the author utilized so much of the content from previous titles to finish. I think that someone who had not read most of the series wouldnt understand much of this one.

What a great read! long time coming, but worth the wait!

I throught it was great like all Flinx's books

Flinx and Pip once again do the impossible and nearly get themselves killed in the process. The entire series was narrated by Stefan Rudnicki, and his performance was, as always, exemplary. one of the best series out there!

There was a great deal of easy wrap up, and I'm a and At least 2 instances of is of revision to the original storyline. Too much repetition