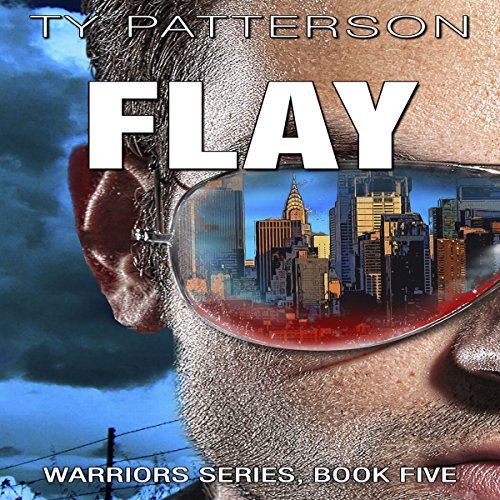 By: Ty Patterson
Narrated by: Steve Carlson
Try for £0.00

The Flayer, a serial killer in New York, cuts up his victims and posts videos online. He is planning a special show, one that will break the internet. However, that's only part of his plan. The second part will break the city.

Special Ops agent Zeb Carter, recruited to help the NYPD, has never come across a killer as evil and cunning as the Flayer.

The Flayer appears at will, disappears into the darkness, and all that he leaves behind his a mutilated body.

As the body count rises and New Yorkers turn on the police, the Flayer amps the pressure. He releases a video of his killing and makes a chilling promise. His next killing will break the internet - it will be live.

Zeb Carter has few clues; the only lead he has uncovered suggests that breaking the internet is not the Flayer's sole motive. He is building up to a terrifying climax the likes of which the city hasn't faced before…

Zeb decides to come out in the open in order to draw out the Flayer; however he might be too late. The Flayer has already set his plan in motion.

The city that never sleeps is heading to a catastrophic nightmare.

'Hotter than the inside of a gun barrel.'

What listeners say about Flay

"Prime time viewing at the House of Flaying"

As with all of this author's work, Flay is well written, the protagonists are fully defined and feel real, even the secondary players, and, a!though action packed, it does not rely on fight scenes alone to excite and maintain the building tension. A good story, built primarily around the hunt for The Flayer, a viscous serial killer who leaves no clues other than messages sent to the victim's family and the police, but which also tracks a terrorist cell intent on bringing their own variety of death and destruction into America. The storylines coverage as both are tirelessly tracked by Zeb Carter and his team over several months to the explosive ending.I can highly recommend it to anyone who enjoys action, thrillers or police-type procedurals

The wrong narrator can easily ruin the enjoyment of a good book but this is not the case here: Simon Carlton's reading was perfectly paced, clear, and he differentiated between characters without turning it into a one person dramatic production..I listened mesmerized to this audio production with virtually no break.

it was a very good book I have one problem it said it was book no five but there is only four books all together where is five I brought the other three. Very fast pace excellent story loved it I received this book free for a honest review and unbiased option .

At its core, this listen centered around the chase for a deranged serial killer. But it was soooo much more than that. The cast of characters were intriguing. The author deftly blended two stories together that kept you on the edge of your seat. The narrator was the perfect compliment to the subject and made all the characters, good and bad, real and believable.

It's not a queasy blood and guts listen, although elements of both are present. It's a smart thriller with layers and layers and layers of compassion, mirth, distaste, love, humanity and lack of humanity, and it's all woven together for the best listen I've had in this genre.

This listen is book five in a series and now that I know it exists, I'm going to find all the earlier books and get this story line, these relationships, from the beginning.

Very slow start, but good in the end.

The author provided me with a complimentary copy of this audiobook in exchange for an honest review. The book had a very slow start for me and honestly if I had been reading the ebook or paperback version I probably wouldn't have finished it. It did get better, but it jumped around so much that it was hard to remember what was going on. And the date header at the beginning of each chapter was just annoying. It wasn't just one day; it was a range of dates, but then it didn't seem like that much time passed in the actual storyline.

Quite a thriller. Very creepy. I felt it could be a true story.

Very well written and enjoyable book.
Even though this is the 5th book in the series I don't think it's necessary to read the previous books in order to enjoy this one.

Plenty of suspense, intrigue, action and twists that keep you glued to the story.

Steve Carlson did a fantastic job with the narration. Great voices for all the characters. Nice even pacing. Clearly spoken. Brings the emotions of the characters and the situation to life.

This is my first Ty Patterson book, all I can say is I've been missing out. I need to go back and catch up with the rest of the series.

This audiobook was provided by the author, narrator or publisher at no cost in exchange for an unbiased review courtesy of AudiobookBoom

wish this happened in real life

If only we had real agencies like portrayed in this book, the United States might have a chance against terrorism. More audio books please.

Flay by Ty Patterson is another great book full of action, suspense, and mystery. The book is wonderfully narrated by Steve Carlson, who brings life to all of the characters.

The story is about a serial killer, the press calls the Flayer, because after his killing, he cuts off his victims skin, and other body parts. As the book progresses, Flayer is joined by a terrorist know as the Goul, who beheads his victims. Both post their killings to the Internet. Together they plot a double murder.

Zeb Carter and his crew join forces with the New York Police to catch the deadly duo. You will have to listen to the book to find out more. Ty Patterson has written another outstanding book in the Warrior Series.

What did you love best about Flay?

The actual step by step detail of hunting the killer.

What was one of the most memorable moments of Flay?

When the terrorists joined with the flayer.

Have you listened to any of Steve Carlson’s other performances before? How does this one compare?

No i have not

Not quite but was almost there.

This audiobook was given by the author, narrator, or publisher at no cost in exchange for an unbiased review via Audiobook Boom.