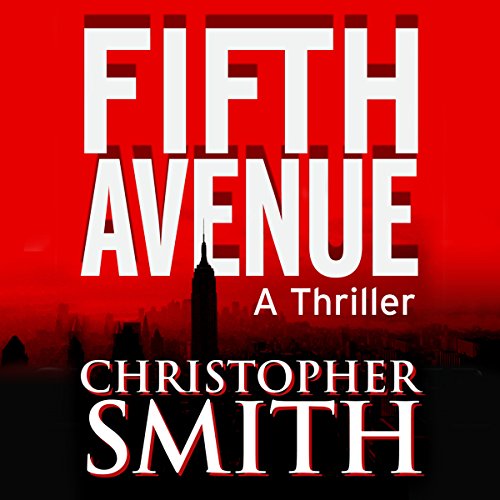 By: Christopher Smith
Narrated by: George Kuch
Try for £0.00

Look beneath all the power and all the wealth that represents New York City's Fifth Avenue, and you'll find greed, blood, revenge.

In the thriller Fifth Avenue, each intermingles within a revered society that is unprepared for what's in store for it when one man finally strikes in an effort to destroy another man for murdering his wife thirty-one years ago.

Louis Ryan is that man. George Redman, his wife, two daughters and their close friends are his targets. Both men are self-made billionaires who came from nothing to stake their claim to Fifth Avenue. But when Louis Ryan hires an international assassin to literally rip the Redman family apart, a series of events that can't be stopped catapults them all through a fast-paced, hard-edged thriller in which nobody is safe.

Secrets are revealed. The Mafia get involved. And George's two daughters, Celina and Leana Redman, come to the forefront. More than anyone, it's they who are caught in the throes of their father's past as Louis Ryan's blind desire to kill them all takes surprising turns in his all-out effort to see them dead.

What listeners say about Fifth Avenue

I found this hard going, the voice & the hissing in the background put me off & I had to return this book

What would have made Fifth Avenue better?

Everything- this is horribly narrated- delivered with a creepy yet boring monotone with a ssssnake like leaky tire hiss in almost every word. The writing couldn't be more adolescent with choice of words and dialogue. This just screams very tacky mini-series on some bad cable channel.

What was most disappointing about Christopher Smith’s story?

Would you be willing to try another one of George Kuch’s performances?

If you could play editor, what scene or scenes would you have cut from Fifth Avenue?

I never would have published this attempt at literature.

See all of the above. I recommend using credits elsewhere if you're a subscriber. If you're not- a martini in a 5th Avenue hotel is cheaper- and goes down more smoothly.

Such a tangled web of family intrigue....

Would you listen to Fifth Avenue again? Why?

I would love to listen to it again but I am sorry George the narrator sounded like he was whispering throughout - maybe it's my old ipod.

The intrigue, the family plots, the twists and the agony of family money and power can be felt as Christopher unfolds his story to us.

Would you be willing to try another one of George Kuch’s performances?

Only to the narration but I will read Christopher Smith again.

If you could sum up Fifth Avenue in three words, what would they be?

I was reading the book and bought the audio version too for not have to stop, while having the hands occupied, but : what a horrible whispering... destroying all the joy of listening. Unfortunately I have not listen to the track before buying it!
I recommend to do that first!
Now I'm reading the second book "Running of the bulls", but the audio version is also narrated by George Kuch! Bad luck!
In my opinion Scott Brick would have been the better - if not the best- option for a good thriller like this.

The first and the best!

Have read Fifth Avenue twice, each time liking it more. Now, listening to it has created an even more solid story line. George Kuch is an outstanding narrator. I have also purchased two other Christopher Smith books on audible and look forward to listening to them as well.

Although the plots and all of the characters were hard to keep up with, we still enjoyed the book and happy to see Christopher Smith wrote more. Anxious to see what book two is all about.

What disappointed you about Fifth Avenue?

The story was just dull. The characters were privileged, rich, unhappy schemers. Too many characters with as much interest as paper dolls. Very slow to develop. Bad guys and good guys given away in the first 10% of the story.

Has Fifth Avenue turned you off from other books in this genre?

Whispering, wheezing, struggling for air, like a dying man trying desperately to tell me something unimportant at great length.

I didn't finish. I restarted the book at a couple of different times to see if I might develop an interest in it, but it didn't catch on with me. It was just too tedious.

Why is he whispering?

OMG the narrator whispered through the entire reading. I had to have the volume all the way up. It made it harder to get through. However, the story was good; a little drug out in some places but not enough to give up on it. One pet peeve: saying "draw" instead of "drawer".