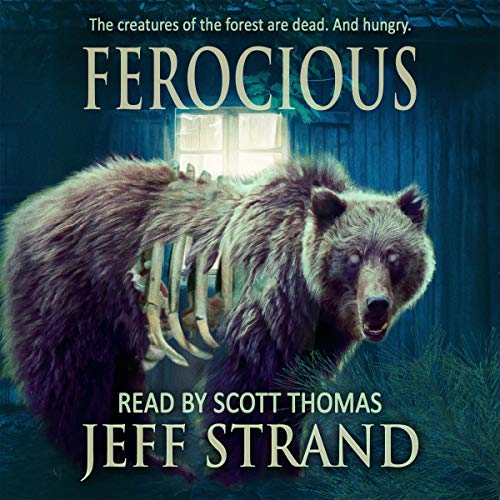 By: Jeff Strand
Narrated by: Scott Thomas
Try for £0.00

From the Bram Stoker Award-nominated author of The Haunted Forest Tour and Wolf Hunt comes another action-packed over-the-top creature feature!

Rusty Moss has raised his niece Mia since she was a baby. Now that she's almost 18, he's worried that the life he's given her - living off the grid in a cabin deep in the woods - is holding her back from her full potential. But that angst gets pushed aside when the undead forest animals arrive.

At first it's just a squirrel - shockingly violent and almost impossible to kill. Followed by a grizzly bear, also aggressive and resilient, even when point-blank shotgun blasts to the face are involved.

Now the cabin is surrounded by all manner of zombie creatures. Rusty and Mia have no way to call for help. The truck that could take them to safety is three miles away, stuck in the mud.

But Rusty and Mia have their courage. They have their wits. And, most importantly, they have an ax and a fully fueled chainsaw...

What listeners say about Ferocious

Terrifying, but funny in parts too

There are several reason I enjoyed this book. First is the horror and suspense of the situation that faces Rusty and Mia. But I also like Strand’s black humour throughout. Sarcasm and the way it was very well narrated made this to me a case of black humour and terrifying horror. I like it too because it’s set in one setting so to speak. The scene never changes from Mia and Rusty and their fight for survival. So we don’t have lots of other characters to get familiar with as we do in some books. I enjoy that about Strand’s books. He only uses the minamum and necessary amount of background before the horror starts. He seems to enjoy "stranding" people in forrests though against evil. The haunted forrest tour is a classic example of this. (Excuse the bad play on words!) Great book and excellently narrated to boot.

Jeff Strand doing what he does best.

Jeff Strand delivers another great mix of horror, gore and humour in this fantastic story of what would happen if the zombie apocalypse was more animal based than human.

Minimal cast in this story means that you will care for the two main characters all the more.

The narration by Scott Thomas is great as always and he once again seems to have a perfect ability to bring out Strand's dark humour during the terror.

If you've read a lot of Jeff Strand, you pretty much know what your getting here.
So Is it any good?
Hell, yeah! It's great fun.
His books always have a breezy flow about them, they don't require a lot of concentration.
Fun horror at its finest.
Recommended.

My first foray in to Strand's mind, and I enjoyed it. Rather ludicrous concept (zombie animals - I laughed so much) but sometimes I need something rather ludicrous. Nice and gory with comedy mixed in with the horror aspect. Reminded me a bit of Evil Dead which is no bad thing. Narrration was good. Overall, an enjoyable piece of comedy-horror.

I was given this free review copy audiobook at my request via Audioboom and have voluntarily left this review.

I think this is going to be on my best of 2019 list!! This was hilariously brilliant and I devoured it.

The story centers around Rusty, who lives miles from anybody because he hates to interact with people. He loves his solitary life, until the day a lawyer turns up with devastating news and his baby niece in tow. Now Rusty finds himself a parent to a little girl called Mia. Fast forward a few years and Mia is all grown up. At the cabin, things turn weird when a squirrel attacks and they have a really hard time killing it. They decide to take it to town to the vet to see what was up. No-one believes the fact that the squirrel was hard to kill and kept going even after it had a hole through it's chest. On the way home the car gets stuck so they are forced to walk the 3 miles home. Late at night Rusty hears a noise and what he sees is the start of a fight for their life.

While it starts out slowly, things soon pick up and it's pretty much non stop till the very end. Gory, gruesome yet filled with laughs and chuckles, this book was awesome. I've read some of this authors horror comedy before (Wolf Hunt) and loved it, but this one was even funnier and bloodier. The duo have to fight their was through a wood filled with undead animals and while it's filled with the horror you expect, it's also got some incredibly funny banter between the two which had me laughing out loud.

Fast paced and ferocious, this book is a must read. If you are a fan of this author then you will love it, if you've never read this author before, you will still love it. It's such a fun, darkly delicious book and is firmly on my favourites list.

It shows that the narrator, Scott Thomas, had fun reading this. He absolutely nailed the performance and really brought the book alive. His tones and inflections were perfectly placed and it made listening to this effortless.

This was a fun, quick listen. From beginning to end there were no boring moments. Sometimes short stories end still leaving questions. Everything was wrapped up neatly with a satisfying ending. Narrator did a great job.

I received this audiobook free at my request and am leaving this review voluntarily.

What a crazy fun ride! Plenty of action, humor, and horror, great characters, writing, and narration, Ferocious is a creepy wild romp that will draw you in and hook you from the start. This needs to be made into a film starring Bruce Campbell. I’d be first in line for a ticket.

Jeff Strand tells great horror stories, and while I typically shy away from zombie stories since they have become too played out, I wanted to hear Strand’s take on them. I wasn’t disappointed, he did a great job of telling a zombie story without retelling the same old story everyone else does. I thought his take was unique and a breath of fresh air for the genre.

As always, I really enjoyed both the characters and the story. Strand gets you close to the characters and develops a story that brings you in quickly. I was really surprised by how much agony they could endure fighting for survival. Their relationship was great and I loved the playful banter they had between each other. I really felt that Mia was lucky to have such a great uncle.

Scott Thomas did a great job with the narration. I liked his character voices and thought he really brought the story to life.

Very fun read, I love cabin in the wood horror stories, and I love zombies, and this combines the two! It's a short B-Movie type horror book. I want more of it, really fun read!

I've listened to a few books by Jeff Strand and have enjoyed them. But this one right here was horrible. Absolutely horrible. The story gives you no details or explanation on why, when, what. Your just listening to two people getting attacked and trying to survive. with a very disappointing ending. It started out well but after the first 10 attacks, it went on and on and on with the attacks which you become numb, and disinterested. Jaded. The only reason that I continued to listen is because I loved Rusty & Mia. Their love, loyalty, teamwork and bond they had for each other, along with the narration. Even with Scott Thomas fantastic narration, he couldn't save this story.😖

This was a great story. I’m always up for zombies but I think this was the first time I’ve read/listened to a story in which animals were involved. In a way, I think I might like the idea of zombie animals better than zombie humans because you never know (as was the case in the story) what kind of animal was going to show up next. It could be something small or large, whereas humans are typically more about the same size when compared to animals.

The narrator added to the overall story, in my opinion. So, I’d definitely listen to him again.

The best part of this story was the interactions between uncle and niece. The humor and sarcasm are totally on par with me and I loved it.

Ferocious is a new zombie like story with forest animals attacking people. I really enjoyed it! Good story told well. I loved the banter between the uncle & niece. The narrator is very good! I really enjoyed his voice. He did a great job bringing these characters to life. I received this for free for an honest review.

I love the narrator of this story

the writer of this book has quite the imagination. I'm sure a lot of people would have found it as engaging as I did, but if you enjoy off the wall humor this is a good book for you. The narrator definitely does this book Justice and more. He has just another enough sourcasm to make me laugh out loud a lot.

This book seemed to improve as it went along. It was humourous at times and I enjoyed the witty dialogue, but there was little depth to the story.