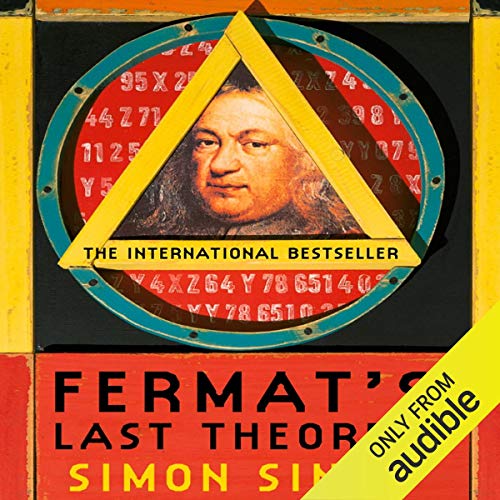 By: Simon Singh
Narrated by: David Rintoul
Try for £0.00

'I have a truly marvellous demonstration of this proposition which this margin is too narrow to contain.' It was with these words, written in the 1630s, that Pierre de Fermat intrigued and infuriated the mathematics community.

For over 350 years, proving Fermat's Last Theorem was the most notorious unsolved mathematical problem, a puzzle whose basics most children could grasp but whose solution eluded the greatest minds in the world.

In 1993, after years of secret toil, Englishman Andrew Wiles announced to an astounded audience that he had cracked Fermat's Last Theorem. He had no idea of the nightmare that lay ahead.

In Fermat's Last Theorem Simon Singh has crafted a remarkable tale of intellectual endeavour spanning three centuries, and a moving testament to the obsession, sacrifice and extraordinary determination of Andrew Wiles: one man against all the odds.

Look, I like maths so I was always going to find this book more exciting than your average guy. But there is absolutely no reason that your average guy couldn't find this just as exciting. your classic real life hero story, with a few twists of originality and also some clichés only excusable because they actually did happen.
no knowledge of maths required, in fact given what sort of junk we people get excited about nowadays, a lack if knowledge really shouldn't make the book any less enthralling.

A thriller of mathematical proportions!

As a non mathematician, being a student of engineering during the 90's, this book provides an easy read into the background of Fermat's last theorem. Then we have the hunt of the chase we're our hero is denied his prize as defeat is wrestled from the jaws of victory. What follows defies the imagination and you would think you are reading a piece of fiction. As with all great stories that you couldn't make up this delivers the punchline in a fitting manner. Simon Singh is to be commended for the presentation of this story, presenting it in a form that is easy for the non PhD mathematician to read and understand without making it patronising in anyway. And in the words of the great man himself "I think I will stop there".

Wonderful story, never thought there could be so much drama behind this tale and Singh describes it very well. The narrator is soothing and describes the very few equations that pop up carefully so it never becomes a problem. Definite recommendation to anyone with mathly inclinations.

The maths was beyond me. But the dramatic history of twists and turns was engaging

Right up there with the best scientific stories. You can't afford to miss it if you're into any mathematics. The content is brilliant, only a trained scientist like Dr. Singh could have achieve that... The travails of 8 years are well covered, text is friendly enough for laymen, at places, exposure to high school algebra helps but isn't a block. Narration is top class, however, explanation of figures warranted more attention - not a dampener though. Overall a five star effort, credit to the protagonist, Dr. Wiles, his support systems, giants on whose shoulders the proof stands tall, and of course, the suthar, for a job well done indeed.

Interesting insight into the world of mathematicians without the math. Simon Singh is a very skilled story teller.

I have a truly remarkable review of this book

Unfortunately my word count is too small to express it here!

I became completely immersed in this story, I'm a mathematical amateur and still found it completely fascinating and easy to understand. I will be moving on to another Simon Singh book, immediately.

A skillfully told story of not only Fermat’s last theorem but also of the history of mathematics. Very well written and narrated, the book reads like a great detective story. Highly recommended.

An incredibly well written biography of mathematics that would intrigue anyone. The knowledge is elegantly taken out from the esoteric and made understandable without losing its beauty.

The most amazing book I've read