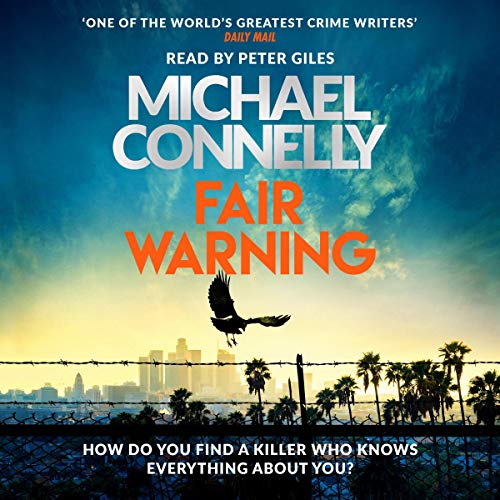 By: Michael Connelly
Narrated by: Peter Giles,Zach Villa
Try for £0.00

Veteran reporter Jack McEvoy has taken down killers before, but when a woman he had a one-night stand with is murdered in a particularly brutal way, McEvoy realises he might be facing a criminal mind unlike any he's ever encountered.

McEvoy investigates - against the warnings of the police and his own editor - and makes a shocking discovery that connects the crime to other mysterious deaths across the country. But his inquiry hits a snag when he himself becomes a suspect.

As he races to clear his name, McEvoy's findings point to a serial killer working under the radar of law enforcement for years and using personal data shared by the victims themselves to select and hunt his targets.

What listeners say about Fair Warning

I was really looking forward to this book and so far the storyline is engaging, exciting and it’s great to see Jack back.

The actual editing of the story and narration is not doing the book justice. At the end of two or three chapters so far the narrator is cut off. We are losing a sentence or two of the work.

I felt that this book is a little jaded, I am getting fed up with the self opinionated characters.

The story was OK but I don't feel that I would have missed out on anything if I'd given it a miss.

Enjoying the story so far, but as a previous reviewer has reported, chapters 8 and 9 cut off before the finish, haven’t got any further than that yet.

I tried so hard to finish it

First I like to say I am a big Harry Bosch fan, love the books. So I get that this needs to differentiate with that character. I enjoyed the first book, got through the second, but this one I have given up. Don't like the repeat story, don't like the character representation and the narration is a complete wind-up. I know I am typically English and tend to be a little laid back, but who goes through the day basically arguing and upsetting all around them. It is a constant theme and it grates. I know the narrator has most probably been instructed to read in that way, but my usual trick of speeding up the reading just to get through it doesn't work as the result is making him sound even more neurotic. The story and narration are dreadful and I don't get the overall 4.5 rating. I will try to finish it and come back if I get there...

Unlike Connelly's other major characters (Bosch and Mickey Haller) its very difficult to like Jack MacAvoy who seems to want the story at all cost as opposed to doing whats right. Not my favourite, Bosch and Haller much better

it took me a while to get my head around jack again, it's been a long long time since the last full blown outing.
after this the storyline was great with some cool twists and turns.
highly recommended.
Great narration from both and a story that held me close to it .

'Fair Warning' is a really gripping and engaging thriller. It is beautifully read and a joy to listen to. Michael Connelly is always great with his research and the plot's many strands have a contemporary and authentic feel about them. That the book so effortlessly and credibly glides along is a real testament to his skill as an author and if the definition of a thriller is that you always want to know what happens next then this novel, once again, ticks that box. He really is the best of the best. Also, do listen to the excellent interview at the end.

It's Michael Connelly. There's no showboating. You get solid engrossing, forward-driving, wish I had time to listen to the whole thing today, story. Believable characters with their own voices, situations you can imagine happening, never a fault in the plot. Great stuff.

Michael Connelly and Peter Giles are a dreamteam

Loved Connelly letting his journalist side shine in this novel. Amazed at the way he skillfully blends fact and fiction in such a thought-provoking way. He had me doing my own research into the topics he brought up as soon as I was finished with his book. This one will definitely leave a lasting impression.

Giles is officially my favourite narrator. Heard him narrate a few different characters now and his performance is always impeccable.

A poor substitute for Bosch

I’m not a fan of Jack, sadly. I have really enjoyed all the Bosch, Ballard and Haller characters and was hoping to add another to my list of Michael Connolly winners. Sadly, I found the story a bit weak and the writing joy as thorough.
The English accent needed some refinement but I could live with that.

I have every Connelly book in my library so I am a real fan and love most of his books. This book did not disappoint.
Journalist Jack McEvoy works for an Internet news site called "Fair Warning" and usually investigates situations that affect consumers. When he's questioned by the LAPD about the homicide of a woman he had a one-night-stand with, he becomes interested due to the way she was killed. He senses there might be a story and finds that the victim also had told a friend that she had been a victim of cyber-stalking. Jack sets out to learn all he can about Tina Portero and soon finds himself down the rabbit hole. Soon he has information about four similar deaths and all of the women had turned their DNA over to a company known as GT23. All of them seem to be the work of one person -- The Shrike.

This was great writing and lots of action with details galore. Although two other books by this author feature Jack McEvoy, this worked fine as a standalone. (I listened to THE POET and also THE SCARECROW again before the book was released to refresh my memory. Both great books) The listener is immediately drawn into the story and the well-drawn characters are believable as the narrative continues relentlessly to the climax. Who is the elusive Shrike and where will he strike next? The really scary stuff within actually has to do with the concern about the DNA that so many willingly put in an envelope and mail to these companies. For, you see, government oversight of the DNA analytics industry is a bit lax.

Another interesting aspect of this novel is that, even though this book is a work of fiction, the news site "Fair Warning" actually exists and does watchdog reporting as described. The science is real. The dangers are real.

Jack McAvoy is so frustrating

Jack McAvoy is so frustrating, so consumed in himself. He could have otherwise ended up with the woman he yearned for.

Story to think about

Love Michael Connelly, all the cases and all his books have a moral behind it and it makes you this twice before you just jump into the unknown
Thank you