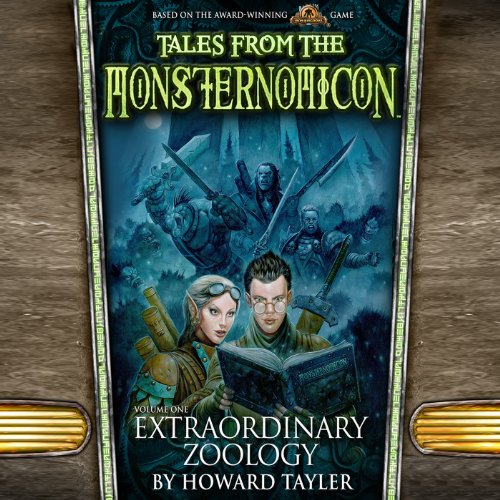 By: Howard Tayler
Narrated by: Scott Aiello
Try for £0.00

Professor Viktor Pendrake is a legend in his own time and is the foremost expert in extraordinary zoology. His research demands he place himself in peril to directly observe and interact with his subjects, a peril his assistants must endure as well.

Bookish Lynus Wesselbaum is the picture of a scholar-in-training whose days are often spent sifting through the vast stacks of tomes within Corvis University. Yet Lynus has earned his place as Professor Pendrake’s senior assistant professor, having accompanied his mentor in the field and survived countless encounters with the most dangerous flora and fauna of western Immoren. Lynus is fortunate to be joined by Edrea Lloryrr, a young but eminently capable Iosan arcanist who also assists Pendrake and brings a unique perspective. When word comes of a new menace plaguing the remote villages around Corvis, both Lynus and Edrea find themselves swept up with Pendrake in an adventure that will force them to confront a primeval force of absolute destruction.

What listeners say about Extraordinary Zoology

As a fan of the game I picked this book up knowing I'd enjoy it.

I loved the referencing of the book for the monsters, we have joked about this in our games.

I enjoyed following the main characters on the travels through this adventure, very much like an Indiana Jones just for moster hunting.

Okay story line but a bit abreviated. Voice performance was okay over all but could have been better for Pendrake's character. I was not blown away or underwhelmed. Just a good story for fans of Warmachine and Hordes.

Class is in sesion