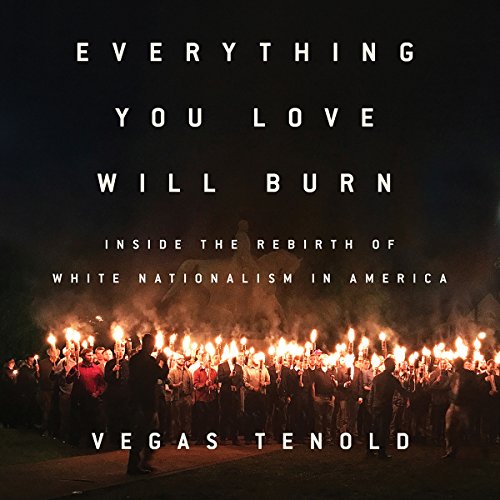 Everything You Love Will Burn

The dark story of the shocking resurgence of white supremacist and nationalist groups, and their path to political power

Six years ago, Vegas Tenold embedded himself among the members of three of America's most ideologically extreme white nationalist groups - the KKK, the National Socialist Movement, and the Traditionalist Workers Party.

At the time, these groups were part of a disorganized counterculture that felt far from the mainstream. But since then, all that has changed. Racially motivated violence has been on open display at rallies in Charlottesville, Berkeley, Pikesville, Phoenix, and Boston. Membership in white nationalist organizations is rising, and national politicians, including the president, are validating their perceived grievances. Everything You Love Will Burn offers a terrifying, sobering inside look at these newly empowered movements, from their conventions to backroom meetings with Republican operatives.

Tenold introduces us to neo-Nazis in Brooklyn; a millennial Klanswoman in Tennessee; and a rising star in the movement, nicknamed the "Little FÃ¿ by the Southern Poverty Law Center, who understands political power and is organizing a grand coalition of far-right groups to bring them into the mainstream.

Everything You Love Will Burn takes listeners to the dark, paranoid underbelly of America, a world in which the white race is under threat and the enemy is everywhere.

"Vegas Tenold's work is the best sort of journalism: immersive, insightful, and beautifully written. An indispensable guide for anyone who wants to understand what makes the far-right tick, why it's galvanized now, and where it's likely to be heading." (Jamie Bartlett, author of The Dark Net and Radicals Chasing Utopia)

"In this in-depth look at the growth of white nationalism, journalist Tenold presents a comprehensive portrait of supporters' beliefs, worldviews, and aspirations.... A perceptive, if terrifying, look at the philosophies that persist throughout the United States, including an examination of their roots, and how they contribute to the viciously held beliefs of white nationalists." (Library Journal)

"Ever since Tocqueville, some of the keenest observers of American society have been foreigners, able to see what locals might take for granted. In this book, Vegas Tenold takes us inside the varied world of the extreme right. He gets us so close that we can see every pore of paranoia, every follicle of delusion, every unhinged ligament of logic-thus rendering them both more human and more terrifying at the same moment." (Michael Kimmel, author of Angry White Men)

"A penetrating portrait of the men and women who are trying to instill fear and terror in our community. Vegas Tenold has done a great service by exposing their toxic ideologies in this must-read book." (Ibram X. Kendi, National Book Award-winning author of Stamped from the Beginning)

What listeners say about Everything You Love Will Burn

Pintoresque, almost TLC reality show-like chronicle of the lives of the most hateful people in America. Vegas must have been very patient at first, but you can notice he was almost caught up in their "kindness" and "charm", brokenhearted by their bigotry when they are "such nice people" to him (you know, a white guy). Also quite surprising-not-surprising the amount of times these xenophobic racist people would eat at a foreign food restaurant. "Hong Kong Garden" by Siouxsie still rings true, unfortunately. But they do love their potato salad.

an important and powerfull book. in my opinion it should be required reading for everyone who wishes to try to understand why the alt-right seems to be on the rise. the author has sympathy with many of the right-wing racists he describes. but abhors their views. the book leaves you sad . sad that so many people are ready to spend their energy on something so destructive as hate, while some of them try to dress up their beliefs as resonable and positive. after all,, they are only trying to make the world a better place (!).
the book is well read by the author.
i will definitely be listening to it again.

Resurgence of White Nationalism, Described from Within

I do not think that the author realized the importance of this book at the beginning of his research. He tells the story of people on the fringe of society, the leaders who captivated them, the unpleasant realities of their ideology and practice, and how white nationalism found new life in the rise of Trump. The author has firsthand experience. Well worth reading or, as I did, listening to on audio.

Learned a lot and applaud the lack of over emotional tone. A picture white nationalism as a diverse collection of groups, beliefs, individuals and behaviors.

this is an important book, but it is tough to hear. the content is so realistic that I found myself both crying and having to take breaks

Tenold does a fantastic job telling his sometimes terrifying story of his time with nationalists.

Great read/listen. Vegas does a awesome job shedding light on the white nationalist movement in America.

A first hand account by an in the field journalist

I've been reading a lot of alt right / hate group books lately. This didn't anything new in a macro sense but it did give me a lot more first hand data about the far right. It humanized the far right, and while that may sound like condoning the behavior, the book does not do that. But the people involved in these extremist groups are indeed people and the author presents them to us.

Well researched and important book. Very readable. Nice contribution to the understanding of white nationalism and the contemporary far right.