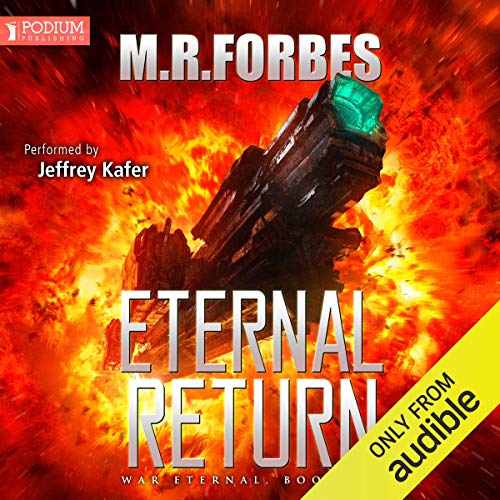 A memory recovered...a weapon forged...a showdown an eternity in the making.

Colonel Mitchell "Ares" Williams has won battles before. So while the recovery of the eternal engine and the emergence of a powerful new ally have given him hope that he can save humanity from enslavement and annihilation, he knows the war against the Tetron is far from over, and victory far from assured.

When a mission gone sideways finds the Riggers cut off and the enemy closing in, Mitchell has no choice but to forget about strategy and improvise, risking everything in a last-ditch effort to bring the starship, Goliath, back where it belongs.

Because if he doesn't, there won't be any battles left to win.

What listeners say about Eternal Return

This was much better, I think sometimes there has to be a little lull in the story, so I can almost forgive MR Forbes for the previous much slower book. :) This was a lot quicker and reactive. And I enjoyed it a lot. No spoilers, and I do hope that there's another coming.... after all I think there's still a few loose ends.

You have to listen to it

another great book in a great series!
I stumbled on the works of Mr Forbes last year and have so far checked out several series of books by him, enjoying all of them!
hope the great work continues!!

another rollercoaster of an emotional high, same awesomeness in a whole new setting. again leaving me wanting the next book more and more!

Again, M. R. Forbes writing is very good along with Jeffrey Kafer's narrating performance. While there are different situations that occur in this timeline, they play out in a mostly predictable fashion as has happened in past book installments. Forbes does include other characters but most of them either don't play a significant role or are used as cannon fodder later. Some of the betrayals were telegraphed well ahead of time and some of the mistakes are rookie errors that seem odd occurring from 1st tier characters. The ending came off rather rushed such as how Cathy and Michael were saved from the Watson clones and I found the abrupt ending less gratifying than I had hoped for.

I just wish these books were longer. 8 hours is a bit short for the price. I found myself getting lost in the action over and over. Take more time to tell the story, don’t leave your readers lost.

M R Forbes has a weird sense of propriety. It is truly silly that Forbes has even his most repulsive characters say 'frig', 'frigging', 'frigger'; and, now, 'Cluster Frig'.
This series is full of obscenity, profanity and sadism. There are even some references to pedophilia.
In context, 'frig' and its derivations are completely anomalous in a story so replete with truly offensive language and topics. If the author's inclusion of such things was an attempt at realism, then he has undermined his own work.
Overall, the storyline is good. However, the lack of continuity in the characters' details in very distracting. 😏

LOVED the series enough to listen twice in a row in its entirety. Well worth the credits for the ones not included with membership!

Okay, I sit in a wheelchair and several times during this book I wanted to stand up and cheer. None stop action. Do not let your mind wander or you will miss something important. Promise. Excellent writing. Well done sirs.

Great story, but not one to listen to haphazardly. Many important facts about the different time lines need to be read/listened to so future scenes make sense.

Found this series and author

Found this series and author through a random Facebook ad. Haven't speed reading it since. Well worth the time invested in it.

6 books in and can’t keep going

So some really great concepts, I love sci-fi and even a lot of the ones with poor reviews I’ve enjoyed, but I feel like I’m wasting my money continuing on in this series, some interesting moments but overall nothing is keeping my attention, I don’t yearn to listen to find out what is going to happen next, it’s disappointing, usually as a series moves through i can see how the author improves in his writing and the storyline sucks you in until you’ve read every book. It’s just missing in this series

Mr forbes is quickly becoming my favorite author, his books are filled with creativity and great stories.