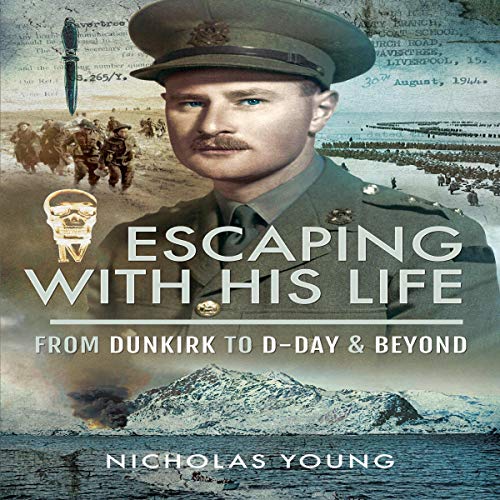 Escaping with His Life

Very few British soldiers could lay claim to such a full war as Leslie Young. Having survived the retreat to and evacuation from Dunkirk, he volunteered for the newly formed commandos and took part in their first operation: the raid on the Lofoten Islands. He fought and was captured in Tunisia. He went on the run before his POW camp at Fontanellato was taken over by the Nazis after the September 1943 Italian armistice. He spent six months on the run in the Apennine mountains aided by brave and selfless Italians, many of whom were actively fighting their occupiers. He eventually reached Allied lines but not before several of his companions were tragically killed by both German and American fire. On return to England, he immediately signed up for the invasion of Northwest Europe, and despite being wounded eventually fought through to Germany.

It is thanks to his son’s research that Major Young’s story can now be told. It is an inspiring and thrilling account that demands to be heard.

What listeners say about Escaping with His Life

A very interesting story of a true hero

I thought this was a very interesting story of a truly heroic man of the greatest generation. The deeds, heroics, actions and often harrowing expereinces of "Porky" Young from his time before the war to part of the BEF in France/ Belgium and escape from Dunkirk, to training with the early Commandos and raiding remote Norwegian Islands, to going back to his former unit to serve in North Africa (where he was captured) to his harrowing internment and escape from an Italian POW camp, the battle for Normandy, Operation Market Garden, further fighting in Belgium and Holland and then home in the fall of 1944. He somehow managed to survive it all, but his story was never fully told until his son found his diary (after his father's passing) and did some digging. a truly great read / listen.

the son / author narrates the story and at times can be clunky (technical difficulties maybe), his accents / portrayals are similar to one another and at times commical. He even seems to stifle some laughs here and there. BUT somehow that lends itself to the story and helps amplify it - voicing his own work, and giving his own father voice.

i also liked this because as an American this sheds light on to a personal story for British soldiers outside of the typical British Paras and SAS stories.

I would highly recommend, especially if you are a history buff such as me.

Great story and narration by the author. I appreciate the work he put into bringing his fathers story to the world.