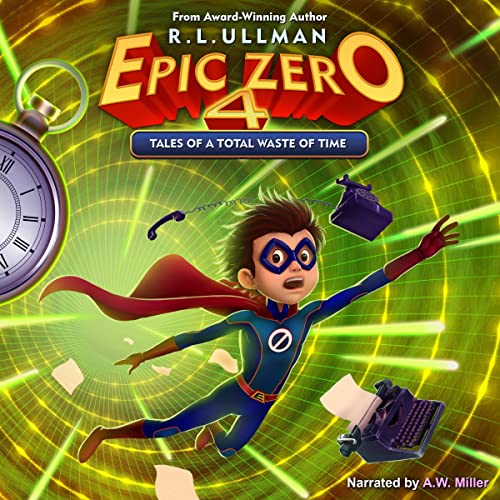 Epic Zero 4: Tales of a Total Waste of Time

Over 6,000 five-star series reviews on Amazon and Goodreads.

Elliott Harkness thinks he has it all figured out. He's (sort of) in control of his powers and finally living the superhero life. But after a not-so-heroic encounter with a time-traveling crook, Elliott wakes up one morning to discover everyone in his life is gone...and he might be next!

Elliott realizes the time-trotting trouble-maker has traveled into the past and changed everything! In order to fix his reality, Elliott must follow him. However, he can’t mess with history or reveal his true identity, otherwise he might set off a chain reaction that alters his present forever!

But his own existence is up for grabs when he meets his parents as young adults, and they hate each other! And that’s not all! A mysterious villain is searching for a powerful cosmic object that threatens the universe, and it may be buried in the past!

With the fate of the present riding on fixing the past, will Elliott become the epic hero he’s always wanted to be—or will he always be just an Epic Zero?

Epic Zero 4: Tales of a Total Waste of Time is the fourth book in the hilarious, action-packed series that will entertain kids, middle school students, and adults.

What listeners say about Epic Zero 4: Tales of a Total Waste of Time

THE RETURN OF META TAKER.

at first I wondered 'how does this play out the way history is supposed to'. but when the scene started to play out with Fairchild being meta taker I started to understand better.