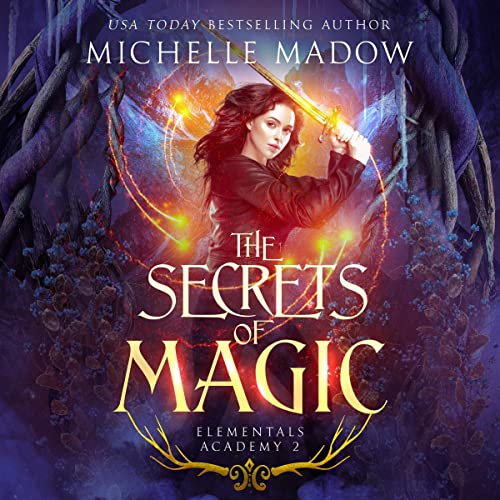 Elementals Academy 2: The Secrets of Magic

By: Michelle Madow
Narrated by: Patricia Santomasso
Try for £0.00

There are only so many secrets you can keep before you break.

A few weeks ago, Summer Donovan learned she’s a witch descended from the Greek gods. She was whisked away to an academy for witches to learn how to use the element she controls—air.

Except Summer doesn’t have air magic. Instead, she controls metal and gems—an ability no witch has demonstrated before.

The headmistress of the school has a theory—she suspects Summer is the first known witch descended from the god of the Underworld, Hades.

As if not knowing her magical heritage isn’t troublesome enough, Summer discovers she’s soul mates with the most mysterious guy at the school—Zane Caldwell. But Zane’s been keeping a secret of his own. He’s an immortal, and his heritage isn’t Greek. It’s Norse. He infiltrated the academy two years ago to spy on the Greeks, and now Summer has to make a choice: reveal the truth about Zane and risk his life, or keep his secret and turn on her people.

Because the Norse gods are rising. When they do, it’s going to be all-out war.

And Summer will eventually have to pick a side.

Dive into the second book of the Elementals Academy series by USA Today best-selling author Michelle Madow and get lost in this thrilling journey full of magic, romance, adventure, and twists you’ll never see coming!

What are you waiting for? Scroll up and click buy now to delve deeper into the mysteries of Elementals Academy!

What listeners say about Elementals Academy 2: The Secrets of Magic

As usual, loved every part of this.Kept me guessing, loved the story. Amazing read

I've read every one of her books within the past few months and none of them have disappointed! I was so excited about elementals academy and it definitely exceeded my expectations! adding in other mythological stories just took this to a whole new level for me. I hope she makes this into a series like she did with the big series of avalon. there are so many places to go the potential is endless. already read all 3 books but now I'm listening to this one before listening to the original elementals. love love love!!!!!

excellent book loved every aspect I can't wait to listen to the next one.