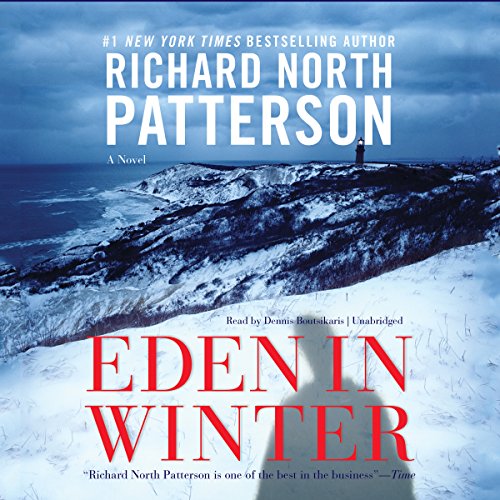 By: Richard North Patterson
Narrated by: Dennis Boutsikaris
Try for £0.00

Number-one New York Times best-selling author Richard North Patterson - the author of more than 20 novels, including Degree of Guilt and Silent Witness - returns with the dramatic conclusion to the Blaine trilogy: Eden in Winter, the final volume that completes the story begun in Fall from Grace.

Two months after the suspicious and much-publicized death of his father on the island of Martha's Vineyard, it is taking all of Adam Blaine's will to suture the deep wounds the tragedy has inflicted upon his family and himself.

As the court inquest into Benjamin Blaine's death casts suspicions on those closest to him, Adam struggles to protect them from those who still suspect that his father was murdered by one of his kin.

But the sternest test of all is Adam's proximity to Carla Pacelli - his late father's mistress and a woman to whom, despite her pivotal role in his family's plight, Adam finds himself increasingly drawn. The closer he gets to this beautiful, mysterious woman, the further Adam feels from his troubles, yet the closer he also comes to revealing the secrets he's striven to conceal and condemning the people he's fought so hard to protect.

An acknowledged master of the courtroom thriller, Patterson's Blaine trilogy, a bold and surprising departure from his past novels, is a complex family drama pulsing with the tumult of the time and "dripping with summer diversions, youthful passion and ideals, class tensions, and familial disruptions" (Library Journal).

What listeners say about Eden in Winter

Necessary but a disappointment.

Eden in Winter: Blain Family Trilogy Book 3 – Richard North Patterson: Unfortunately, I must admit I was somewhat disappointed in this third and final book of this trilogy. While it had the potential to be very good, a good third (or more) was relegated to a word for word repeat of much of the first book, inserted here and there as flashbacks. Not only was it irritating in that, if needed at all, a mere mention of those events would have sufficed, but they were inserted in such a way as to break the flow of the “continuation” of the story. I appreciate Richard North Patterson’s work, but in this instance, it is as though he couldn’t come up with enough to make the third as long as the first and second, and so improvised by adding in repeated text. Sadly, this made me feel as though I had been gypped more so than if he’d simply let the story flow and damn the length. 3 stars.

I was disappointed with the contribution of new material presented in this book. Much of this book is verbatim - cut and paste from the first book. I expect much more from RNP. Having said that, this does bring an end to the trilogy. As always, I love Dennis Boutsikaris as a narrator.

With Patterson you know you will get some legal issues and a love interest. The legal drama is mostly outside the courtroom this time. With this book you also get a tabloid reporter stirred into the mix. Adam Blaine comes back from Afghanistan twice to save his dysfunctional family from complete disintegration. Adam is a modern hero who, when he is not rescuing his family, needs to be rescued by them. We get to know Carla the "home wrecker" who, like Adam, is a determined character with a troubled past. I know this is book three of a trilogy, but I won't be surprised if the Blain family appears in another book.

Rehash of book one

I enjoy character development in a book series. This one is the third in the series. There were multiple copy & paste of the first book to ensure the reader understood the back story. I’d prefer the reader was told to read the previous book(s). Overall entertaining series.

the first two books in the trilogy were interesting and well written. not my top favorites by patterson but held my interest. the third book in the trilogy didnt even sound like anything by the writer. a lot of redundancy from the first two books. i would expect this story in a lifetime movie not from a man who wrote exile , degree of guilt, in the name of hon

Would you listen to Eden in Winter again? Why?

Yes, would recommend listening to the first two books. Eden tied in the early books history to make Eden a must read.

What was one of the most memorable moments of Eden in Winter?

Lots of twists in this novel. I would do an injustice if I pointed out my favorite parts for future prospective readers to see. Adam is the main character whio offers the answers to protect his family, Uncle Jack, and his FATHER. How Carla handled what she was dished throughout this novel...

Adams character as a whole kept the pages turning (listening).

Enjoyed all of Richard North Pattersons earlier novels as well. Author has an ability to bring out the best in each character with distinction however small the role may be.

Strong ending to the Blaine trilogy

This Book is the last of the trilogy that starts with Fall from Grace, then Loss of Innocence And ends with Eden in Winter. It takes place in Martha’s Vineyard on the island with the local folks and the wealthy entitled summer vacationers. Their stories meld together in this trilogy. This book wraps up the many secrets everyone has kept. The gut wrenching last tour of Adam’s in Afghanistan’s it’s aftermath.,The choices of an uncomplicated woman or a desired one is put to the test. This book could perhaps be a stand a lone there is a recap but I don’t think it would make much sense for the reader to do that.

I found it very frustrating that in an attempt to make this a stand alone book there were so many verbatim chapters from the first book in the series.

Would you be willing to try another book from Richard North Patterson? Why or why not?

Yes, as I have enjoyed his other books

Did Dennis Boutsikaris do a good job differentiating all the characters? How?

i liked him as a reader but his characterizations weren't that remarkable.

Did Eden in Winter inspire you to do anything?

As I am very aware of the many ways females are victimized in our and other cultures, I already play an active role in defending women's rights.

Fantastic book and series! The narrator, Dennis Boutsikaris, is a true performer!!

Love Dennis Boutsikaris reading anything and this trilogy was awesome! He is the reason I found this series and continued it. The second book was read by someone else due to the shift in perspective, but was happy to have Dennis read 2 out of 3 of them. Excellent story; bittersweet that it is over! Highly recommend!!!

It was all good.

Has Eden in Winter turned you off from other books in this genre?

Would you be willing to try another one of Dennis Boutsikaris’s performances?

If you could play editor, what scene or scenes would you have cut from Eden in Winter?

It was all good.

This book grabbed me and I could not put it down. I am a slow reader and usually only listen to my audio books on my drives. I listened to this while doing things around the house, on my walks and I finished it in a few days.