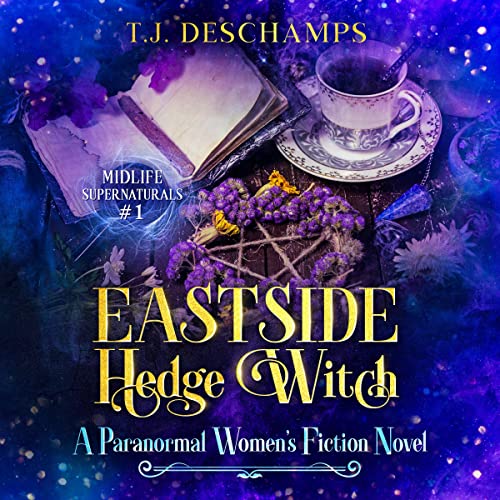 By: T.J. Deschamps
Narrated by: Angela Ohlfest
Try for £0.00

A paranormal women's fiction with intrigue, humor, and a main character who believes her wits are mightier than a sword.

Twenty years ago, I stole something that could win the war between heaven and hell. Don't get me wrong, I'm no do-gooder. I wanted to rule everything with the king of hell. However, I have serious qualms with killing eight billion people in order to get what I want. He didn't. Irreconcilable differences, right?

So I did what any witch would do; I faked my death and hid out in the Seattle suburbs, living as a mundane. Stay-at-home moms are practically invisible here! I had a good thing going until a hellhound showed up on my morning run. Guess you can't thwart the devil's machinations and get away with it forever.

Time to come out of the supernatural closet and save the world. Again. This time, I'm older, wiser, and will have a little help from my friends.

This book kept me enthralled from cover to cover. I love the way the author weaves all the different lores together. She has beautiful built this supernatural world. I can’t wait for the next book. I need to know how this plays out!!

I forced myself to listen to the entire book, hoping it would pick up and get better. I found the story interesting, mostly, but the pace of the narrator, the immature dialogs and the daughter calling her mom “mommy” just put me off it

This was such a fun listen/read! I jumped back and forth due to my schedule but I had to know what happened! I love the world building, the characters, the detail, all of it! So much diversity as well! Miriam was definitely a strong character who really always did what was right. I loved her discovery of herself along the way and how most of the leads were all over 40 (or hundreds or thousands of years older lol). I can’t wait for the next book!