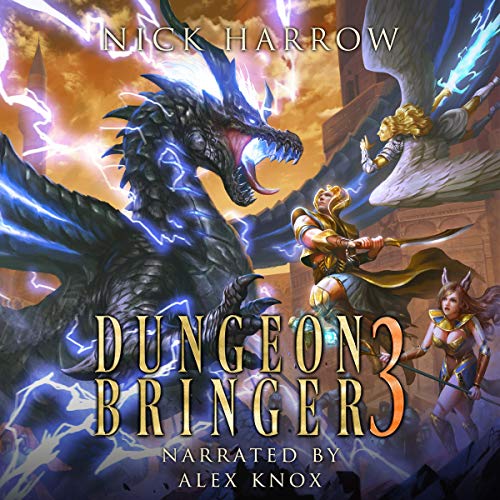 Claim a settlement. Build your defenses. Go to war.

Clay Knight never asked to be Lord Rathokhetra, and he certainly never wanted to rule his own city. But when his dungeon's advancement is blocked by the need for a support village, Clay has to claim the Kahtsinka Oasis and lead it to prosperity.

He also has to contend with unhappy merchants, persistent beggars, a satyr who won't take no for an answer, and threatening emissaries from the far-off King of Kyth.

With trouble brewing both inside and outside his city's walls, Clay must forge unlikely alliances with enemies old and new, all while watching over his fierce female guardians and mastering his strange new dungeon lord abilities.

Read the third installment in the best-selling Dungeon Bringer series now for a triple shot of unique base building, brutal bad guys, and ferocious monster girls!

What listeners say about Dungeon Bringer 3

This is a fitting end to this story ARC and a lot easier to get used to Knoxs narration as i remember his previous audio in this series so the change isn't as jarring.
The usual blindsiders and twists work great in the audio, as does the struggle and war come more to life as we listen.
Hopefully sales get another series arc going as i loved the characters and Clay stands tall as the kinda guy we could all be if give power and used it wisely.

could with less jabber, otherwise 10 out of 10. would recommend to my friends.

Starting to seem a little repetative.

No one good or important dies, bad guys cry and clay gets stronger. Plot reveal aside, the journey feels stale when it isn't reality shifting. Was looking for more jaw drops and got a bag full of stale, salty pretzels.

Check it out first and listen for yourself. Still a decent story.

So Far So Good

the story is a bit streamlined but the unique setting and world make it worth the read, also if u like dungeons and harems this is definitely for you.

Enjoyable against my better judgement

I enjoyed this book. It has amazingly bad dialogue. I'm not sure if the author has done this by intention or by happenstance, but the result is an easy listen that occupies one's time

Great addition to the series

I really like this series. Performance was great. Story is great. Looking forward to where this story goes now.