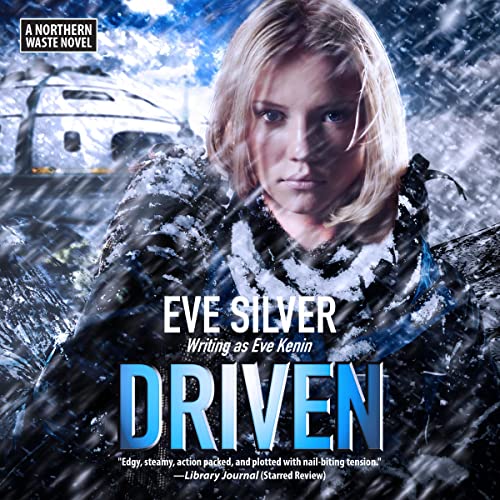 In the harsh Northern Waste where human life is worth little, ice trucker Raina Bowen has learned to keep her eyes open and her knife close at hand. She's spent her life on the run, one step ahead of the megalomaniac who hunts her. All she wants is to stay out of trouble and haul her load of grain to Gladow Station—but trouble finds her in the form of a sexy stranger called Wizard. He has the trucking pass she needs, and she has to drag him out of a brawl with the very people she's trying to hide from in order to get it. She may have rescued him, but Raina's not foolish enough to see Wizard as anything close to helpless. He's hard and honed and full of secrets—secrets that may destroy them both.

As they race across the Waste, trying to outrun rival truckers, ice pirates, and the powerful man bent on their destruction, Raina's forced to admit that trouble's found her. And this time, there's nowhere left to run.

What listeners say about Driven

When Raina and Wizard cross paths at first not realising they share this enemy but in the battle to just survive they realise they must work together so they can both reach their goals. They both very different people .

They is great chemistry between Raina and Wizard . We have action, adventure , romance Perfect

Raina Bowen is waiting to meet a contact at a truck stop before her route, but when he doesn't show she's about to abandon her post. The next thing she knows, she's throwing him on her bike to make sure he doesn't get killed before she gets her ticket from him. Wizard turns out to be nothing but trouble, but Raina is determined to finish her run which means she needs that pass. When Wizard shows her a different side, will she begin to trust?

If you're looking for a post-apocalyptic world that doesn't revolve around Zombies, this is the book for you!

Audio Review:
The two narrators meshed well together in this duet narration. I didn't get pulled out of the story because they blended everything very smoothly.

When I first started listening to this audiobook, I was concerned that I wouldn't like it. It had nothing to do with the plot. Lillian Yves was managing to narrate the story well but Vincent Lee Grayson sounded dull and a bit mechanical. I only mention this because I was tempted to stop but I didn't and it was so worth it. In fact, despite my initial impression, I think Vincent Lee Grayson did a fantastic job and I really enjoyed listening to this book.

Eve Silver has managed to fill this post-apocalyptic story with tons of action, fantastic characters and a fascinating backdrop. These were contrasted with dark characters and circumstances that are horrific in nature. Eve Silver even managed to weave science and technology into the plot in a meaningful way. I was riveted from almost the beginning!


The best part of this book is that it is the start of the series! I am absolutely going to read/listen to the rest!

It’s a great listen and an engaging story. I was thoroughly enjoying both the fight for survival and the love story. I couldn’t listen fast enough. I’m in for more of this world.

the story was very interesting and engaging. the characters well written and likeable. the bad guy was really chilling. the narration was faultless and I must say, I cannot imagine other narrators in these roles. Lillian's acting is so realistic! and Vincent switched between parts so effortlessly! both absolutely brilliant!

This is a Great Story involving a Extremely strong woman (MC) and a Genetically modified man who both have a personal mission to end areal Bastard of a man. Through out their encounters they reluctantly become entangled with each other. Narrators do a Great job with the various characters voices and the entire storyline.
The World Building is well described and well done, though COLD!!

Eve Silver wrote a sexy and exciting post-apocalyptic (waste) novel. Lillian Yves and Vincent Lee Grayson brought the story to life. Great job all around!
I received this copy of Driven for free and left an unbiased opinion.

So this was an interesting listen. I got this book for free and chose to give my unbiased review.

Both the author and the narrator were new to me. I rarely listen to MF books anymore but this was a great palette cleanser.

I was engaged and it was suspenseful and I just really wanted to know how it would end.

Both narrators were good and I have no complaints.

All in all a great listen.

Finding love in a desolate world

This story follows Raina and Wizard, two very different people whose lives were shaped by a common enemy. They cross paths at first not realizing they share this enemy but in the battle to just survive they realize they must work together so they can both reach their goals. Wizard was such a unique and almost comical character.

I enjoyed this story. It starts out a little slow because the author has to set up the desolate wasteland of a setting. Though, it does pick up as the story goes on.
I thought the chemistry between Raina and Wizard was great and really enjoyed their scenes together. It was interesting having Raina be confused at why Wizard does what he does and how his thinking works.

I think the narrators did an excellent job! They really got into the characters (especially the male narrator, he got into the almost robotic voice of Wizard).

Wow at first I couldn’t figure out wizard but i slowly warmed up to him….. was a great audio book…

Can’t wait for the next read…

This was a different kind of book. I am not a big fan of dystopian, but this was not bad. It was well written. Vincent Lee Grayson has a perfect robotic voice as an A.I. This a compliment lol! Lillian Yves voiced Raina very well. I liked how Wizard learned what it meant to feel for others, allowing him to love Raina.

At first I was wondering what I was listening to but I keep going and so glad I did. Right when I thought I had the characters figured out a good ole twist came crashing my way lol. The romance in this book was def different because I kept picturing a robot but like no a human and I’m sure many others did to because of how Wizard started as just a number and beat all odds to feel emotion. Seeing how Raina felt about her family in the beginning then hearing some mind blowing info to make her way of thinking change along with my own was very intriguing. I will def be looking out for book 2 in this series to see what’s next on their journey.

Definitely a Mad Max feel. Love the strong heroine who learned how to survive on her own. The storyline captivated me from the very beginning. Looking forward to more in this series!