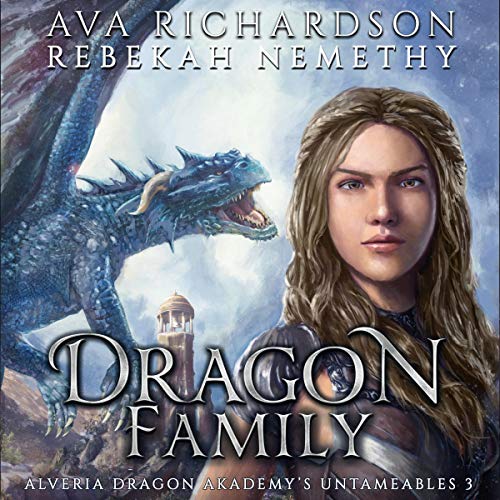 By: Ava Richardson
Narrated by: Rebekah Nemethy
Try for £0.00

The only way to save Alveria is to end the war - by any means necessary.

After horrendous losses among their ranks, the Untameables are still reeling, none more than Laini Unclaimed. The battles against the forces of Hel have stripped Laini of those she loves most. Now with Hel closing in, little hope remains to save the reincarnated gods trapped in the underworld, including the young man she loves.

Until she hears about the Book of Death.

Reportedly created by a powerful Seer, the book could provide her with the incantations needed to transport her friends back to the land of the living and restore their earthly bodies. However, finding it, either on earth or in the underworld, proves to be a challenge all its own.

When Queen Kaelan returns from the kingdom of Unger, she brings news that the situation has only grown worse. The darkness that engulfs the Alverian kingdom has spread worldwide - and Unger has joined with Hel.

Laini must race against the forces of darkness to restore her family and return the light to her dying world. But time is a commodity she no longer possesses. In a desperate bid to end the war, Laini makes a choice that will either save her home or lead to its destruction.

She takes the battle straight to Hel.

This novel contains violence and profanity.

What listeners say about Dragon Family

Not my favorite of her series, good nonetheless

This is the twenty-fourth book i have read/listened to by this author and I would listen to another. The books are not complicated, yet all carry little bits from other books that tie them together nicely. Some series are in the world where they just ride dragons, this is in the world where they can turn into dragons. I like the magic she gives to the dragons and tamers. This is in the same story thread as the Alveria Dragon Akademy series but about 12 years in the future. I like the Norse god touch to this series. I’ve still enjoyed this and am by no way sorry I’ve listened to it, however amongst all the trilogies of her’s I’ve listened to, this is lower on my favorite scale. That’s bound to happen though after listening to this many books.

This is the sixth book I have listened to by this narrator ( Rebekah Nemethy ) and I would definitely listen to another. She has wonderfully performed all her books I’ve listened to. She helps immere me in the stories. In this one again, she brings out the characters personalities and emotions. She does well with the male and female voices.

There are no explicit sex scenes, excessive violence or swearing. I think this is good for preteens and up.

I was given this free review copy audiobook at my request and voluntarily left this unbiased review.
Please feel free to comment on whether you found my review helpful.

This dragon family is all gods that have been reborn in new bodies. Hell is out for revenge and is not satisfied with just ruling the underworld but wants to rule the living world also. She has no love left for her siblings and is attempting to kill them permanently.

The fight is on as the other siblings had given another dragon the goddess of death's powers but were bonded to them. The fight continues and is action-packed all the way to a fantastic end that leaves you waiting excitedly for the next book!

A great end to a fantastic series!

Okay, whilst listening or reading this book, you have to keep the faith in the Gods to come out on top in the end.
There are set backs, but, the angst and drama is worth it, if you just keep the faith.
No, I haven't joined a cult or religious sect. I have listened, and felt devastation and frustration, alongside the characters. But, isn't that how a good story is meant to
make you feel, as part of the story, alongside those that you become like old friends with.
Yes, the penmanship of the author has to be applauded, with how this story wraps around you and pulls you in.

I actually chose this book by mistake. I offered to listen and review it thinking it was the third book in another series (I guess I like books by Ava Richardson). But I had agreed to evaluate it, so that is what I am doing, even though I have not listened to the first two in the series. I strongly recommend not doing this, since I had to start over several times to pick up on the characters and story. But once I did, I really enjoyed it. It is not a stand-alone book, but it was written well enough that I did not feel all that lost, and quickly became invested in the story and characters. So much so that I plan on getting the other two once I have listened to enough other books that I start to lose my memory of any spoilers.

I have to admit that I liked the fact that several of the main characters were dead. I gave an interesting wrinkle to the story

I was given a free copy of this audiobook in exchange for an unbiased review.

Having just finished book two I was so excited to have the opportunity to flow right into this book 3 in the series. I hate to wait once I get immersed into a story. This has been a fantastic journey and now look forward to diving into another great listen by this author. Perfect choice of a narrator. Which is so very important to an audio.
This audio was given to me free and I voluntarily gave this review.

This was another masterpiece by Ava. A great series and a great ending. The writing is well done, and very creative. Each storyline is thought out and perfected.

Great ending to the series. It stays interesting and full of action to the very end. Things get wrapped up nicely.