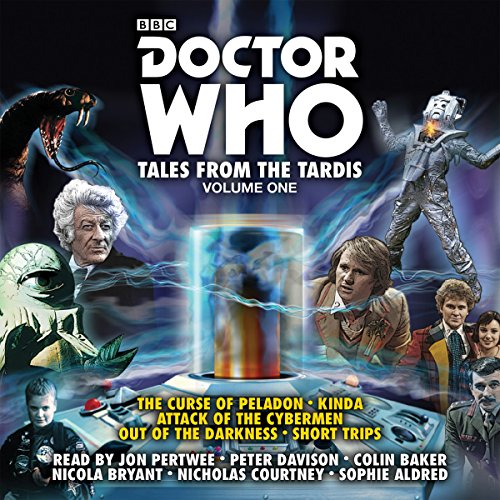 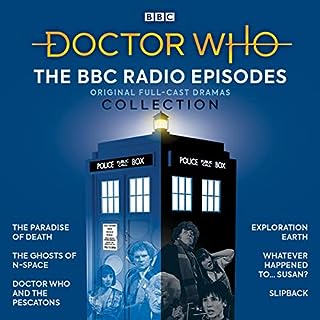 A new edition of the collection featuring each of the Doctor's full-cast BBC radio adventures—and more. Also included in this new edition is a 45-minute conversation with Elisabeth Sladen, recorded exclusively for BBC Audio in 2004. 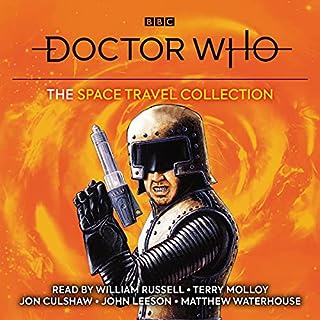 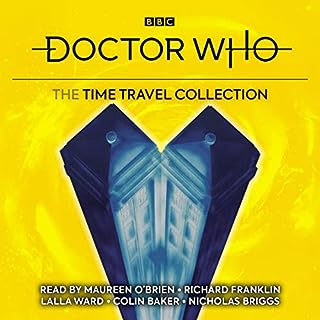 Four exciting novelisations of classic TV stories in which the Doctor and his companions traverse the Fourth Dimension. This collection includes Doctor Who: The Space Museum, Doctor Who and the Day of the Daleks, Doctor Who: City of Death and Doctor Who: The Two Doctors. 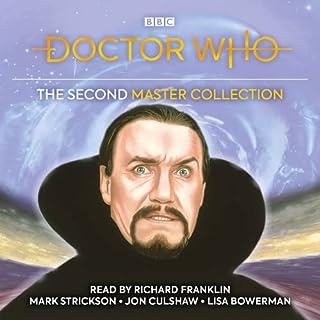 Five exciting novelisations of classic TV stories in which the Doctor and his companions encounter a colourful assortment of aliens. 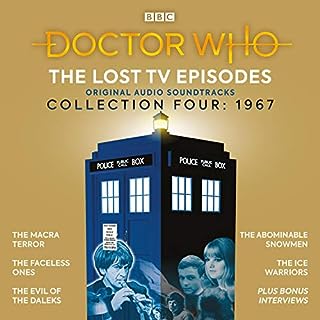 Absent from the TV archives, these stories survive in their entirety only as soundtrack recordings. Now remastered, with additional linking narration, you can enjoy them again: plus bonus interviews with Anneke Wills and Frazer Hines. 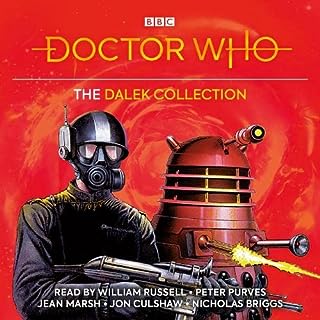 A new edition of the collection featuring each of the Doctor's full-cast BBC radio adventures—and more. Also included in this new edition is a 45-minute conversation with Elisabeth Sladen, recorded exclusively for BBC Audio in 2004.

Four exciting novelisations of classic TV stories in which the Doctor and his companions traverse the Fourth Dimension. This collection includes Doctor Who: The Space Museum, Doctor Who and the Day of the Daleks, Doctor Who: City of Death and Doctor Who: The Two Doctors.

Five exciting novelisations of classic TV stories in which the Doctor and his companions encounter a colourful assortment of aliens.

Absent from the TV archives, these stories survive in their entirety only as soundtrack recordings. Now remastered, with additional linking narration, you can enjoy them again: plus bonus interviews with Anneke Wills and Frazer Hines.

Five classic novelisations of exciting TV adventures set on distant planets! In The Sensorites, the First Doctor is forced into an uneasy alliance with a race of telepathic creatures from the Sense-Sphere. In Doctor Who and the Space War, the Third Doctor finds that a full-scale war between Earth and the planet Draconia seems inevitable. In Doctor Who and the Planet of the Daleks, the Third Doctor and Jo discover a vast army of Daleks waiting to mobilise and conquer on the planet Spiridon.

Six narrated TV soundtrack adventures starring William Hartnell and Patrick Troughton as the First and Second Doctors - plus bonus features. Absent from the TV archives, these stories survive in their entirety only as soundtrack recordings. Now remastered, with additional linking narration, you can enjoy them again: plus bonus interviews with Anneke Wills, and the BBC Radio 3 programme Dance of the Daleks.

Five classic novelisations of exciting TV adventures set on the planet Earth! In Fury from the Deep, the Second Doctor, Jamie and Victoria discover sentient seaweed threatening a gas refinery on the South Coast of England. In Doctor Who and the Pyramids of Mars, the Fourth Doctor and Sarah arrive in 1920s England, where plans are being laid to free Sutekh the Destroyer from his prison on Mars. In The Stones of Blood, the Fourth Doctor, Romana and K9 confront an ancient villainess on Bodcombe Moor.

Nine exclusive adventures featuring a multitude of Doctors and companions. The collection opens with a trilogy of stories set in the First World War—Men of War, Horrors of War and Fortunes of War—in which the First, Third and Sixth Doctors are pitted against a rogue element in time.

Five classic novelisations of TV adventures featuring the United Nations Intelligence Taskforce, led by Brigadier Lethbridge-Stewart. In Doctor Who and the Auton Invasion by Terrance Dicks, the newly regenerated Doctor grapples with murderous waxwork replicas and shop window dummies. In Doctor Who and the Cave Monsters by Malcolm Hulke, subterranean reptile men wake to find their planet overrun by humans. In Doctor Who: Inferno, a drilling project to penetrate the Earth's crust has potentially catastrophic consequences.

Twelve stories of excitement and adventure in distant times and places! This first volume of readings features:

The Curse of Peladon, read by Jon Pertwee
On a primitive planet, the Doctor and Jo encounter a delegation of aliens, including the Ice Warriors.

Kinda, read by Peter Davison
A serpent at the heart of paradise poses danger for the TARDIS crew and a human survey team.

Attack of the Cybermen, read by Colin Baker
The Cybermen are intent on a plan to change history...by crashing Halley's Comet into Earth.

Out of the Darkness, read by Colin Baker and Nicola Bryant
Three gripping original short stories featuring the sixth Doctor and Peri.

What listeners say about Doctor Who

Would you believe that this collection of Dr Wo stories takes a sudden turn for the better when Colin Baker turns up?
Oh sweet irony!
The first two stories are pretty uninspired TV adaptations read by Jon Pertwee and Peter Davison. Then Colin Baker reads one of the best Cyber Man stories ever and things really get going.
Along with the TV adaptations there are short stories that sound like they were commissioned as audio books. Readers range from Dr's past, to assistants to apparently random actor who mostly turn in good if uninspiring performances.
As you might expect from a TV series of such varied heritage as Dr Who, some of the stories are gripping adventure sci fi at it's best, some are plain old dumb 'run from the monster' hi-jinkery, some are apparently random and a bit dull (especially one about the Dr's train set coming to life).
Overall there are enough good & well told stories here to make it worthwhile, but it is far from essential listening and doesn't deserve a place near the top of your wish list until you've worked your way through the 5 star sci fi titles availible on audible.

Slow start, but it does improve.

Worth the struggle.
My review may be coloured by the fact that Jon Pertwee was always my least favourite Doctor, but he seems bored during this reading. The very definition of phoning it in. Baker adds a degree of energy and interest to the later stories.

Dreadful, and I'm a Doctor Who fan.

This is terrible, the first story is read by Jon Pertwee who sounds like a bored John Le Mesurier. I persevered and just about made it to the end. I couldn't finish the second story read by Peter Davison, it was so abysmal. I quite like Colin Baker so was looking forward to the third story but he did a voice for Peri which just made me cringe and that was enough to stop playback and remove this book from my iPod. Avoid. At all costs.

Very entertaining in the most part

Different narrators with differing effects on the story. very good in the most part, a little disappointing in some parts hence the 4 stars. I am a Who fan though.

Narrated by the actual actors playing the various Doctors over the years, this is a beautiful and engaging collection of short stories. The narration by the actors is without flaw.

The original shorts are worth it

The reversioned tv stories aren't anything to write home about, but the original short stories that follow contain some real gems.

Great stories with really excellent narrators! A must for any fan of the new series or old or just anyone who likes science fiction.

tales from the tardis vol. 2

I have always been a big fan of Dr. Who. This second volume is some of the worst writing and dramatization that I've heard; sorry I downloaded it. Volume one was good, not so with volume two.

Would you listen to Doctor Who again? Why?

What other book might you compare Doctor Who to and why?

Pretty much any classic target Dr Who Book.

Which character – as performed by Jon Pertwee and Colin Baker – was your favorite?

I was expecting that these were just audio rips of the classic TV series. What I got was actually the novelization of the episodes read by the Doctor whom they were played by. I don't know if these were the Target books or some other BBC book but either way it was great to hear Pertwee's voice again as the Doctor.

With the exception of the first story, this series is not worth the time and effort involved in downloading! The plots are absurd and silly. The best part are the musical segues between chapters and stories.

Some good some not

Never liked the peladon stories
Tho I like Pertwee, this is not his best

Goos, but not great

The TV episodes can be skipped, but the originals are still good enough to make this set worth listening to

Not exactly what I thought

Great stories, but it took a little took getting used to the format.

The narrators were great as well as the sound effects but it is a collection of stories with no real order. Once I realized that I could really enjoy the book.

This selection of audio stories is a nice variety of stories from various different incarnations of the Doctor. I would prefer having a separate audio book for each story, simply to make them easier to find and organize, but the stories themselves are generally good.

Much of this collection is made up of stories taken from the television show, read by the original actors. The short stories, while not lengthy, are a great addition to any Doctor Who fan's collection.