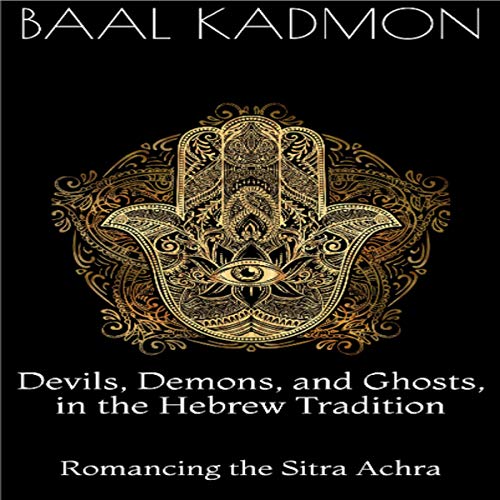 Devils, Demons, and Ghosts, in the Hebrew Tradition: Romancing the Sitra Achra

When we conjure up the idea of the devil and the demonic hordes in our mind, we are often thinking in the context of how Christianity has portrayed them. The devil and his supposed horns, the Exorcist’s battle with the demon possessed, the inverted cross, the Osculum infame (The Infamous kiss) or the Black Mass in which a young woman is sacrificed to Satan. All these are mostly influenced by Christian ideas in some way or another. The Prominence of Christianity in the study of demonology cannot be denied.

There is, however, a lesser-known branch of demonology. One that has not been Christianized, yet Christians too have been informed by it. It is far older than Christianity, one that traces it roots back to the dawn of humanity. A demonology that is little known, yet invaluable for those of us in the Occult. It is the demonological ideas found within the Hebrew tradition.

The Hebrew demonic tradition It is not as popular ONLY because no one has been able to bring all the pieces together, nor have they the ability to translate the source material from Aramaic and Hebrew to English. Most reiterate what has already been written, but with no foundational knowledge. In this book, I look to remedy that.

This is not a boast, I am simply stating the facts.

The Hebrew tradition has a rich and powerful Demonological tradition that is often not spoken of, even amongst kabbalists in fear that the demons and their minions will taint them or bring them bad luck. It is for this reason certain Jewish groups inundate their homes with magical talismans warding off the evil eye, the demoness Lilith and even the great demon Ashmodei (Asmodeus).

In this book, I will take you through an academic and magickal journey through the Sitra Achra; the other side of the light as it is understood in the Hebrew tradition. You will not only learn, but you will experience.

**Please note, this is not a book on the history of Hebrew or Jewish magick, although it will contain magick rites in it. This book is an elucidation on how the Hebrew tradition views demons and ghosts.**

In this book you will learn:

What listeners say about Devils, Demons, and Ghosts, in the Hebrew Tradition: Romancing the Sitra Achra

I loved this book

Everyone interested in the occult should be familiar with Baal Kadmon. This was the most straightforward and practical book I’ve ever found