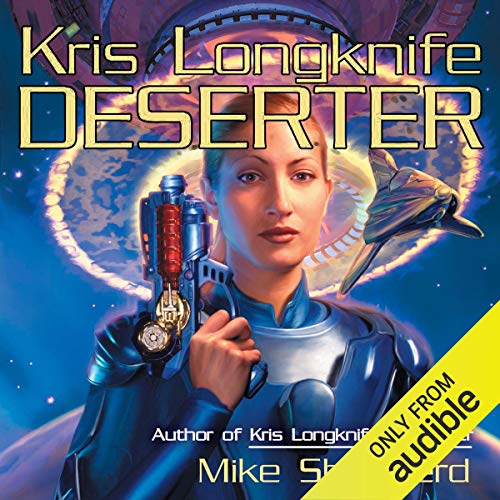 Kris Longknife had no choice about growing up rich and pampered. When she did have a choice, she joined the Marines. But now, a friend needs help halfway across the galaxy - and with a military heritage coursing through her blood, it's time for Kris Longknife to be a hero. Kris boards the next ship to Turantic, the last place her friend was seen alive. But there's more to the rescue than meets the eye.

Turantic is not only the most twisted hellhole in the galaxy, but it's also under quarantine because of a deadly plague. And after a sudden, suspicious loss of communication with the outside world, Kris realizes the length some enemies will go to for a life-threatening bait-and-trap. But she is willing to go even further - and deeper into Turantic's secrets - to survive.

What listeners say about Deserter

Kris is at it again

I have listened to 18 books in this series and I have decided to go through it again. I Love these books and I love this universe and I am enjoying myself again. Enjoying the time with Tommy and Nelly and Abby- fun times

Kris didn't want to be the Debutante her mother wanted or her Prime Minister father's campaign manager, so she joined the Navy. But now her Great Grandfather (possibly in retaliation) has made her a Princess. So she gets Abby. Nelly gets an upgrade and an alien chip to play with; and the attitude of an 8 year old. Tom gets kidnapped and the love of his life. Jack gets to see more of Kris than he expected and to keep Kris alive. If he can.

Same problem with the narrator: lines get read in the wrong accent for the character etc. I still liked it, have listened more than once and went on to get more.

There were parts of the first book, Mutineer, that I thought could have been improved and Deserter addresses everything I found lacking. Nelly, Kris’s personal pet computer, was not fantastic enough (probably a bit less powerful than the newest Android). In Deserter, Nelly gets a major upgrade. Nelly now docks into Kris’s head and talks with Kris mentally. Nelly also starts developing a personality, one of a spoiled Justin Bieber fan. In Mutineer, Kris seemed more a soldier than a 22-year-old chick. In Deserter, with no military-appointed mission to follow, our heroine gets a lot more fem. Thanks to Kris’s new governess, we have some serious wardrobe changes, clothes descriptions, and other womanly upgrades.

Unlike in Mutineer, there's cohesion with Deserter. The subplots tie to together smoothly, and dip back to Mutineer, making the story flow easily from Kris arriving like a princess on Turantic via a Titanic-like luxury cruise ship to her going incognito as a limping Arabic boy. She seamlessly goes from a whore, to a maid, to a pregnant girl in a burqa. I also felt that Mutineer lacked the politicking I expected from a prime minister’s daughter. There’s so much of it in Deserter: the royal “we,” the dressing up, the appearances. Oh, and finally, things get sexier as well as more sophisticated. There’s tension, there’s flirting – no sex, but it’s not really needed. Also, I love the more-developed supporting character, like Abigail, the Q to Kris’s Bond. Hence the booby traps – actual falsies that turn into bombs!

On Narration:
I’ve previously mentioned how much I liked Dina Pearlman’s reading of the Mutineer, where she did a great job with internal dialogue versus external dialogue. This becomes more important in Deserter since Nelly and Kris now talk both externally and in Kris’s mind. On a textbook, that’s easy to figure out. In an audiobook, it’s all Dina Pearlman’s skill.

This is a very well written series. It reminds me a bit of David Weber's Honor Harrington series in scope, but it has a life and flavor all its own. I have listened to the first three books and each one is an exciting stand alone thriller with twists and turns that you will not see coming. But, each one is also a smoothly crafted extension of the whole. I enjoyed them all. Kris Longknife will leave you wanting more...

I wasn't sure that Dina Pearlman had the voice range to carry this series, but she has proven to be up to the task. Her only problem is her phrasing. She refuses to follow the written punctuation and adds pauses where none are called for. This bad habit destroys the flow and continuity of action in many, many cases. Other than that, which can be lived with if you grit your teeth, she does very well.

I give the series 4 stars and Pearlman 3 stars. It's a good combination and a fine listen.

I liked the first book, I can't believe this is the sequel. This has some very bad writing. Expect sentences such as "The men left standing were running". ?? Well, which is it, were they standing or running?? Also, all of a sudden Kris seems very desperate for male attention. One second she's teasing her bodyguard Jack by asking him what he thinks of her ass, then 2 pages later you hear that being straddled by her old friend Tom is something she's been "dreaming of for so long". Which by itself is fine, I suppose, but sex-starved heroines was not what I was looking for when I bought this book. I wanted a female heroine that kicks ass and judging from this book, Kris is not it.

I almost felt sorry for the narrator, who is forced to read this and not groan at some of the mainstream cliches and the author's wishful thinking about what women are like and how they react to men. But I didn't pity the narrator too much, because she's exaggeratedly dramatic all the time, regardless of what pitiful, unimportant sentence she's reading. At the same time, she reads all the dialog with a flat bored voice. For example, the text goes "'Oh my god!', the agent gasped" and the narrator reads it like nobody's gasping at all, with a completely flat and unemotional voice. It's difficult to explain how she sounds, sorry. But it's confusing, and it gets tiresome very fast.

Better Than The First Book

Admittedly, it took a good Audible sale to entice me to read this second in the series. The first had failed to impress - it felt rough around the edges and not thought out enough. But I found that I enjoyed this second book and even looked forward to the next in the series. A lot of the issues of the first had failed to materialize in the second and the story was both different and a lot more solid.

Story: Time away from the military means Kris must deal with her family obligation. It's hard being a princess. But when a friend needs help, she races across known space to save him. What she finds, however, is an elaborate trap with her as the intended victim. But someone has greatly underestimated the "damned Longknife."

The story builds from the first book but takes a different direction: no military this time and all Kris' personal life. Nelly the computer is given a huge upgrade that greatly changes her and how she interacts as well. Meanwhile, Kris has begun to recognize the effect her position in society has on others - and just how dangerous it is to be her friend.

New characters join familiar ones from the previous books. I found the new characters to be even more interesting and certainly Kris is developing quite a support system. It will be interesting to see where the story goes from here.

I listened to the audible version and the narrator did an excellent job.

This is book two in the Kris Longknife series. The story flows more smoothly in this second installment. Shepherd appears skilled in writing conversations between intelligent witty people.

Kris sets out to rescue her friend Tom. Kris has some determined enemies who’d like to kill her and tried to get to her via her friend Tom. She is the Prime Minister’s daughter, billionaire in her own right, member of an extremely wealthy and powerful multigenerational family, and a Navy lieutenant 2nd Class, and now a Princess in a new star nation/empire.

The story is interesting and fun read. There was more action in the second half of the story. The suspense keeps one on the edge of their seats. The story is well written and intriguing because the Kris in installment two is a bit different from the one in Mutineer. This is a somewhat typical space opera that is all about characters along with some action, suspense and just a good read. Dina Pearlman narrated the book.

As good if not better than the 1st book

Kris Longknife is a great character in a fun adventure story. If you're a fan of military sci-fi, then you'll get a kick out of this adventure.

Though this book was predictable, it was well written. As with most sequels to a fiction book, lots of bread crumbs were dropped in this one to steer you to the next book in the series. a pleasant read.

not much naval action

a lot of between the action scenes fill in. interesting situation of making moslems as the good guys.

Continues to entertain with subtle innuendo. Plenty of good guys and bad guys and overcoming of multiple obstacles.