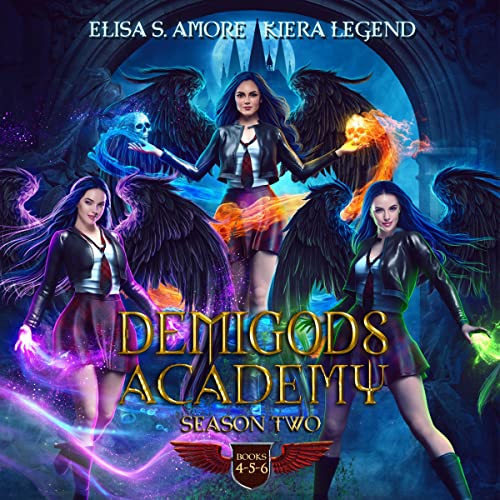 Return to the academy with Melany and her friends in this new season full of magic, mythology, and adventures. This bundle includes books 4-6 in the number one best-selling series Demigods Academy. A young-adult urban fantasy saga for fans of Harry Potter and Percy Jackson.

After the war against Zeus, nothing is the same anymore for Melany and her crew. Despite all their losses and griefs, they must move on and rebuild a new academy where Titans, Gods, and Demigods work together to protect the human world because something strange is going on.

People on Earth aren't dying, even those who have been shot or stabbed. Melany is determined to find out who's messing around with life and death. But first, she has to deal with the new, deadly powers swirling inside her; she's more dangerous than ever.

Can she really control all those powers, or will she succumb to them?

good but not great

this book was lovely, I love Greek mythology but I thought the relationships were incredibly weird, it was quite a struggle to Finnish and there were some moments that were not really age appropriate, but if you like that sought of thing with swearing in, this book is for you,but at the end I personally didn't like it.

I really enjoyed the second season, it did not disappoint me at all !

I tried really to like MC but she came off narcissistic and arrogant. I literally had to push through it. Story line was good I just hate how the MC was written.

I enjoyed this storyline, however, I had a bit of a problem with the voices reading. It's not that they did it a bad job, it was just that it was hard switching voices for a character that had a different voice in their own chapters. idk. It just took away from the character at times. But the stories were good. I wish each book had been a little longer and more in depth. It felt as if the writer was just trying to wrap things up too quickly. it would have been nice to know a bit more of Hera, Apollo and Nixs sides. It wasn't as detailed as the first few books and it took away from the power of the storyline.