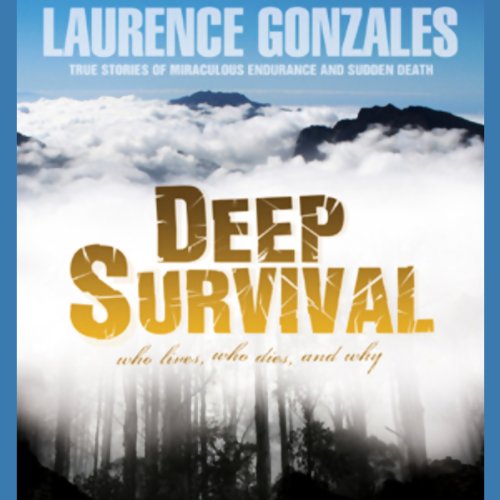 By: Laurence Gonzales
Narrated by: Stefan Rudnicki
Try for £0.00

After her plane crashes, a 17-year-old girl spends 11 days walking through the Peruvian jungle. Against all odds, with no food, shelter, or equipment, she gets out. A better equipped group of adult survivors of the same crash sits down and dies. What makes the difference?

Examining such stories of miraculous endurance and tragic death, Deep Survival takes us from the tops of snowy mountains and the depths of oceans to the workings of the brain that control our behavior. Through close analysis of case studies, Laurence Gonzales describes the essence of a survivor and offers 12 "Rules of Survival".

In the end, he finds, it is what's in your heart, not what's in your pack, that separates the living from the dead. This audiobook will change the way we understand ourselves and the great outdoors.

"The study of survival offers an illuminating portal into the human psyche, and Gonzales, knowledgeable and passionate, is a compelling and trustworthy guide." (Booklist)
"A superb, entertaining addition to a nature buff's library, or for anyone not tucked safely away in a bunker." (Kirkus Reviews)

What listeners say about Deep Survival

Fascinating 1st Half, Cynical 2nd Half.

This book was fascinating to me, but I have to be honest, the conclusion of the book made me regret spending time reading it. I expected this book to be stories of survival and then after recounting the story, the author would explain why that person survived, why they didn't, or what they could do better.

In reality, this book is much more physiological and scientific. Many of the chapters speak about the physiology of the brain and what occurs during stressed situations. How parts of your brain shut down and others engage. If you enjoy science, this will fascinate you. No other survival book has spoke so much about the physiological and psychological effects of survival and more importantly, how to train your brain to be better in survival situations.

I like that the book focuses that survival is more than wilderness survival. It can be survival during financial troubles, business troubles, divorce, and death of others.

One of the essences of the book the author repeats, is that in survival situations you will do things that make no sense, things you would never do if you were at home, you make clearly stupid decisions. When you are in a survival situation you have little control over what happens, your brain owns you and very likely might make decisions which will kill you. After all the brain (as the author explains) is not designed to work in a way of your personal self-interest, but to benefit the future-interest of the species in general and future evolution. There is incredible supporting evidence to this theory as explained throughout the book. The author is also a very strong believer in other (semi-controversial) scientific theories such as "Chaos Theory", "Complexity Theory", and "Normal Accident Theory".

The first two thirds of the book was really interesting, but the last third was only mediocre. I feel like the book was clearly written at two time periods of the authors life. The first 2/3 of the book is very clear and concise. It is like the author has discovered the secret to survival and wants to share it with you, with enthusiasm. It sounds like a young man, optimistic that he has discovered the fountain of youth. The last 1/3 is incredible cynical, you can hear the sadness in the author's voice. It's like the author wrote the first part, then it sat on a shelf for 20 years, and later he decided to finish it. During that lapse in time he discovered that there really is no secret. His pessimism is apparently, and he repeats "Sometimes good survivors die, and bad survivors live, there is a lot of luck involved." The last third of the book is also much less organized and thought-through. It is jumbled together in large chapters that don't have a good sense of separation, leading to my idea that they are essentially ramblings. This is in stark contrast to the beginning which is incredibly focused and organized.

He continues by telling stories at the end of his pilot buddies who died when they did everything "right" and then how idiots have survived even after clearly making stupid decisions. He repeatedly drives home how unrelentingly un-fair life is. The ending of the book was clearly more personal for him. The stories at the end are all people he knew, compared to beginning of the book were stories of strangers he studied about through accident reports and interviews. The book even ends explaining, "We are all going to f*cking die, either in a plane crash or by cancer, you might as well go out living." Although there is some truth to that, I found it incredibly disappointing conclusion. I spent 10 hours listening to this book, and at the end the author makes it sound like it doesn't matter. The end of the book sounded to me, like the endless ramblings of a dying man. It seemed that he implied that he was wrong about what he wrote in the first part. I was really frustrated with that conclusion, after such an amazing composition of stories and data presented at the beginning, we end with a cynical view of hopelessness. The beginning and end of the book are so polar, I can't believe that the publisher published the book in this condition.

The Narrator did a great job though. 5 Stars to the Narrator.

I'm not sure it can get better than this

Gonzales effortlessly weaves quantam mechanics, spirituality, psychology and James Bond into
a fascinating book that is at first glance about physical survival, but it can be used as a metaphor for many facets of human experience.

I'm in awe of how Gonzales uses information from such diverse sources - yet it all fits so logically. I can't say enough good about this book. It's intelligent, educational, emotional, and entertaining. And finally - the perfect narrator as a bonus.

never a dull moment with this audio book, i loved it. as many others have noted, the narrator is very good and never misses a beat. i love all the things others have noted, plus one other thing. this man can write, really write. every sentence in this book is well crafted and exuberant in its choice of words. i will listen to this again and again. thanks to all the other people whose comments made me curious enough to listen to something i might not have ever chosen.

Read all these thoughtful reviews.

As a rule, I do not write reviews if I have nothing more helpful to add to the other opinions. But I can't stay mum on this one. This book is worth every insightful moment. Five stars, could be more. This is simply a "me too" review

I was somewhat torn on how to review this book. When I first read the book, I came away feeling like I had learned alot about how the mind works and what it is that makes some people able to survive these life threatening situations.

After giving the book some time to process, I started to realize there's very little content or real information. A lot of theory (which only modest science behind it) and a lot of antecdotes.

I participated in a 1-hour meet-and-greet with the author to discuss his book and ideas. I was not at all impressed. Very little scientific method behind his ideas. His book makes it sound like his ideas have broad-reaching applications, but it turns out that they apply only to a very specific class of person.

Office workers, intellects, and city-dwellers need not apply. The mindset and skills he talks about only exist in survivalists, militia groups, and rural-country folk. This, more than anything else, was the most disapointing aspect of this book--learning that the author believes his book has no value to someone like me.

An absolutely great book. This was my first book into what is referred to as "survival literature." After reading other books in the same genre, I would highly recommend this to anyone as either a primer on the group, and/or a broad, stand alone reference.
One thing to watch for, and it's not a critique of the book necessarily, but simply an interesting observation.
The author seeks out adventure, always trying to live up to his father's example. Except that his father lived a thousand lives in the service of his country, came home and raised a large family, and carved out an all-American life. The author, in contrast, never served anyone but himself. He went through several marriages, flew for fun not for country, and generally missed the larger point of his father's core example. That of self-sacrifice, not self-aggrandizement.
Still a great book, that I gave 5 stars.

A terrific audio book. 10+ hours, but wish there was more. The true account storytelling dovetailed with the explaination and analysis exposes the roots of survival.
Exciting, frightening, and educational, with lessons applicable not only in survival circumstances but everyday life.

This is a profound look at what a human being goes through in a survival situation. It is not designed to relay the gory details of survivor stories. Instead this book systematically disects and examines the way the human mind functions when it meets with disaster. I have never read a book that better describes and defines the attributes that separate "The Quick From The Dead". Gonzales also did a great job presenting this information in a personal way that keeps the reader on the edge of thier seat. Exellent book for anyone, especially if you ever venture into the wild. This should be required reading for SAR professionals.

More Than Lost in The Woods

I've always been drawn to stories of survival so this book was a natural for me.

Gonzales really brings out how we are all in a state of survival. That is in our personal lives, business/work, economic, emotional, .... So it is really wonderful to hear what it takes to come out the other end alive.

Add good and appropriate narration and I'm telling all my freinds to get this one.

This book is all about survival, life, the universe, and everything (with profound apologies to Douglas Adams). It is a moving meditation on what it is to be human and applies to all of our existence even though we usually ignore our mortality and the functioning of our minds. The adventures and misadventures Laurence Gonzales chronicles reveal our human condition better than anything I have ever read. This is not a simple adventure book so some may be disappointed. It is so much more. I understand Gonzales has another book along similar lines due out in September of 2008. I hope it come to Audible and I hope that Stefan Rudnicki narrates that one as well. He is brilliant. His narration of "On Intelligence" was excellent - his intelligent speech highlighted that book as well as this.