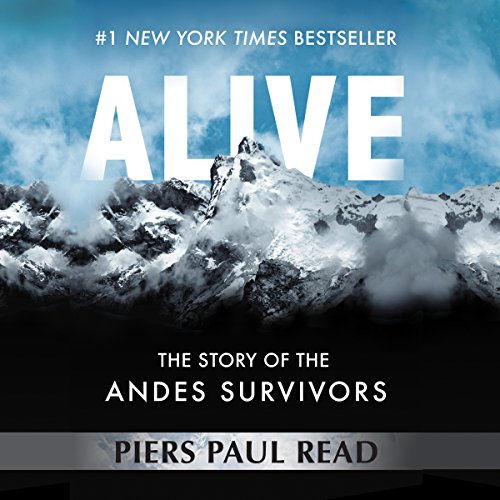 By: Piers Paul Read
Narrated by: Paul Ansdell
Try for £0.00

On October 12, 1972, a plane carrying a team of young rugby players crashed into the remote, snow-peaked Andes. Out of the 45 original passengers and crew, only 16 made it off the mountain alive. For 10 excruciating weeks, they suffered deprivations beyond imagining, confronting nature head-on at its most furious and inhospitable. And to survive, these men and women not only had to keep their faith; they had to make an impossible decision: Should they eat the flesh of their dead friends?

A remarkable story of endurance and determination, Alive is the dramatic best-selling account of one of the most harrowing quests for survival in modern times.

What listeners say about Alive

the message of the book with empathy, understanding and deep (any) insight as to the pain and struggle of those being described

i have no doubt that this title is an important one, so much so that i cannot do it the disservice of listening to this version

i will simply have to look and wait for and until another more sensitively approached version is released.

and i have never stopped listening to a book before, however much i didn’t enjoy the narration, this is an unhappy first and i do so out of respect for the subject and the pain and struggle of those being described.

please ignore the star ratings, they are meaningless for this review

i simply don’t feel able to give any

this review is 100% regarding performance, at this point, i am saying nothing about any other aspect, how can i I wasn’t able to finish

This is a great book! I found myself listening to it at 2am in the morning, unable to switch off. I was born way after the event so I only knew snippets of what had happened, so it was a shame that the preface gives the ending away. Other than that, a really enjoyable read. Well worth the credit.

Enjoyed the story but...

I've already read the book and was interested to listen to the audio version.

Unfortunately I felt the choice of reader was poor - although clear, the reading was far too lighthearted and jovial sounding

Grim retelling of the Adean air crash in the '70s. Interesting to hear the actions of the parents and the useless military.
The question is... Would you?

One of the best books I've ever read

Incredible story, I couldn't stop listening. The narrator was actually very good on the whole, but, as others have pointed out, his pronunciation of Spanish names and places was awful. Still, it doesn't really detract from the experience and he makes up for it with otherwise good narration.

The story here is absolutely crazy.. would recommend for that alone.
A tragic accident in the first place but then pile on top of that everything else they had to endure.

Why tell us how it ends at the beginning?

Very interesting story and clear narration however, it was a shame they told you how it ended at the start of the book. I’m not sure why they did that as you already knew how many survived and how they were rescued which did ruin the anticipation aspect of the story a bit.

Fantastically detailed and well paced book. Even knowing the outcome didn’t ruin the journey on how they got there. Well Worth a read!!

the story here is incredibly powerful. I'm not religious, but it's clear how much faith enabled the survivors from the crash to endure their awful ordeal.

Excellent (including the narration!)

I genuinely cannot understand why some reviewers have had such a negative reaction to the narrator of this audiobook - he seems to me to have got it just right - lively and with some emotion, but at the same time not over-doing the emotion i.e. reading with some feeling and energy but at the same time allowing the reader space for their own subjective reaction to the content. There is nothing worse than an over-interpretive narrator whose emotional reaction and consequent expression clashes with one’s own. And yes, it might be a bit irksome that his Spanish pronunciation isn’t spot on (especially if you have had a few lessons yourself in order to converse with the locals about their culture…) but, again, I really cannot understand why that would be quite as irritating as it apparently was to some…. So, overall, having read (listened to) several books on this Andes plane crash, I would say this one is the most comprehensive in terms of detail and background information. And very well narrated too.

Overall, I highly recommend this book! The only criticism I have is that they should’ve chosen a Spanish-speaking narrator. The narrator is a British man with a nice voice, but it’s just a little strange to hear him mispronounce Spanish words. Since the story is about Spanish-speaking people, it would’ve been nice to have a narrator that could comfortable say the names of the people and places in the book.

I've loved this book for years. For the most part, the reader was fantastic. But I do believe Juan & Jose are pronounced with what's called a soft j, not as in jog... But like I said great other than that

Loved this story, so tragic but so beautiful in its courage, determination and truth. Could I have so brave?

If you are super interested in this story, this is a great book for it. Be prepared to listen to a lot of minute descriptions of cannibalism.

Amazing story! I was caught up the entire time!

I absolutely loved this book. The narrator was phenomenal, and the story was extremely well-written. I never got distracted and wanted to keep listening. It's wild that this is a true story, it sounds like a Hollywood blockbuster! I'm anxious to watch the film. Please read!

this is a great story of survival! These boys and young men were so brave to have endured so much. Humanity is certainly amazing! My only complaint about the narrator is that he pronounced almost all of the Spanish names wrong. For example: a double L is pronounced like a Y, and a J is pronounced like an H. Neither of those were ever correct. Pronunciation of other Spanish words and locations was also usually incorrect as well. It didn't take away from the story, but one would think that a narrator assigned to a story with non-English words would make sure he/she was pronouncing them correctly.

It is a beautifully written tale of a miraculous feat!
This book was recommended to me by someone when I was talking about true crime and the deaths on Mount Everest. I started listening the next day during my commute and I suddenly started looking forward to car rides.

There is great detail on what happened, the men's experiences and struggles both mentally and physically, and they went about surviving.

I would not recommend to those who can't handle slightly morbid topics involving death, wounds, etc.

Long in detail but excellent story of survival in a hostile environment. The will to live is strong enough to survive extreme hardship

I could not stop listening. It was so interesting! The author made a great job of describing clearly all the incidents. The narrator was also great.

This was certainly an interesting story about an actual 1970s plane crash in the Andes. Following an introduction to the reason and background of the flight and its passengers, it becomes a very detailed description of the disaster, the struggle of the survivors of the crash to stay alive, and the efforts of family and officials to find the plane and any survivors.

The book feels like a nearly moment by moment account of events. There's no indication of where all the source material comes from, but there is so much time spent on excruciating, and intimate detail that I started to wonder how much of the story was true, and how much was created or surmised to fill in blanks - or pages.

There are quotes throughout the book of intimate thoughts of the protagonists, some never even spoken aloud. We know they didn't write them down at the time, because their predicament included being stranded without anything to write with, or on.

The story is enthralling, and can stand on its own. It does a good job of describing the tremendous challenges and tribulations faced by the stranded group. But the level of minute details -of individual thoughts and exchanges - just made we start to wonder how much of the story reflected the actual events.