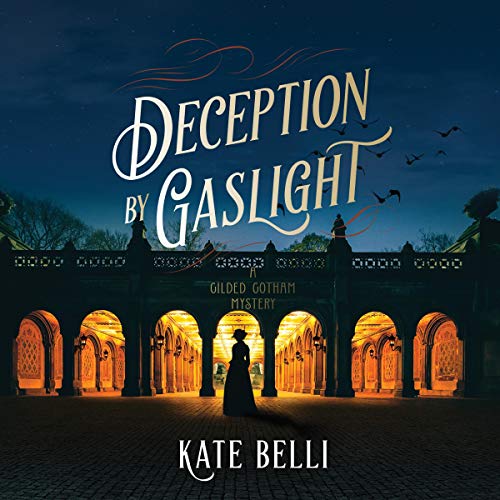 By: Kate Belli
Narrated by: Melanie Carey
Try for £0.00

As a chill sets in on New York City in the winter of 1888, a jewel thief dubbed the Robin Hood of the Lower East Side has been stealing from the city's wealthiest and giving to the poor. Genevieve Stewart - a young woman whose family is part of Mrs. Astor's famed 400 but who has forged a life of her own as a reporter - decides to chase the story, but gets more than she bargained for: a murder victim sprawled in a dark alley in the dangerous Five Points neighborhood.

A handsome neighborhood tough comes to her rescue - but when she encounters the same man at a glamorous ball a few nights later, she realizes he's society scion Daniel McCaffrey. Could this be her Robin Hood? When two more murders rock the Knickerbocker world, it becomes apparent that something much more sinister is afoot than a few stolen diamond necklaces. Genevieve is determined to prove that Daniel is Robin Hood - but she's loath to believe he is a killer as well. From the glittering lights of Fifth Avenue to the sordid back alleys of Five Points, the truth is just one murder away.

What listeners say about Deception by Gaslight

Enjoyable stuff set among the toffs of New York. Ghastly people all of them but there’s something delightful about the rich getting their just desserts. Terrible British accent though!

Deception by Gaslight is an engaging mystery, narrated with a perfect lightness and touch of wryness by Melanie Carey. It is comparable to sitting down to coffee and gossip with a favorite companion- while also discussing parties, food, dresses, and oh yes, murder. Looking forward to listening to the next in the series!

Strong women and men with a sense of honor

Narrator Melanie Carey paints a vivid picture of Belli’s complex, flawed, and ultimately powerful protagonists straddling high society and gang-ruled slums in gilded age New York City. Carey’s performance captures warm, determined, and funny moments right alongside self-serving, ruthless, and violent ones for an audiobook that is engaging and makes you eager for the next in the series.

Kate Belli does an amazing job with the gilded age! her characters of Genevieve and Danny leap off the page. A page turner even as an audiobook. Can't wait to read the sequel!