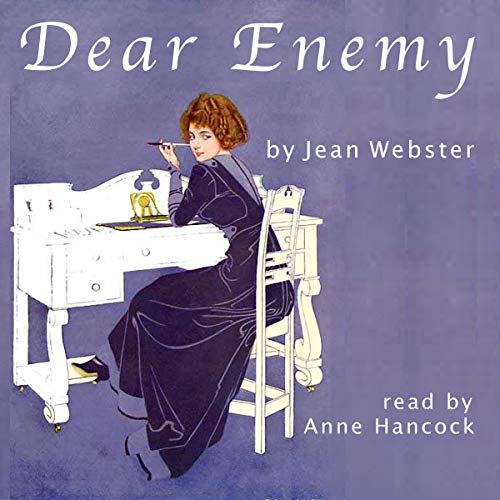 By: Jean Webster
Narrated by: Anne Hancock
Try for £0.00

This delightful sequel to Webster's Daddy Long-Legs centers on socialite Sallie McBride, who reluctantly agrees to become director of an orphan asylum. The asylum's benefactors, her friends Judy and Jervis Pendleton, insist she is just the person to institute the sweeping reforms the institution needs. The exuberant Sallie soon begins ruffling feathers of the staff, filling the children's lives with hope and love, and locking horns with the new Scotch doctor, the Dear Enemy of the title.

What listeners say about Dear Enemy

What could have been a really charming sequel to Daddy Long Legs becomes something quite ugly, due to the frequent comments on how 'defective' children (deaf, epileptic, and mentally disabled) should be treated - ie. forced sterilisation, segregation from normal children, and even arsenic in the food!!! I know this was the period of time when eugenics were widely believed in, but to a 21st century listener, it is really disturbing and left a nasty taste in the mouth. Excellently narrated though.

This is not unabridged and I just noticed because I had read the novel before. When I finished listening to the audiobook I had to go and find on my paperback the parts of the novel that I remembered and were missing in the audiobook, just in case I was going crazy.
I was disappointed. Just don't say it's unabridged if it is not.

an oldie but a goodie

liked the reader. nice use of vocal expression as the book is a series of letters If could be tedious if not read well. As others have mentioned has out dated content re: attitude to hereditary but hey the world has moved on since this book was written and it has to be listened to in that aspect. Enjoyed the characters and story.

Dear Enemy was first published in 1915. It was the final novel that Jean Webster wrote, a year before her untimely death during childbirth. DE is the sequel to the 1912 novel, Daddy-Long-Legs. Similar to DLL, DE was a major bestseller in its day. Both are epistolary novels but, unlike DLL, in which all of its letters are addressed to one man, the titular DLL, in this story, the heroine, Sally McBride, writes to several different people, including Judy Abbott, the heroine of DLL.

Sallie is the BFF of Judy, who is ecstatically married to wealthy philanthropist, Jervis Pendleton, the titular DLL of that novel, and mother of a baby girl. The timeline of Judy’s marriage seems to indicate that this story occurs two-three years after the end of DLL, when Sallie and Judy were both 21. So at the start of this novel, Sallie must be around 23-24 years old.

Jervis has fulfilled a major desire of Judy’s, to purchase the John Grier Home, a grim orphanage where Judy grew up, and which Jervis has been a patron of for many years. Judy has convinced beautiful, ditsy socialite, Sallie, to take over running the JGH for a few months until a suitable, new headmistress can be hired to replace the former callous and incompetent headmistress, Mrs. Lippett. The events of the novel take place over the course of a year, in which Sallie evolves from a frivolous rich woman raised to be nothing but a pretty ornament, into a serious, compassionate, and highly skilled headmistress engaged in extremely important work.

Sallie has two romantic interests in this novel, handsome, charismatic Gordon Hallock, a wealthy, twenty-five-year-old U.S. Congressman, who becomes Sallie's fiancé late in the novel, and the orphanage's doctor, a modestly financially comfortable, 29-year-old, harsh-faced, embittered Scotsman named Robin “Sandy” MacRae. Sandy is the titular, “Dear Enemy,” to whom Sallie jokingly addresses many letters by that salutation throughout the novel, even though Sandy lives just down the road in the small town where the orphanage is located in rural Dutchess County, New York, and she sees him in person on an almost daily basis.

Though the major theme of this novel, child welfare, is much more serious than that of a brilliant, poor, hardworking orphan going to college in DLL, I would describe this novel as a “dramedy,” because the sprightly wit Sallie displays in her letters provides many a chuckle throughout this wonderful novel.

I had previously read this novel several times in the past, and most recently I experienced it as an audiobook. What I find most fascinating about this novel is the fact that it is a time capsule into women’s limited opportunities in 1915, even a white woman from a privileged, wealthy background like Sallie. At that time in history, there was a strong impetus by social reformers toward more humane treatment of children in general, and orphans in specific. Jean Webster supported this movement and had direct experience with it. In 1915, the US was in the early stages of moving beyond inhumane, institutional orphanages toward the foster-parent model that predominates these days.

It is quite difficult to keep an epistolary novel interesting, because it is all “tell” and no “show.” But Jean Webster does about as excellent a job as possible in this genre, due to the fact that Sallie has a very lively, witty voice in her letters.

This book has an important romance subplot, with a definite HEA ending. There is a nominal romantic triangle in that Sallie’s main suitor through most of the book is Gordon. However, it isn’t a true triangle, because we know from the book’s title that somehow Sallie will end up with her “Dear Enemy.” The fun is in the journey to their HEA.

The audiobook version of this book that I listened to is narrated by the accomplished voice talent, Anne Hancock, who is an AudioFile Earphones Award winner. There is no other personality on display in the novel but Sallie’s for the narrator to act out, but there is an occasional insertion of Irish and Scottish dialect in the letters that Sallie writes to Judy and the doctor, and Ms. Hancock does an excellent job with Irish and Scottish accents.

Overall, this G-rated novel has aged well and continues to be an excellent, engaging read.

Below is a bibliography of Jean Webster’s novels:

It has aged badly at moments but I still enjoyed it. Eugenics was something of a topic with this author.

Dear enemy is the sequel to The Wonderful" Daddy Long Legs." In my opinion not as good as
the first book but definitely a winner. The narration was good too. Its the kind of book that
is like comfort food, something to savor when you need to escape.

while it is historically accurate, it's appalling

anytime an orphanage administrator talks about poisoning one of their children with with arsenic you have to raise questions as to whether or not this is an appropriate book to have in a collection!

The characters were interesting. There was a lot of action in the story. The reader did a nice job with the various voices.

This is a product of its time—despite, or because of, the well-meaning social agenda, the characters reflect the ideas around social ills of the time, in a way that may shock the modern reader. But the love story still works, and the desire of the protagonists to improve their world and care for those who need help is still meaningful in a world that is very different, but remains racially and culturally discriminatory.

I loved Daddy Long Legs and appreciated a follow up story with Judy and this time Sally doing the writing. I love taking information from the story and seeing the history from the piece.

Well Jean Webster did it again! I just loved this book. I thought nothing can top Daddy long legs, that this one would be a let down but it’s right up there along side of it. It’s a must read!

A Charming and Historically Poignant Sequel

This sequel to Daddy Long legs stands on its own. The story comes out through a series of letters written by a wealthy young woman who has been coerced into taking charge of an orphanage. Her fresh view of how things should be run cause her to clash with people accustomed to thinking of orphans as life's refuse, but her struggle teaches both them and her that there are no limits to the human heart. Her acidic relationship with the Scots doctor who works with the orphans develops into an alliance that allows their charges to flourish. A delightful read.