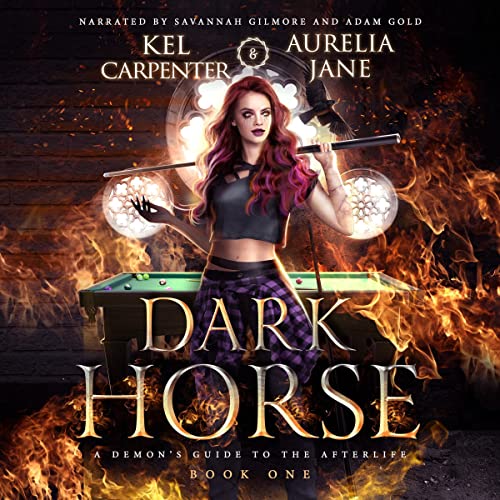 My husband killed me.

Instead of spending my immortal afterlife pissed off and angry, I moved on. I became someone.

Sure, that someone was a demon with the highest track record of reform, a.k.a. punishment, in Hell. But who’s bragging?

I’m right on my way to retirement behind the pearly gates. Everything was going fine...until the Risk Witches saw a terrible vision.

Three men. Each scarred in their own way, born with powers that haven’t been seen in eons.

Upper management sent the best to correct their path. Angels. Poltergeists. Nothing worked.

These men were too stubborn. Too bad. Too untamed....

So they sent me.

Combined, they have enough power to end the world—and they will.

Unless I find a way to stop them first.

Breaking people is my job. But this time...my job might break me.

Author's Note: This is a completed adult paranormal romance series with multiple love interests and some dark elements. If you don't like strong but flawed women and alphahole heroes that need to learn a thing or two about boundaries—this book is not for you. If you love works by Tate James, Ivy Asher, Raven Kennedy, Joely Sue Burkhart, and Kristy Cunning, then dive right in to the afterlife. It'll be one hell of a ride.

What listeners say about Dark Horse

This is another brilliant book from Kel Carpenter. The characters are well written. Fury is a feisty, bad ass, a brilliant character who has died and gone to the after life to become a demon. She drinks to much and has turned sarcasm into an art form. the dialogue between the characters sparkles. Hades is just fantastic side kick.
THe narration is excellent.

Considering I live in the Houston area I laughed so hard at spots! But besides that extra perk I really enjoyed the storyline of what the job of demons are and what the MC has to do! The 3 different Men and their roles and the whole situation kept you guessing what will happen next! Now I want to know what happens in book 2!

Another amazing book, but it's the narrators who brought this story to life ❤
a must read/listen xx

I received a free copy of this audiobook for an honest review.

I don't give 5 star reviews to books I've been given often, but this really deserves it. A solidly enjoyable and absorbing story that kept you guessing, with plenty set up for the rest of the series. Both narrators did an excellent job and suited the characters well.

If you like paranormal romance you'll love this. I can't wait for book 2!

Love Fury and her mission. Full of mystery, intrigue, love, loss and second chances. This is a paranormal RH, with fated mates and a mixture of supernaturals. A book you won't want to put down, an no extreme cliffhanger.

okie I devoured the books as the came out and now the audio! was to die for! the dual narration knocks it out of the park amazing job!!! a must have!

Absolutely flipping loved listening to this book. The narrators are amazing, but particularly Savannah Gilmore. I love the snarky attitude she takes with bringing the main character to life. It is amazing and made the story more addicting. I can't wait to listen to the next book as soon as I can.

This story is not what I was expecting in the best way. Fury our leading lady is a demon who excels at reforming people. She is a caring yet bad ass woman who happens to end up being mates to the 3 delicious men. But this story has so many layers, there is something much bigger brewing beyond what Fury has been told. The romance between Fury and her mates is definitely a slow burn. The story is self contained for the most part, but the ending does give us a small epiloge type chapter that builds into the next book. I can't wait to get my hands on it to discover where this is all going.

This story is full of snark, alpha males, an apocalypse in the making, secrets and hidden plots.
Will Fury be able to stop this apocalypse or will she die trying?

This is one of my favorite book series! The narrators do it justice! I recommend full heartedly!

I enjoyed this book. Changing of voices threw me a bit but none the less I loved everyone’s voice. Story was good and I’m ready for the next book.

I loved this story ❤️, I loved Fury and everything she was doing and was about.

I love how her relationships developed with the main characters in the story.

Her friendship with Roxanne started off in a great way and I loved the progression throughout the story.

Her bond with Roman, Ezra and Dorian was each special in its own way they each in the end wanted the same thing but each had to go about it in their own way and also cooperation with each other when it was needed was phenomenal, i need more right now

Who doesn't enjoy a reverse harem with 3 alphas?

If you are like me and you enjoy getting lost in a paranormal romance with some tall, dark and dangerous, and gorgeous guys then this is your perfect escape. I love that 3 alphas find her as their mate and who doesn't love a heroine who can't be killed and loves to punish. There wasn't a lot of erotica in this book but it is only book 1 of the series. So it was more about getting to know the characters and the issue of 3 supernatural alphas all having the same second-chance mate and her being sent to deal with the three of them as her demon assignment. You have all kinds of supernatural beings in this book and you also have 3 very different hunky alpha males and a very strong heroine. I listened on 1.5x speed.

Can’t wait for the rest of them to come out on audiobook! Too bad it ended on a cliffhanger