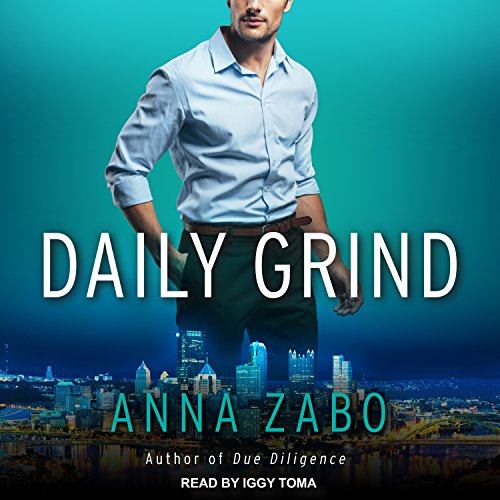 Brian Keppler, owner of Ground N'At, the coffee shop beneath SR Anderson Consulting, doesn't have time for a relationship. His most recent girlfriend broke up with him because he'd become married to his shop, which is falling apart without his favorite barista, Justin. As he struggles to stay afloat, the arrival of handsome British high-tech whiz Robert Ancroft becomes another complication. Rob quickly becomes a fixture at the shop with his sharp wit and easy charm, and Brian soon finds himself looking forward more and more to Rob's visits - to the point where his heart skips a beat when he walks in. But will Brian be able to come to terms with his previously unexplored sexual identity and find happiness now that he has a chance? Contains mature themes.

What listeners say about Daily Grind

What disappointed you about Daily Grind?

So, I have listened to and enjoyed a number of audiobooks narrated by Iggy Toma and was looking forward to listening to this one. Everything was going so well for the first few minutes (he has a great tone to his voice and a dry delivery that works so well for Brian's POV)... and then Rob came into the story. Oh dear.

To say that Toma's attempt at an English (sorry, Briddish) accent was bad is a major understatement. It veered from posh RP Home Counties to "cor blimey, Mary Poppins" cockney to East Coast American to Australian within each utterance. The man is supposed to come from a working-class background from a small mining town near Leeds - so why does he sound like Bertie Wooster trying to imitate Dick van Dyke's Bert the chimney sweep?

What possessed this poor man to suggest that he could "do" an English accent? Did he even bother to read the book first and listen to an actual Yorkshire accent? Or any English accent?

And before you think I am just being petty or a snob... the problem is that he is so uncomfortable attempting the accent that everything the character says sounds awkward, with strange intonation and a slightly creepy Hannibal Lecter breathiness. The characterisation is completely wrong for a down-to-earth northerner with Rob's back story. Honestly, this narration would be a hundred times better if Iggy Toma just gave up on the Briddish and did his own accent for every character.

What other book might you compare Daily Grind to, and why?

If you have read the other (better) books in the series then you will probably find this ok. It is not as good but there are enjoyable cameos from other characters from earlier books. And lots of coffee. They make coffee, drink coffee, sell coffee, agonise over finding decent staff to make the coffee and then drink some more coffee.

In every way. I cringed every time Rob spoke.

Anna Zabo is a very talented writer and this book is surely just a slightly weaker episode in an excellent series. The story is fine - I just found it difficult to care that much about the problems of finding good baristas for a small coffee shop (the only real conflict in the midst of a nice, mundane love story).

Prefer your romances to be different? To take you down roads less travelled? If you do, don't bother with this novel. It's pleasant enough but predictable and lacking in credible drama. Equally, it's hard to care very much about either Bri or Rob when they come off the page as thinly-disguised stock characters. This is a pity as Rob's Britishness could've been a source of difference or tension. A proper point of interest.

I know when a book isn't making a good impression on me. It gets put aside on a regular basis and I don't look forward to continuing the story. Indeed, this one was only completed by virtue of the fast forward button. Disappointing.

An OK story can be rescued by a great narrator. This one was trashed by Iggy Toma's appalling English accent. Granted, the author did little work to place Rob somewhere definite in the UK but it doesn't excuse Toma wandering through first mock-Cockney, then what he imagined to be a nasal upper-class accent in search of the character's voice.

This wound up being my least favorite book of the series. There were many good elements, especially family and friends offering support but the whole kind of fell apart. It dragged. While I understand that Brian was going to reject help until he was at rock bottom, he spent too much of the book being a jerk. He lost my sympathy. I got to where I thought they were right to break up and would have been justified in staying that way. Partly because the foundation was a little too weak.

Love at first sight is all well and good but I felt like something was missing. The guys spent time together and Brian brought good art & family into the mix for Rob. Rob brought company and support for Brian. But there was too much “magically in love” going on. I get that the idea was that ‘love is only a start and one needs to commit and make accommodations for the other person for a relationship to work out’. The insta love was *almost* good enough. But it was not good enough to survive Brian rejecting the support of Rob and literally every other character again and again and again and again and again and again and again and again and again and again and again. It got as tedious as that last sentence. Brian even noticed that everyone told him the same thing and he viciously rejected everyone out of hand and said some really nasty things to employees, friends, customers, and, of course Rob. Honestly, if I hadn’t been listening to the audiobook while fiddling with other things, I might not have finished it. About a third of Brian’s downward spiral could/should have been cut.

Intellectually, while Brian obsesses over work, Rob, who is CEO of a more specialized company didn’t think about work much at all, and never with any complexity. We see Rob at work yet it’s nearly always in the break room, which was odd. It’s the opposite level of engagement of the other 3 books. If all he had was work and photography, he should have had more thoughts about those things. Seeing as how Rob didn’t seem to have any friends, it made him too blank.

Emotionally, Rob tried to offer support to Brian, one business owner to another, and got rebuffed. Rob spent more time pondering being at fault for Brian’s unwarranted nastiness, than he did about his own company. I get that Rob’s offer to help came off as the equivalent of “have you tried yoga?” offered to chronic pain sufferers. But continuing to run a coffee shop that has previously been successful is a solvable problem. And the people offering help actually have some expertise, even if it’s not complete expertise. It was enough expertise to be a good sounding board, which was offered to Brian and rejected. I also think Brian did not grovel enough or change enough to have been forgiven so easily. Brian spent less effort trying to change than Rob spent being hurt. Can you tell I need to vent about my exasperation with Brian?

I thought the narration was well done. The British accent was good enough for me but I’m not an expert nor particularly picky about British accents. It was consistent, for what it’s worth. Interestingly, the narrator only cracked out the accent for dialogue, not for the entire Rob POV segments. I thought this was odd at first but it grew on me and it was rather useful for parsing.

Again, like with the Seattle book, the author spent too much time in tour guide mode. Honestly, I like some local detail. I’ve even been to Pittsburgh, like bridges, and liked spending time there but come on. It was a lot of infodumping. About a third could have been cut.

The sex in this book was frontloaded. There was a lot early on while Brian was figuring out how to be with a guy. And it was pretty hot. Yay. It was not kinky. Given the kink level of the previous books, this reader was expecting something similar. Here, kink only showed up later as mild introductory bits of kink and felt forced to me, rather than organic. I would have preferred less half-baked flirting with kink, as Brian’s new discoveries carried the excitement. Or I would have been ok with Rob, being 40 and settled in his sexuality, to have some established kink that he’s honest about a little earlier. The little kink that did show up felt forced enough to detract from the story as there wasn’t a good enough reason for it to be there.

All in all, there were good elements and some playful scenes but Rob was too blank and Brian got too nasty to really enjoy the whole book. If you’re a fan of the series, proceed with caution. If you’re new to the author, start elsewhere.

very sweet, great story, very enjoyable would definitely recommend this book. Looking forward to other books on the series.

Fine, believable romance. Even made me want to visit and fall in love with Pittsburgh! Already love coffee, now want more of this author and narrator.

Have to admit I'm become a BIG Anna fan!
Another amazingly frustrating, cute, sexy and great book for this amazing series.
Although I did want to murder Brian a couple of times, Rob made more than up for that.
Lovely, just lovely

She always does it...

The author always gets into the heads of her male characters in ways that are astonishing, understanding their depths as an analyst would. The reader is in total synch with her in ways that must please her greatly. The books in this series are always worth re-listening to just for the pleasure of it.

Daily Grind was, in my opinion, sweeter than the previous books in this series. Brian runs a coffee shop on the brink of financial ruin. While trying to keep his shop afloat in comes the delightfully sweet Rob. Their relationship has some ups and downs like any relationship. I loved getting to see the guys from the previous books as well!!
Iggy Toma did a fantastic job narrating this book and series.

I really loved this whole series. The first book was the best. This one was my third favorite.