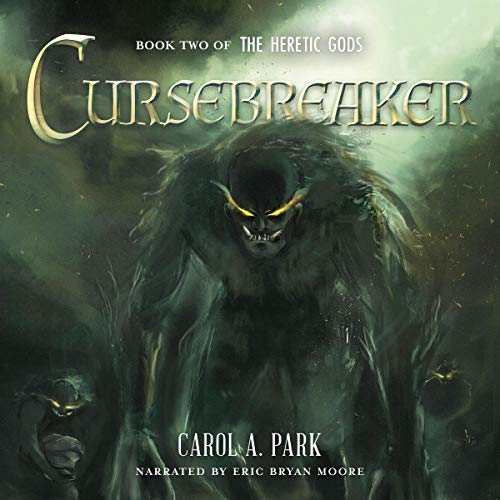 Demonspawn. Gifted. Godtouched. Banebringers are called by many names, but will they ever be called human?

Book Two of The Heretic Gods

After being exposed by Vaughn and the Ichtaca, the Conclave has now cast off all pretense and seized the reins of power in the Setanan Empire - and they just might have a god on their side.

Vaughn is thrust into the center of this conflict. While the Ichtaca seek political allies, he seeks a way to counter the might of a god. But the only lead he has is written in a language no one understands, and time is running out.

Ivana wants nothing more than to be left alone, but her past has a way of finding her. With the Setanan Empire falling apart around her, she'll have to make a decision that will determine more than just her own destiny.

What listeners say about Cursebreaker

Another excellent book in The Heretic Gods series!

I was blown away by Banebringer (the first book in The Heretic Gods series), and Cursebreaker continues to amaze me with its deep characters, entertaining dialog, and intriguing plot. Cursebreaker deviates in style from Banebringer; Banebringer focused almost exclusively on Vaughn and Sweetblade, limiting POV to the two protagonists and their missions. Cursebreaker opens things up to feel more like an epic fantasy novel. The narrative is expanded in scope and incorporates a more extensive cast of characters and a more expansive setting, focusing on the larger political structure and further exploring the pantheon and mythology of the Heretic Gods.

Both books check all my boxes for what a good fantasy novel should have, but Cursebreaker’s characters and dialog are most likely what makes this book (and the series) great. The characters are well developed, deeply flawed, and unbelievably raw with their collection of fears, foibles, and vulnerabilities. There are no heroic, shining paragons of good; the protagonists are human, fallible, and carry plenty of physical and mental scars. The relationships presented in the novel are equally realistic, as characters attempt to balance issues of trust, betrayal, love, and lust. The interactions, particularly the interplay and tension between Vaughn and Ivana, are so strained at times that it’s almost unbearable to read.

Eric Bryan Moore narrates the audiobook version of Cursebringer, and his masterful performance may be one of the reasons I like The Heretic Gods series so much. He creates distinct voices for each character and performs both male and female voices well. Moore is able to portray the characters, particularly the primary protagonists, in a way that brings their personalities, imperfections, and emotions to life.

Special thanks to Eric Bryan Moore who provided me with a copy of this book at my request.

EDGE OF MY SEAT

Alright so this book contains magic and mayham around every "corner" so don't like that than look elsewhere.

but anyway welcome if ur not sure this book is worth the credit or what not then you've not listened to the first book go back I'll be here...