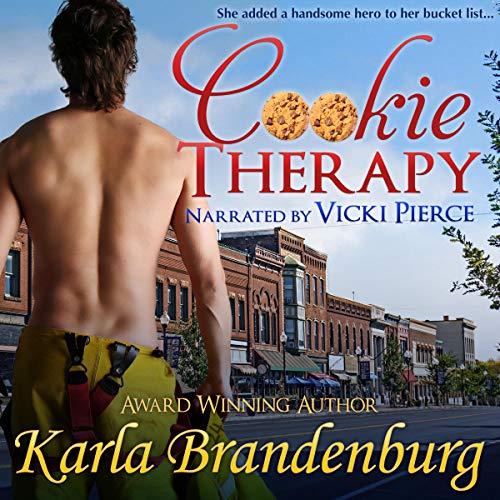 By: Karla Brandenburg
Narrated by: Vicki Pierce
Try for £0.00

To escape notoriety from her role in the school-shooting she barely survived, Elizabeth Lambert moves from Houston to Hoffman Grove, Illinois. Plagued by panic attacks and nightmares, she’s determined to embrace her second chance at life, knowing that death could take her in an instant. A one-night stand with a local, handsome firefighter should remind her that she’s alive, but like a good cookie, one is not enough to satisfy her craving. Will he reject her when he learns about the blood on her hands?

Firefighter and paramedic Matt Billings fights his attraction to the alluring, new bookshop manager. She dangles a one-night stand under his nose, but the last time he gave in to such an offer, he ended up with a child. He is determined to be a better man than his philandering father. Can he convince Elizabeth that her past is not as terrifying as suddenly being a parent, and a relationship is worth more than just a checkbox on her bucket list?

A story about a teacher who survived a school shooting and its after effects, meeting a single dad. He still has issues with the mother and is juggling with his work hours as a fireman. This back drop brings its own issues as love blossoms, enough to overcome everything. I loved the story and the excellent way in which it was narrated. Definitely recommended.

Cookie Therapy is a sweet love story about Matt and Elizabeth and how they got together with the help of their friends and family. Matt is the sexy firefighter/paramedic while Elizabeth is new in town and having a hard time coping with a tragic incident that happened in her life. It is a captivating storyline with likable characters. Vicki Pierce did a great job bringing this story to life.
🎧AudiobookObsessionReviewer

The most amazing thing about this book is how Karla Brandenburg takes a heavy topic like PTSD and without making light of the topic, give plenty of light hearted moments to make this such a lovely read/listen.
The performance by Vicki Pierce was well done, and flowed well with the story.

Cookie Therapy by Karla Bradenburg is a great listen! I loved how the author meshed humor, second chance at love with a real affliction. PTSD is not something to take lightly, and the author wrote this book with great compassion, wit, and endearing characters. The narrator, Vicki Pierce fit this book perfectly. She brought the characters to life. I requested this review copy audiobook and have voluntarily written this review. I will definitely listen to more books by this author and narrator.

Romantic and touching romance! I loved it!! Beautifully written with warm likeable characters! I highly recommend this sensual story to all lovers of romance👌To narrator Vicki Pierce........Good job👌

I can not imagine the grief or guilt of surviving a mass shooting anywhere let alone at a school. Elizabeth is running from her past and her mother. Matt is just trying to live and not become his dad. Together they find a way to heal each other. Lots of up and down feeling in this one

This was my first Karla Brandenburg's book. This is the fourth book in the Northwest Suburbs Series. Elizabeth and Matt story is beautiful and emotional. Elizabeth is a lovely woman, who has a PTSD. She moved from Houston to her aunt's house in Hoffman Grove, Illinois, in hope to have a second chance at life. Matt, a firefighter, father of a young child, is handsome, caring and protective. They share a beautiful chemistry. The secondary characters are great. Elizabeth's aunt is an amazing character. The storyline has it all: emotional, fun, and sexy. I love the friendship and the family spirit in this story (minus Elizabeth's mother). I love the ending. This story is beautifully written, with understanding and compassion. Vicki Pierce did a great job to bring to life this amazing story. #AudiobookObsession

I loved this book! The characters came alive in the beginning, and you knew early on, how they all connected with each other. So, of course you were anxious to hear, how the story would end! What I really enjoyed was how the author inflected humor while writing about a very serious topic and how a person copes with PTSD. Highly recommend this extremely well written story. The Audio was also exceptional!

What a great story of two wounded souls trying to mend their broken lives. A wonderful take on second chances with humor thrown in. It really showcases how family and friends can help if you can find a way to let them in.