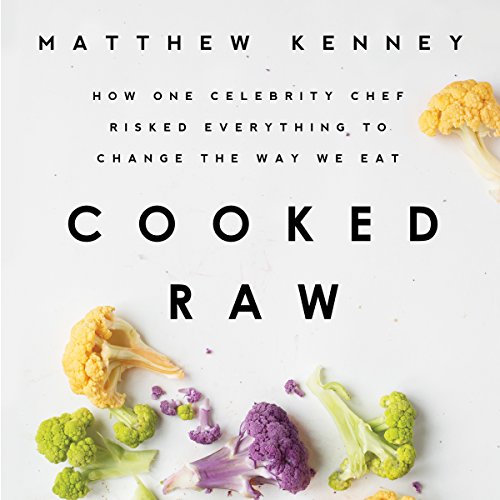 By: Matthew Kenney
Narrated by: Donny Baarns
Try for £0.00

Cooked Raw is the dramatic memoir detailing Matthew Kenney’s remarkable and riveting journey through the culinary world and his provocative exploration of the future of food for the 21st century.

As a youth who embraced healthy living as a teenager, swearing off processed foods to heal a body badly damaged by a poor diet, Kenney was an unlikely chef candidate. Yet, as a chef in late 80s New York, Kenney soon found himself on national television, carrying full pages in fashion magazines, and being flown all over the world to consult and appear. As his career and empire grew, Kenney became more and more disconnected from the work he was doing and searched for a way out. Eventually, his overextended business crumbled and made for years of gossip columns, shattering the life as he knew it.

This ending, while brutally painful, evolved into one of the most exhilarating stories in the food world, as Kenney embraced his passions for a sustainable lifestyle. From turban wearing guru’s pushing powders, cleanses and colonics, to sophisticated housewives searching for health, Kenney shocked the culinary world with his intention to prepare food not only without cooking but also without heat, devoid of animal products and processed foods: a cuisine made of plants and no heat. Raw food for a new world.

Bringing to light that food and health go hand in hand, Kenney used every opportunity to improve his new raw cuisine and its methods. Speaking at TED conferences, moving to Los Angeles and raising awareness globally on how great tasting food can promote health, his brand grew. Nearly 25 years after becoming a disillusioned young chef, Kenney felt at home in his own life for the first time. Not only was he healthy and happy, he had identified the future of food.

What listeners say about Cooked Raw

Where does Cooked Raw rank among all the audiobooks you’ve listened to so far?

This is the first audiobook I've read and it's been a good experience.

What was one of the most memorable moments of Cooked Raw?

Having selected the book because of an interest in raw food it was a little surprising to hear of him going hunting early on in the story. An interesting account of the roller-coaster journey of his career followed in which his openness and honesty was refreshing. I am amazed at his energy and enthusiasm for his work despite so many setbacks. This is an interesting book for any entrepreneur and is inspirational for anyone interested in raw food.

I mostly enjoyed hearing about the benefits of raw food and recipe ideas.

I enjoyed listening to this in small chunks to and from work.

I would certainly listen to more audiobooks and would recommend this title to others.

Story is more about following your dreams and persevering through adversity in business, as it centers around the chef finding his path of being an innovator in the culinary scene. It is an interesting glimpse into the food world, especially the raw food & vegan world. Worth a listen because it offers a different view other than just the benefits of eating raw vegan.

Where does Cooked Raw rank among all the audiobooks you’ve listened to so far?

I love this book
I have been100% raw vegan for 48 years traveling the world as a photographer. I have always admired Matthews Kenney's integration of the raw foods life style with the high end presentation of raw foods prep and the possibilities of presenting raw foods in the ambience of luscious environments.....And this book finally gives me more insight into the ongoing journey of Matthew kenney and his trip from country life as a kid to being a top newYork and international 5 star chefs ( and raw food oriented at that)
Be sure to see his website and the other image based elements available on the internet about and of him.

Matthew is setting an example for where healthy vegan diet can go in all its glory of color and flavor and nourishment...and even luxury,,
Bravo !
Thanks for this book Hoping to have MORE books form Matthew Kenny in the audio format.
I really enjoyed this and plant to get all of my like minded healthy athletic raw foods frends and others to buy this book.

Loved this book. I was already somewhat familiar with some of MK's work and have been intrigued about the story behind the rise and fall of Pure Food and Wine - which was my favorite restaurant ever. If MK had narrated this book himself it would have been an even more mesmerizing experience. The narrator guy tried his best but he didn't become one with the story.

This was such an incredible book! It was fascinating to hear Matthew Kenney's ups and downs. He has started over from the bottom but keeps on going. What a good guy. It was also interesting to hear about his raw food journey. Great book!