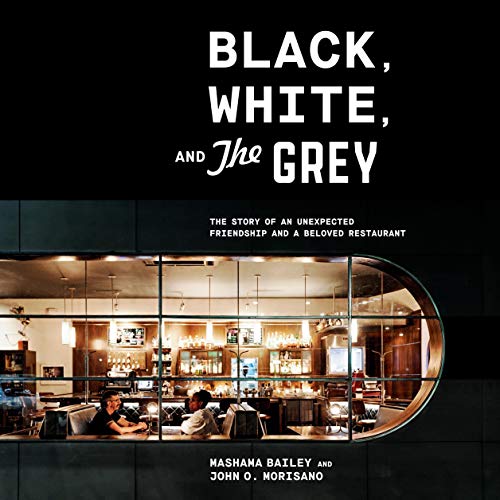 Black, White, and The Grey

A story about the trials and triumphs of a Black chef from Queens, New York, and a White media entrepreneur from Staten Island who built a relationship and a restaurant in the Deep South, hoping to bridge biases and get people talking about race, gender, class, and culture.

Named One of the Best Cookbooks of the Year by Garden & Gun • “Black, White, and The Grey blew me away.” (David Chang)

In this dual memoir, Mashama Bailey and John O. Morisano take turns telling how they went from tentative business partners to dear friends while turning a dilapidated formerly segregated Greyhound bus station into The Grey, now one of the most celebrated restaurants in the country. Recounting the trying process of building their restaurant business, they examine their most painful and joyous times, revealing how they came to understand their differences, recognize their biases, and continuously challenge themselves and each other to be better.

Through it all, Bailey and Morisano display the uncommon vulnerability, humor, and humanity that anchor their relationship, showing how two citizens commit to playing their own small part in advancing equality against a backdrop of racism.

“From the first few paragraphs of Mashama Bailey’s prologue, you know that you’re dealing with a writer of uncommon honesty. She and partner John O. Morisano offer us an illuminating exploration of what it takes to build something and understand one another, and in the process remind us that restaurants are about much more than just food - even though every recipe, from the Dirty Rice to the Clams Oreganata to the Country Pasta, is proof that Bailey is one of our country’s brightest chefs. Black, White, and The Grey blew me away.” (David Chang, author of Eat a Peach)

“ The book arrives at an ideal time to help facilitate the tough, continuing conversations around social justice and equity in the food space.” (Bill Addison, The Los Angeles Times)

“The fact that neither author narrates like a pro is part of the appeal: It feels as if you’re overhearing a real conversation about the ways their partnership has been tested...together they fitfully map out a small-scale blueprint for racial cooperation.” (Jennifer Resse, New York Times)

What listeners say about Black, White, and The Grey

We rise! — only eating at The Grey is better!

Black, White, and the Grey is one of those books that you cannot forget. It is on its surface the story of the creation of a top-notch restaurant in Savannah, Georgia. But it is also a slice of life in 20th Century America depicting the frisson between races. The individuals depicted in the book are both human and humane, as they develop individually and as they grow as a team to create one of the greatest restaurants in the American South.
Having met both John-O and Mashama, and having spoken with them in their restaurant over the course of the past winter season, I can attest to the genuiness of the personalities as depicted in the book. There are elements of both joy and tragedy, as well as suffering and accomplishment in this book. Having been at The Grey during the pandemic, I witnessed how the leadership and staff of The Grey rose above the trials of the pandemic to rise to even great heights of culinary success as a result of their collective hard work.
Bottom line: read the book, listen to their voices (including their profile in the third season of Netflix’s Chef’s Table), and, above all, eat in their very unique restaurant.
All in all, a triumph of the human spirit.

A story of how millionaire experiencing middle age crisis and self absorbed but talented chef opened restaurant. This book is weird and probably was written with idea to be adopted for the movie. Thus weird storytelling: starting with accident, main story and returning to accident.

Both authors seem to be out of touch with reality. My "favorite" part was their problem with kitchen porters and inability to find people who would work at this position more or less on permanent basis.They tried everything: be nice to them, be friendly, not be friendly, don't pay attention, pay attention and so on. Everything except paying more, of course. It's important to notice that the requirements for this job in the Grey were more serious than in other restaurants while salary is same (minimal wage). No phones, no smoking brakes, no talking! Then one day after all of the porters except one quit John had to wash dishes. After that incident they decided to change "culture", be respectful to porters, added some more corpo marketing mambo jumbo and 30% increase in salary from 11 USD per hour to 15 USD and voila suddenly people stopped not coming to their jobs or leaving in the middle of working day, I don't know why it took whole chapter for a great self made businessman John or super people oriented chef Mashama to understand that if you pay same minimum wage as everywhere else but add some weird requirements people might not work in a place with additional weird requirements.

1 star for recipes plus 0.5 star to each of the authors because writing is difficult and it seems a lot of work was put in this book.

View from a Savannah Neighbor and Customer

I, too, live in Historic Downtown Savannah. I don’t frequent The Grey, but it’s at the top of my list for special occasions. It’s arguably the best place in town.

This book is thoughtfully written and brings to light the true challenges of race relations in this country. I live in a beautiful, spacious home within walking distance of fine restaurants, museums and theaters. Blocks away there is another world.

I participated in the Big Brothers/Big Sisters program and I had my heart broken when a family member of my “Little,” was shot and killed, at age 16, over a bicycle.

This memoir makes it real and it is worthwhile for substantive healing and growth in a society with wide chasms.

A true delve into the hardships one faces in developing a restaurant as well as in everyday life. A view into the heart and it’s yearnings and overlapping confusion that plagues us all as humans but doesn’t have to plague us as long as we have the emotional intelligence to recognize what it is. Beautiful book and I am so happy that Mashama came in to help it really become the writing that it needed to be whole. Without her, sorry John o, it would not have been the great work that it is. But it did take the amazing group/family effort to make it beautiful!

I loved the shared narrative of this book. John O’s narrative concise and informative then a curtain pulled back, often, and another perspective of the same narrative given by Mashama. Priceless. I particularly enjoyed the details John O gave about forging a restaurant business with no experience (having never heard of a dish pit?!!) thank you for your honesty and vulnerability. Mashama’s comments about those early days of planning the business were rich (to me). The story of Scotts accident permeated my soul and will remain there. Though I don’t drink bourbon, I grabbed my journal to copy the recipe for the Paper Plane and one of these days I will make it and raise my glass to Scott. I hope to visit The Grey some day. This book will stick with me for a while. I wish I had the community you have built amidst the ruins of America in my life. I guess I need to get to work on that. Thank you!

I’m sad I used a credit on this. I am a restaurant industry geek and love stories about humble beginnings, chefs, etc. this is not that. It’s super underwhelming, boring, and the narration is really corny. I feel like Johno dominated the story and had nothing substantive to say. In general it’s just not captivating. I’m glad they have a successful restaurant and Mashama sounds like a great chef. I want her story more than his.

Different and I loved it!

The authenticity of both Mashama and John O was refreshing. What a great example of what America can be. If I'm ever in Savannah, I will be dining at the Grey.

Practical experiential knowledge of “how to become an Anti-Racist”!!

Loved that this was read by the authors!!! And appreciated that the journey to equality is TRULY A LONG HARD ROAD for US ALL!!!
THANK YOU!!!

We’re reading for a diversity book club. The content provides real life examples of our how real biases are and how they can be overcome with thoughtfulness and giving consideration to others.

A Braided Story of Hope for Our Times

Excellent story well-told in a braided fashion by Bailey and Morisano. With their two voices interwoven in an authentic conversation about their journey, we learn how they met and came together to create The Grey, always much more than just a restaurant. This book is a must-read for our times, a story of hope gained through blood, sweat, tears and tragedy. A story of race, resilience, healing, and forgiveness. A story of what is possible. A story of transforming not just an old Greyhound bus station but transforming ourselves to see beyond bias, to look beyond the past to an equitable future for ALL.