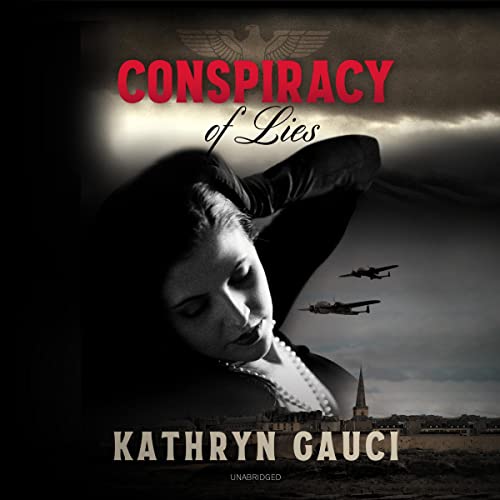 By: Kathryn Gauci
Narrated by: Gabrielle de Cuir
Try for £0.00

1940. With the Germans about to enter Paris, Claire Bouchard flees France for England. Two years later she is recruited by the Special Operations Executive and sent back into occupied France to work alongside the Resistance. Working undercover as a teacher in Brittany, Claire accidentally befriends the wife of the German Commandant of Rennes, and the blossoming friendship is about to become a dangerous mission.

Knowing that thousands of lives depended on her actions, Claire begins a double life as a Gestapo Commandant’s mistress in order to retrieve vital information for the Allied Invasion of France, but ghosts from her past make the deception more painful than she could have imagined.

Part historical, part romance, and part thriller, Conspiracy of Lies takes us on a journey through occupied France, from the picturesque villages of rural Brittany to the glittering dinner parties of the Nazi Elite, in a story of courage, heartbreak, and secrecy.

What listeners say about Conspiracy of Lies

Wow. One of the very best ww2 historical fiction

This great audio book made me cry in sadness, walk away out of fear of what was going to happen and use my imagination to see the beautiful countryside and manors of Breton. It’s a story of intense love. Strong loyalty and friendship in one of the worst times in the history of the world,. Strong character development. The author made you love who you needed to love and despise the pure sheer evil of the nazis. Ww2 historical fiction is my favorite genre so I have much to compare this book too. This audio rises to the top. . Narration was great too