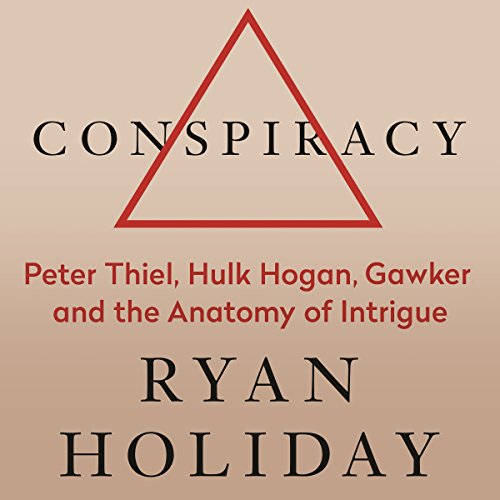 In 2016, one of the giants of modern journalism fell: Gawker Media, infamous for saying what other outlets wouldn't say, was sued for publishing Hulk Hogan's sex tape, lost the case and went bust. After countless other lawsuits it seemed that Gawker had finally run out of luck. But luck had nothing to do with it.

Peter Thiel, PayPal founder and billionaire investor, had masterminded the whole thing. Still furious at an article that had outed him 10 years previously, and increasingly disgusted at Gawker's unscrupulous reporting methods, Thiel had spent nearly a decade meticulously plotting a conspiracy that would lead to the demise of Gawker and its founder, Nick Denton. After a multiyear proxy war through the Florida legal system, the settlement of $140 million in favour of Hogan ended it. The verdict would stun the world, and so would Peter's ultimate unmasking as the man who had set it all in motion. Why had he done this? How had no one discovered it? What would this mean - for free speech? For privacy? For culture?

In Holiday's masterful telling of this nearly unbelievable conspiracy, informed by exclusive interviews with all the key players, this case transcends the narrative of how one billionaire took down a media empire or the current state of the free press. It's a study in power, strategy, and one of the most wildly ambitious - and successful - secret plots in recent memory.

What listeners say about Conspiracy

absolutely excellent book of Holidays, when he sticks to journalism he is unrivalled. I thoroughly enjoyed this book until his political Trump Derangement syndrome views leaked in and ruined it. Unnecessary and unwanted commentary on what was a mostly excellent story.

I’m going to start by saying that this book is a very well researched, thoughtful and nuanced retelling of a fascinating true story.

The problems for me are twofold; Ryan Holiday (the author) narrates this book. As skilled as Holiday is as a writer his speech on this title is monotone, pauses in odd places and sounds robotic, so much so that I would have sent this back unfinished if it weren’t for the fact that the story itself is relevant and engaging.

My second frustration with this listen is that Holiday makes dozens and dozens of references to other situations, politicians, writers and historical events. Among many others the references are as diverse as the writing of Sun Tzu, many former presidents, military strategy of WW2 and so many more. Whilst I do understand the importance of ensuring that a true story is both relevant and placed within a historical context there are so many references here that they become an unwelcome distraction, as a reader it felt that I was being patronised too - that Holiday assumes the reader/listener wouldn’t be able to form connections, inferences and conclusions independently. Much of it was unnecessary padding.

This is a shame, after listening to this I have every admiration for Holiday as a writer. This is not a project that I could have researched and written about, Holiday has my full admiration for his attention to detail. I do think that Holiday should have written with the confidence to write the story, which he does very well without the need to continually qualify his assertions.

These criticisms notwithstanding this is a parable for our times. Undoubtedly it raises many questions about free speech in the internet age, personal privacy and the power of wealthy individuals to manipulate the law and wider society. To some extent this story is still unfolding, it would be useful to revisit the effects of the events in this book a decade from now.

It is worth sticking with this.

If this was Ryan’s debut book of this genre! I cannot wait for the ones that will follow!

No doubt this is a story worth telling but the author has really made a mess of it. “Why use one word when twenty will suffice “seems to be his motto.

This is one of the best examples of why an author should not read his writings. His voice grates and he frankly isn’t commercial book standard.

Dragged out and boring

Unnecessarily dragged out with forced insights into Machiavelli's writings. Got 4h in and just couldn't handle what felt like a failed attempt at an intrigue

really interesting and thought provoking. Thought Ryan's narration was a bit off cadence at times.

I found the story very thought provoking and interesting. Ryan is not only a good author to tell the story, but I think he's one of the best narrators I've listened too.

Author’s voice and arrogance ruin what could be a good story.

The author seems to be distracted from telling the story by his desperation to impress the reader with his intellect. The only explanation for this is his ego, either out of control or fragile with a need to impress.

It’s a shame as this could have been a good book.

The author should have also had the self awareness that his voice is not made for audio books and his droning makes it’s harder to listen. Again probably and ego issue.

Overall quite interesting - but a bit lengthy

Overall quite interesting - but a bit lengthy.

Could be better in that regard, I skipped 1.5 chapters in the middle and didn’t feel I missed anything

The story is fantastic, the characters are great but the writing is waffling. Full of repetition.

Frustrating to listen to.

He pauses in the middle of sentences. Difficult to listen because of this. I enjoyed the story though and the insiggt into Peter Thiel's thinking.

I’m Ryan’s greatest fan but he read his other books sooooo much better than he read this one.

It was like he broke the whole book into two or three word phrases in an annoying rhythm instead of speaking freely in full sentences like in his other books.

The book is good enough to compensate, but his normal cool and relaxed accent is missing.

I hate slamming one of my hero’s but I hope it is taken constructively.

Epic story and brilliant angle. The subject of the book is not either party or the gossip but the use of conspiracy as a weapon. It is totally inspired.

Interesting story that will make you think hard who is right and who is a bad guy.

But me holidays narration is abysmal. Monotonous and badly paced like he is reading it for the first time and sometimes has to stitch in the rest of the sentence. Next time maybe hire a profesional VA.

Much to think about, but much unsaid

The best thing about this book is that it will make you think about a lot of issues. The story at its core is quite fascinating, and I appreciated the historical connections made by the author. I think that Holiday's "Tell 'em what you are going to tell 'em, tell 'em, and tell 'em what you told 'em" style detracted from the story: Michael Lewis would have made it more compelling. The book troubled me in the days after I read it, for the things it did not say. First, the book is a very sad commentary on the US "Justice" System, which seems to be more a complex auction than a tool of justice.
The more troubling aspect is that Holiday seems to have been captured by his subject Thiel. He clearly spent some time with Thiel and did not regain the distance to be objective. Holiday barely seems to note that Thiel wants to avenge his loss of privacy, while leading a company that seeks to violate everyone's privacy. Indeed, the real difference between Gawker and Thiel is that Gawker made their discoveries public, while Thiel sells your secrets to the rich and powerful. The recent scandals about Facebook show Thiel's DNA in that company's approach to user's data as well. Finally, Holiday seems too struck with Thiel's intellectual depth to point out that his fondness for Ayn Rand does not comport with that view.

A balanced tale of patience, perseverance and pride

Holiday strikes the perfect tone of inquiry and investigation as he details Peter Thiel’s ten year takedown of Nick Denton and the Gawker empire. His story examines both sides of each man’s hubris and arrogance. With personal access to Thiel and Denton, Holiday steps us through a decade of bad behavior that results in a remarkable lack appreciation for the nature of consequences.

An easy listen and a compelling story for our times.

Book examined the inner workings on the entire Gawker trial. Because Holiday worked with all the parties, it gave an in-depth look into the whole case from start to finish. Great book.

The story by itself is incredibly compelling but Ryan Holiday masterfully weaves the strategy and philosophy behind conspiracies into the story.

The story was interesting. The book could have been half the size. A lot of filler.

Great book detailing the underground war that took down the outrageous yet feared celebrity blog site Gawker. Ryan Holiday masterfully weaves together an intriguing tale with modern and ancient parallels!