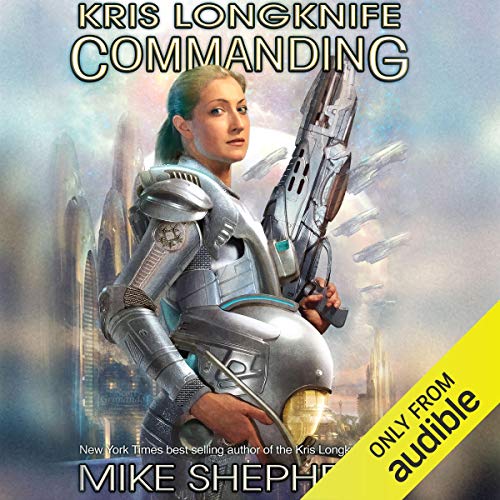 Grand Admiral, Her Royal Highness Kris Longknife is up to her ears in problems....again.

While summoned to the Imperial Iteeche Court to be humanity’s Emissary, it turns out that what the Iteeche really want is a fighting admiral!

You see, they’ve got this huge civil war going, and the Imperial side isn’t doing so well. Kris now has command of the entire Imperial Combined Fleet. Sort of.

The Iteeche Empire has a 10,000-year-long history. There is nothing that won’t say, “We’ve always done it that way,” pointing to a track record lasting for thousands of years. Even when Kris reminds them they’re losing, many have a hard time changing.

Many Iteeche also wonder if letting a human win this war for them isn’t losing everything already.

Kris managed to win a defensive battle with a scratch force. Now she’s thrown together a larger force and is ready to take the fight to the rebels.

What listeners say about Commanding

The book is well written and fast paced. As with all the other books in the series, my favorite character is the computer AI “Nellie” and her children. I found the ‘Nano’ battle conducted by Lt. Megan Longknife and Nellie’s child, Lillie, fascinating. I have enjoyed this series. It is a fun space opera series. Looking forward to the next episode.

The book is just over ten hours. Dina Pearlman does a good job narrating the series. It is great they have kept the same narrator through-out the series.

Sounds like it was recorded in a echo chamber or a barrel. So bad I couldn't listen.

Used to be interesting

It’s getting boring. The amount of time waisted spelling out all of these trivial problems was putting me to sleep. Get back to exploring, or more battles, or something other then how to fix the roads or pump out water that’s filling up transport areas.

Good story that suffers from a wooden performance

This is a pretty good story; but I found Dina Pearlman's performance to be flat and wooden which sucked some of the joy out of this book, Perhaps it was that my last book was narrated by the amazing R.C, Bray, but Dina made all the characters sound the same and I often found myself wondering which character was 'speaking' I don't think she "gets" sci-fi since she leeched the emotion and excitement out of some nicely written combat to the point I was thinking that conquering the rebel fleet must not have been so hard since Dina made it sound like a visit to Costco. Or maybe she did not connect to this book. I went back to listen to another book I have that she narrates and that one was ok. This one is awful and it's too bad because the story deserves better.

Another Longknife legend in the making

You have to wonder how much longer Mike can continue with Kris. She is or has more medals and titles than anyone in the Universe, so where do go from here? Enter cousin Megan. She demonstrates that Miss Meg is truly "one of Those Longknifes" the combination of Kris commanding and Megan marshalling the troops paves the path for more adventures, all the while a new Longknife is making her mark on the world created in the Longknife legacy.

was really disappointed about this book. was supposed to be a kris longknife novel but was more of a Megan longknife novel. I. am wondering why he did not just make a Megan novel. and if you read the Victoria peterwall novels they seem to be kris novel. overall not really sure if he can keep the stories straight any longer.