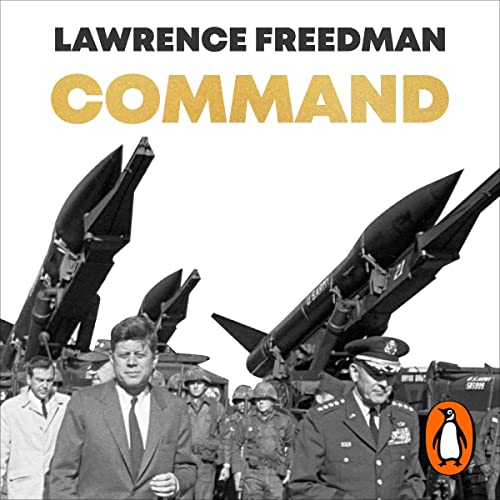 By: Sir Lawrence Freedman
Narrated by: Richard Burnip
Try for £0.00

Throughout history, the concept of command—as both a way to achieve objectives and as an assertion of authority—has been essential to military action and leadership. But, as Sir Lawrence Freedman shows, it is also deeply political.

Military command has been reconstructed and revolutionized since the Second World War by nuclear warfare, small-scale guerrilla land operations and cyber interference. Freedman takes a global perspective, systematically investigating its practice and politics since 1945 through a wide range of conflicts from the French Colonial Wars, the Cuban Missile Crisis and the Bangladesh Liberation War to North Vietnam's Easter Offensive of 1972, the Falklands War, the Iraq War and Russia's wars in Chechnya and Ukraine. By highlighting the political nature of strategy, Freedman shows that military decision-making cannot be separated from civilian priorities and that commanders must now have the sensibility to navigate politics as well as warfare.

What listeners say about Command

This is really hard to listen to as the content is great but the narrator READS. EVERY. SENTENCE. AS. IF. THEY. ARE. PASSING. THE. WORDS. OF. GOD.
COMMAND. THEREFORE. IS NOT. A. SIMPLE. MATTER. and so on.
As a result it is really hard to keep focussed on the content and distracted too much by the narrator.
I know narration is hard, but in this case, the narrator gives too much weight to the words and in doing so makes it easier to read than hear.

Another triumphant piece of work from Sir Lawrence Freedman.

Brilliant case studies complete with clear summaries, all vocalised by a fantastic narration.

Seriously recommend your investment of time listening to this this audiobook - simply brilliant!

Flawed Command or not?

Sir Frederick Freedman hits the nail on the head with this book on politics of Military Ops since 1950.
Dealing with the common problems of democracies involved in conflicts, where coalitions are required to be held together and the opposite side of the coin of Dictatorship or Autocratic regimes being totally controlled by a single person, this is a fine well composed example how, like Hussain, Hitler and Putin fail to engender proper command and control over military operations.

Ukraine is very much in the news, but there have been many prior cases where military command and control issues have resulted in the final outcomes of conflicts, whether it be withdrawal, coups, or total defeat, the common feature is the manner in which the head of the military (politicians included) dictate actions and orders without free consultation with free minded or more professional credentials, and this is why military disasters arise.

Read/Listen and you will be thoroughly enlightened to the aspects of Military Operations in relation to Political constraints, and will further understand why operations or conflicts often fall short of their respective objectives.

An excellent set of case studies, some well known others not. Full of useful lessons for military and political leaders. And an excellent synthesis at the end. There is no better book on this important topic