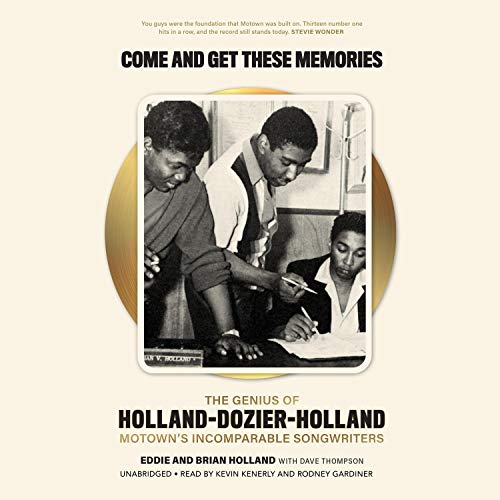 Come and Get These Memories

Brian Holland, Edward Holland, and Lamont Dozier, known as Holland-Dozier-Holland or H-D-H, were the greatest songwriting team in American pop music history. Seventy of the songs they wrote reached the Billboard Top 40, with 15 of these reaching number one on the Billboard Hot 100 pop chart. No other songwriting team or individual has come close to equaling - let alone surpassing - this record.

They’ve been inducted into both the Rock and Roll Hall of Fame and the Songwriters Hall of Fame. As tunesmiths for the legendary Motown Record Corporation, and for their own corporations, Invictus Records and Hot Wax Records, they wrote and produced hits for Diana Ross and the Supremes, including “Baby Love”, “Stop! In the Name of Love”, “Where Did Our Love Go”, “You Keep Me Hangin’ On”, “You Can’t Hurry Love”, “I Hear a Symphony”, “Come See About Me”, “Back in My Arms Again”, and “Reflections”.

Now the legendary composers are ready to reveal the inspirations and stories behind their chart-topping hits, providing millions of fans with the first complete history of their songwriting process, and detail the real-life experiences that led them to write each of their most famous tunes. They will also reveal their creative and intimate relationships with Motown’s biggest stars.

What listeners say about Come and Get These Memories

Another Huge Chunk of Motown History.

So very disappointed when I finished this book, it is a brilliant read with so much musical, soulful and spiritual depth. It really does give you an amazing insight to so many legends, I really have enjoyed the story about three true stunning songwriters and two of surely the most talented brothers in the music world ever!

Gave me time to remeniss smile and sing.

Memories were triggered with this book, my parents were in that mix dancing and singing too. Thanks 😊

HDH are genius songwriters and hero’s of mine. I loved hearing about the history of Motown and the genesis of individual songs.
But you know what they say, ‘never meet your hero’s’ and in this case they are right. Eddie H in particular seems to be absent any self awareness and loads the blame for the situations that ultimately limited his nonetheless incredible success, to anywhere but with him. It’s sad to hear of a series of futile ego driven lawsuits against so-called friends. Sadder still to hear the denial of culpability, and that’s before you get to the casual dismissal of the pain he seems to have inflicted on the women in his life. His mea culpas are shallow and his choices hard to understand.
However, nothing can take away from the ge jus that was HDH at Motown. I’m forever thankful for their talents and these songs.

Brilliant story. The memories of the songs they wrote and for who are a joy to behold. If you love mowtown you’ll love this book. And the narration was fab .

what a wonderful book

I thought this would be another formulaic biography, but I was mistaken.
I was from the partnership and narrated with meaning.
Thoroughly enjoyed it.

Come get these memories

This story is about one of the best song writing trio in the history of music to come out of motown.I thought the narrators were really great.I wish they could've added a few songs.I enjoy listening to stories about the history of Motown.

Loved listening to the backstory of Huntsville and this song writing team, of songs and artists I grew up with. Excellent walk down memory lane.

I loved listening to these stories. It felt as if I was sitting at a kitchen table and someone was talking to me. Lovely stories and fabulous narration. A real pleasure to listen.

It was great that the background of the many hits was shared along with someone of the workings of Motown.