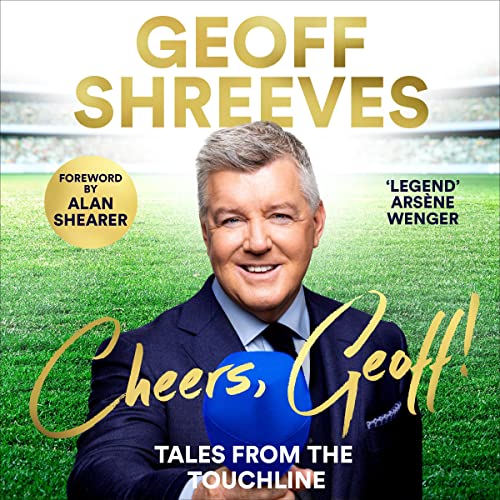 Geoff Shreeves has been Sky Sports’ pitchside reporter on the biggest games of football for decades. Cheers Geoff! is his funny, moving and hugely entertaining story.

There are just a handful of people that have been ever present for the thirty years of the Premier League, but only one person has been at the very epicentre for the entire period: Geoff Shreeves. From signalling the very first ball to be kicked on Sky’s Premier League coverage to facing down Sir Alex Ferguson’s wrath (on countless occasions), Geoff is an integral part of the football fabric, respected by everybody in the game while still asking the toughest questions. Geoff’s interviews with the likes of Cristiano Ronaldo, Arsene Wenger, Frank Lampard and Alan Shearer have become the stuff of legend, but it is his close personal relationships with the game’s star names that really sets him apart.

Packed full of hilarious stories on and off the pitch—including trying to teach Sir Michael Caine how to act, a frightening encounter with Mike Tyson, as well as getting a lift home from the World Cup with Mick Jagger—Cheers Geoff is a must-listen for any fan of the beautiful game. A natural storyteller, Geoff brings an astonishing catalogue of tales to life with his unique brand of experience, insight and humour.

"No one handles the big moments better." (Jordan Henderson)

What listeners say about Cheers, Geoff!

A great listen while away on holiday. Funny and very smart. Fantastic stories for any football fan. Great to find out about the origins of the PL and Sky Sports. Great to see Geoff still doing what he does and loves best every week on Sky.

Such a good book and well worth a listen if you like everything football. A lot of hidden gems

Well worth the read. I will watch Geoff Shreeves with different eyes now. Cheers Geoff.

A steady enjoyable, it’s no earth mover or full of secrets. But it’s a good read for a footy fan, comes across as a good bloke, and stories are interesting,