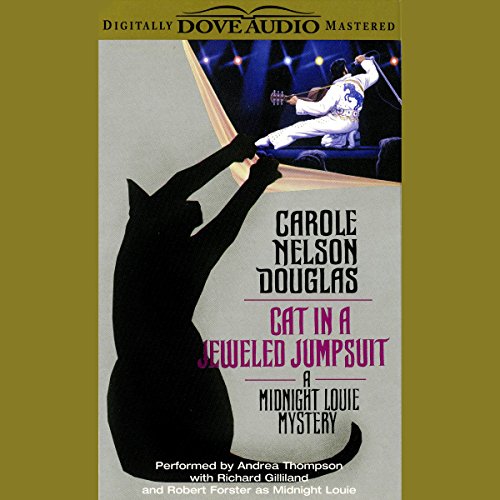 Cat in a Jeweled Jumpsuit

Midnight Louie, the hugely popular jet-black feline sleuth who thinks he’s Sam Spade with hairballs, returns for an 11th outing in this cozy-noir series. This time his human partner, Temple Barr, learn that the remodeling of the Crystal Phoenix Hotel is being held up by a ghost: the workmen swear its Elvis. The opening of Las Vegas’ first Elvis-themed attraction might explain this unscheduled appearance. With death threats, a late night caller and a dead Elvis, the question is not only whodunit and why; but also, was the King himself really dead again, or for the first time…or not at all?

What listeners say about Cat in a Jeweled Jumpsuit

Wish I’d known this was the abridged version

Wish I’d known this was the abridged versioning this audiobook. Unfortunately I made the mistake of purchasing the first three audiobooks available through Audible. I did however enjoy this installment and hope someday that the rest of the series be released in unabridged format on Audible. The author has an incredible imagination, and the narrators gave wonderful performances.

Sam Spade Eat Your Heart Out

Even if you don't like Elvis Presley's music, even if you hate his movies, even if you are so young that the Elvis you know is named Costello, you will like the audiobook.

Comedy that works requires the actors to play their parts without once winking at the audience. We are lucky to listen to narrators who respect their audience enough not to over play either the humor, or the shadowy parts of this story. We get it.

Robert Forster, with his experienced, smoky, voice is Midnight Louie, the black cat who like his progenitor Sam Spade has to save his human "little doll" from pitfalls her human senses miss.

Richard Gilliland is close to perfect as the mysterious voice who calls the Midnight radio talk show in order to have someone to chat with. Many of the radio listeners believe they know this voice. He does the best middle Tennessee accent I've ever heard and I hear all variations of them daily.

Andrea Thompson is a lovely Temple Barr, intelligent, feminine, and absolutely unstoppable. Public Relations experts have do a lot to protect their clients. In Las Vegas she has to deal with public relations nightmares, in this case a possible ghost that will not attract guest to her client's hotel. She is the perfect voice for Midnight Louie's little doll.

This is one of those audiobooks that breaks all the rules. It is abridged and it interrupts the narrative with music and it is still TERRIFIC. The abridgment is seamless, and the story is consistently tight. The music adds to the atmosphere and actually becomes a character in the story. Of course the music is important, even though it is not an Elvis level melody, because although if this is not exactly about the King of Rock and Roll, it is about the people who will not let him go, even those who were born after he actually left.