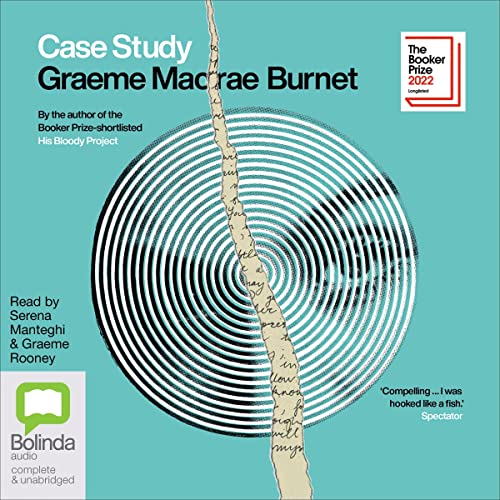 London, 1965. An unworldly young woman believes that a charismatic psychotherapist, Collins Braithwaite, has driven her sister to suicide. Intent on confirming her suspicions, she assumes a false identity and presents herself to him as a client, recording her experiences in a series of notebooks. But she soon finds herself drawn into a world in which she can no longer be certain of anything. Even her own character.

In Case Study, Graeme Macrae Burnet presents these notebooks interspersed with his own biographical research into Collins Braithwaite. The result is a dazzling – and often wickedly humorous – meditation on the nature of sanity, identity and truth itself, by one of the most inventive novelists writing today.

"A novel of mind-bending brilliance... Burnet is a master...and Case Study shows him at the height of his powers." (Hannah Kent)

"Encourages us to look more closely at the inherent instability of fiction itself…genuinely affecting…a very funny book." (The Guardian)

"Brilliant, bamboozling… Burnet captures his characters’ voices so brilliantly that what might have been just an intellectual game feels burstingly alive and engaging." (The Telegraph)

What listeners say about Case Study

This is so incredibly boring. I dont understand the point of this book at all. What a colossal waste of time and money.

Beautiful read! Revolution of the Pscyche

The main character struggles with his existential life. He rises but cannot stay at the height of his notoriety. I recommend this book those who are interested in the ‘70s context within psychiatry and the counter culture happenings at the time.
Very very good.