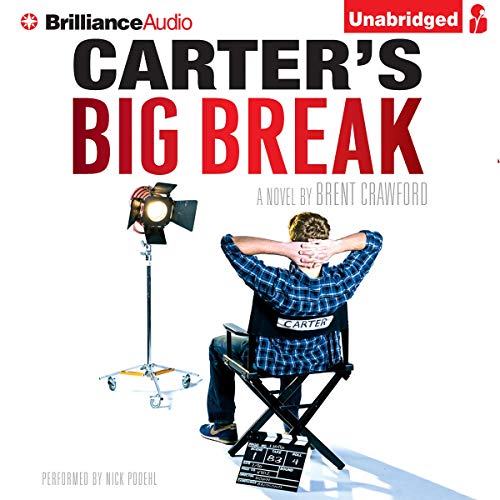 By: Brent Crawford
Narrated by: Nick Podehl
Try for £0.00

School is finally over, and Will Carter has (barely) survived his freshman year. Unfortunately, he quickly learns that the summer break he’s been craving just might break him. When he and his girlfriend, Abby, part ways, Carter can’t help but think his summer is ruined. Things start to look up after he’s unexpectedly cast in an independent film opposite the world’s biggest tween sensation, Hilary Idaho. With Hollywood knocking on his door, Carter gets a taste of the good life. Suddenly, his small town, friends, and family don’t seem as great as they used to. As tends to happen when Carter is around, things spiral out of control, and he begins to fear that he’s not the “somebody” he thinks he is but more the “nobody” he’s pretty sure he always has been. But maybe, with the help of a few friends, he’ll start to see things in a whole new light.

Yet another expertly narrated audio book by the talented Nick Podehl, adding just the right amount of flair; bringing young Will Carter’s voice to life.
School may be out for the summer, but that in no way lessons Carter’s adolescent struggles. Life is hard for teens these days, especially when they’re forced to face some very grown-up situations and Carter is no exception. Again a large factor to play into his troubles is sex. As with most guys his age, the big question is who’s getting some and who’s out of luck and as far as his girlfriend Abby is concerned, Carter fits just nicely into the latter category. And his prospects don’t seem to be looking up when Abby dumps him (again) and starts hanging out with a college guy. The plan of a laidback chill summer with the guys at the pool continues to diminish to more of a dream than a plausible reality when Carter’s dad announces his plan for the two of them to spend the summer “bonding” tearing down and rebuilding the deck off the back of the house. All seems lost for a summer of fun until Carter is unexpectedly saved from sweating the hot months away on manual labor and male bonding with dad, when a movie crew rolls into town and Carter’s new found love for the theater and natural ability prove useful when he is cast in the lead role. Carter soon finds being thrust into the “movie star” life doesn’t solve any of his current problems, if fact it just aides in adding a whole new slew of issues, some that he may not be ready to handle just yet.
Although just a funny as CARTER FINALLY GETS IT, in this second installment, CARTER’S BIG BREAK author Brent Crawford also ADDRESSES some very serious issues facing the youth of today. Hot topic issues such as teen sex, actually have consequences for some of the characters; as dose underage drinking and drug use. I know many parents will be pleased that Crawford not only noted the reality of these acts taking place in the lives of our young people today, but he also chose to

this was a really great book. Love the author

This book was a really good sequel. The plot was very good and it had a very good ending. Brent Crawford is a genius for writing this series I extremely love this whole series. Can't wait for the next one