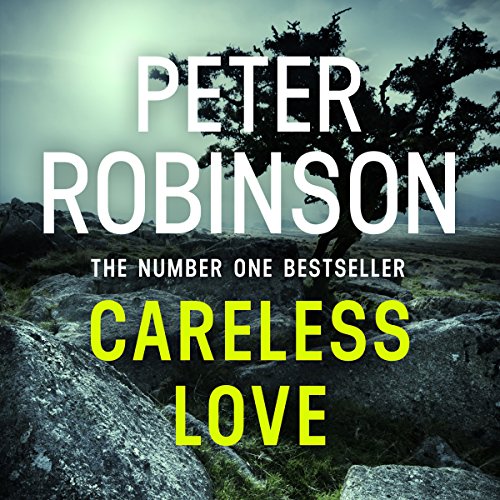 By: Peter Robinson
Narrated by: Simon Slater
Try for £0.00

The thrilling 25th instalment in Peter Robinson's number one best-selling Banks series, in which Banks and his team find themselves with two suspicious deaths.

A young local student has apparently committed suicide. Her body is found in an abandoned car on a lonely country road. She didn't own a car. Didn't even drive. How did she get there? Where did she die? Who moved her, and why?

Meanwhile a man in his 60s is found dead in a gully up on the wild moorland. He is wearing an expensive suit and carrying no identification. Post-mortem findings indicate he died from injuries sustained during the fall. But what was he doing up there? And why are there no signs of a car in the vicinity?

As the inconsistencies multiply and the mysteries proliferate, Annie's father's new partner, Zelda, comes up with a shocking piece of information that alerts Banks and Annie to the return of an old enemy in a new guise. This is someone who will stop at nothing, not even murder, to get what he wants - and suddenly the stakes are raised and the hunt is on.

What listeners say about Careless Love

I have many of the Inspector Banks audible books and thoroughly enjoyed them. This one is far from his best. I thought I was listening to a music catalogue. He comments on the music in the pub, in the car, a suspect looks like a young Joan Baez, now it’s Russian poetry. If you are trying to turn Banks into Morse. Don’t. The story was weak, dragged out and at times boring. In the next one let him run of with Zelda and buy a music store. Retire. This book is going back.
So disappointing.

Good but a fair amount of waffle

Good Banks book,marred by a lot of unnecessary waffle. If I had read the book expect I would of jumped the waffle which added nothing to story but good direction /setting if read as tv script.Story itself well done, listened while walking at the gym ,

My favourite so far.

I've read all of the DCI Banks stories and I think this is my favourite so far. Well crafted, good attention to detail and characters that I feel I know. A definite recommendation from me.

not the best one I've heard

A little hard going in a few places where the story wondered off a bit for me.
Narrator was good in his story telling.

I don't know if DCI Banks books are now targeted towards male readers but having listened through several descriptions of female characters breasts, finally gave up when one female character was described as jealous of another female character as according to the author all women are jealous of other younger more beautiful women! Am a bit sad because have been reading Banks books since my 20s,end of an era unfortunately

I enjoyed this book; it has all the classic ingredients I have come to expect. The story unfolds steadily, luckily with some summing up here and there. I like following Banks through his life and girlfriends and that he is coming to the realisation that beautiful young women he is attracted to are now often as young as his own daughter but am glad he still has a twinkle in his eye. Will he get back with Annie in his old age and would she want him? I like it that nothing in the story is black and white and Banks reflects on human folly at the end. I could see the book ending without knowing what happened to Zelda but she came in at the last moment, so I hope Robinson is writing the next book!

Another excellent story, Peter Robinson never disappoints. The reintroduction of an old adversary is perhaps the prelude to the next novel?

yet another fantastically great listen. leaves one waiting in keen expectation for the next book. Can't recommend highly enough.

One of Robinson’s best to date. Am guessing there is to a sequel as it left us guessing about one the plot lines.

I always enjoy the stories and the narration is good. Like other people I found the references to classical music and poetry a bit heavy and felt it use is just to fill out the story. By now we all know Banks likes his music and poetry but give it a rest otherwise people will get bored and not bother to read any more

I have read all the DCI Banks books and loved every one of them but this one disappointed me. I figured out the plot very early on in the book so it was all a bit “ho hum” and there is far too much reference to his music. I got sick of hearing about what he was listening to and what he was drinking. Just not up to his usual standards in my opinion. Will it stop me listening to his books. ? No way but hope the next one is more gripping.