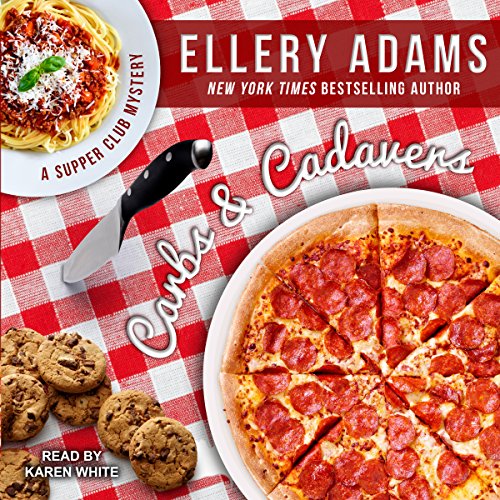 By: Ellery Adams
Narrated by: Karen White
Try for £0.00

James Henry, a kind-hearted professor of English literature, is forced to move back home to Quincy's Gap, a tiny town in Virginia's Shenandoah Valley, to care for his aging father. Shortly after moving into a house that hasn't changed since his childhood, the overweight, divorced, book-loving cheese puff addict accepts a position as head librarian and joins a supper club for dieters who call themselves the "Flab Five".

Avoiding carbs is almost impossible in this deep-fried, all-you-can-eat Southern town, so the mysterious death of a young and healthy athlete provides the perfect distraction. While trying to cut carbs and avoid temptations, James and his fellow supper club members work together to shed pounds and track down a killer.

What listeners say about Carbs and Cadavers

So many unlikely characters calling themselves by unpleasant terms and constantly insulting themselves - reads like this was written by a skinny woman with no larger friends, or at least none she respects and listens to.

Another great series by Ellery Adams.

So glad that the Supper Club series is now being made available in audio. This is a great series and those of us who can no longer read printed books (or even have trouble with EBooks) are fortunate to now have it available.

This is a very real group of people. They are people with their own personal issues who help each other stick to a difficult goal. They are not always successful, but they don't point fingers and shame someone for slipping from their goal. They instead encourage them to keep going. Their struggle is something that many of us can relate to.

The mystery was entertaining and I didn't suspect the murderer until just before the &quot;reveal&quot;. Overall it is a great book and I can't wait for others in the series to become available in audio.

A curious premise for a mystery

In Carbs and Cadavers by Ellery Adams, when James Henry's mother passes away, the loss forces him to leave his job as an English professor at the College of William & Mary in Williamsburg, VA in order to take over the care of his hostile, curmudgeonly father. While settling into Quincy's Gap in the Shenandoah Valley, James meets Lindy, a high school art teacher wanting permission p to put up flyers at the library, where James has gotten the positron as the new director. These flyers advertise Lindy's new supper club, a support group for people who want to help each lose weight. Desperately needing to lose at least 50 pounds, James signs up and finds some new friends in the process.

Besides James, the group consists of Lindy, the high school art teacher; Lucy, a civilian working for the police with the goal of becoming a sworn officer; Bennett, a mail carrier with a love of random statistics; and Jillian, owner of The Yuppie Puppy dog grooming shop. Together, the quintet dubs themselves The Flab Five. They decide upon a low carb diet instead of trying to keep track of calories. And they make plans to have supper together on a weekly basis to hold each other accountable. As the group meets for their first dinner, the members notice all of Quincy Gap's vehicles that contain sirens go tearing down the street, creating alarm on the part of Lucy, who rushes off to see if she can help with whatever the problem is. The other group members admit to their own curiosity and also seek out the cause of the sirens. They discover the dead body of Brinkley Myers, a highly obnoxious former sports jock who doesn't seem to realize that the world and life have passed him by and that he's stuck mowing lawns. Through their personal contacts, the Flab Five gain special insight into the case, which soon develops into one of blackmail and further violence, making the friends uniquely prepared to assist in the case when things go wrong.

This book uses a creative premise for a book, that of a weight loss club. It contains some very realistic characters, who come to life throughout the course of the book. Unfortunately, this book does not portray each character who comes on the scene as vividly as Adams usually does in her books. But the original release of this book was five years ago, in 2013, and a lot of progress in writing skills can happen in five years. This is not to say that the book was bad. Ellery Adams is such a good writer that ever her worst books are better than those of most in the business. I did like the interesting conclusion and the way it celebrates their victories but also opens up new fields for them to explore in the future.

Many cozy mysteries include recipes either at the end of the book or scattered throughout the midst of the book. Carbs and Cadavers contains recipes to complement the book. Almost all books with recipes seem to feature pastries and other desserts, so I appreciate the way this book gives recipes for low carb dishes and even desserts. It is a refreshing change to the unhealthy food that we often see. But if recipes will be given in an audiobook, I think they should come at the end to give listeners a choice whether to listen to the recipe. We also come upon the recipes without any advanced notice, so we often miss the details of the recipes.

Karen White reprises her role as narrator of Adams' Books by the Bay series in narrating this audiobook. She does a good job of making the book interesting to listen to, drawing me to it. She keeps the book moving and enjoyable.

When I first learned that Ellery Adams had written a series called the Supper Club, I was very disappointed not to be able to get them on audio. But happily, Adams is rereleasing the series on Kindle and Audible, and she will release a new addition to the series in March. Though I have pointed out ways in which the book does not live up to Adams's usual high standards, it still was a very good book, one that kept me listening all the way through. I give this book four stars.

This book had swearing, guitar a lot

What a weird book

This book obsesses about food and weight, and the main characters are constantly berating themselves. It was so difficult to listen to such criticism of oneself, especially as it related to weight, and food, and succumbing to being okay with a low value of oneself. The weight issues in this book we're overbearing, and the storyline didn't come in until halfway through the book... When the actual murder happened. I've listened to another audible by the same author, and it was brilliant. however, this book was definitely lacking.

Usually love Ellery Adams, but not this time. This is just one giant whine fest. Characters are blah and impossible to connect with. With all the constant whining going on, it nearly impossible to keep up with the mystery ploy, what little there is. This book is a total downer. Give it a skip

Is this high brow? No, just it’s a really enjoyable way to spend your commute.

This is a fluffy, fun and full of carbs. Chaucer it’s not, but it’s a lovely and perfectly pleasant way to spend several hours.

I loved and related to every bit of this story and these characters. I already downloaded the next in the series. The plot was intriguing and had me guessing until the end.

The story was slow to get started, but did pick up by the end of the very long 1st chapter. Once it got going, the mystery was engaging. The biggest issue this book has is the writer's characterization of overweight people as out-of-control eaters. Those who struggle with their weight may binge on junk food sometimes, but I've never met anyone who struggles to control themself every time there's a cookie in the room. It was a bit off-putting.

That was a very good book.

I enjoyed the story and the characters. There was suspense, humor and sadness. I look forward to the next book in this series. The narration was really very well done.

listen to 3 times and enjoyed it everytime