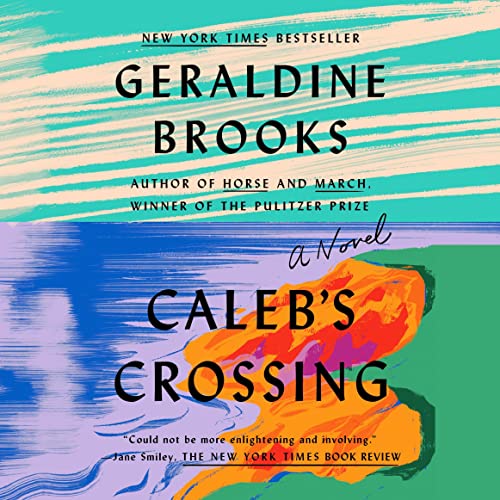 By: Geraldine Brooks
Narrated by: Jennifer Ehle
Try for £0.00

A richly imagined new novel from the author of the New York Times best seller People of the Book. Once again, Geraldine Brooks takes a remarkable shard of history and brings it to vivid life.

In 1665, a young man from Martha's Vineyard became the first Native American to graduate from Harvard College. Upon this slender factual scaffold, Brooks has created a luminous tale of love and faith, magic and adventure. The narrator of Caleb's Crossing is Bethia Mayfield, growing up in the tiny settlement of Great Harbor amid a small band of pioneers and Puritans. Restless and curious, she yearns after an education that is closed to her by her sex. As often as she can, she slips away to explore the island's glistening beaches and observe its native Wampanoag inhabitants. At 12, she encounters Caleb, the young son of a chieftain, and the two forge a tentative secret friendship that draws each into the alien world of the other. Bethia's minister father tries to convert the Wampanoag, awakening the wrath of the tribe's shaman, against whose magic he must test his own beliefs. One of his projects becomes the education of Caleb, and a year later, Caleb is in Cambridge, studying Latin and Greek among the colonial elite. There, Bethia finds herself reluctantly indentured as a housekeeper and can closely observe Caleb's crossing of cultures.

Like Brooks' beloved narrator Anna in Year of Wonders, Bethia proves an emotionally irresistible guide to the wilds of Martha's Vineyard and the intimate spaces of the human heart. Evocative and utterly absorbing, Caleb's Crossing further establishes Brooks's place as one of our most acclaimed novelists.

“Caleb’s Crossing could not be more enlightening and involving. Beautifully written from beginning to end, it reconfirms Geraldine Brooks’ reputation as one of our most supple and involving novelists.” (Jane Smiley, The New York Times Book Review)

“Brooks filters the early colonial era through the eyes of a minister’s daughter growing up on the island known today as Martha’s Vineyard…[Bethia’s] voice - rendered by Brooks with exacting attention to the language and rhythm of the 17th century - is captivatingly true to her time.” (The New Yorker)

“A dazzling act of the imagination. . .Brooks takes the few known facts about the real Caleb, and builds them into a beautifully realized and thoroughly readable tale…this is intimate historical fiction, observing even the most acute sufferings and smallest heroic gestures in the context of major events.” (Matthew Gilbert, The Boston Globe)

What listeners say about Caleb's Crossing

Sadly, I can't go on listening.

I had to stop about two and a half hours in. It was shaping up to be an interesting book, but the reader is so unpleasant that it became unbearable.

I understand that this reader is trying to convey the plain non-nonsense hard bitten atmosphere of these characters, but she goes to such lengths as to make her voice grating and nagging throughout the narrative. I kept trying to turn it down to escape the effect. She seems to try to pronounce each syllable separately, making the characters appear to be almost simple-minded, even though we know that they are not.

This reader is trying way too hard. She should let the written words carry the story.

Ms Brooks clearly did considerable research for this historical novel and that is essentially the only positive point I can make about this book apart from it sheds light on the oppression of native people and on the suppression of women during this period in American history. The book starts and in the early stages indicates a potential for a great story, but it never happens. What we get is the autobiography of Bethia, who is the main character and not Caleb, a personal story that even she admits skips around; and she never delves into her characters. We get a glimpse of what kind of person Caleb is; Bethia's husband is a shadow; her brother and father we get to know somewhat better. The novel sounds like a good history lesson filled with sad stories. Not that I love Hollywood endings, but apart from the vivid depiction of life on the island and in Cambridge, there is little to praise here. The narrator is at her best when speaking as Bethia and at her worst trying to speak as male characters. Her worst is the Yorkshire man in Cambridge.
Don't waste your money on this one.

I had a hard time getting through this one. It's a fascinating story, but Jennifer Ehle really grated on my nerves. Elizabeth Bennett in Pride & Prejudice with Colin Firth--you'd think she would be a wonderful reader, right? The problem is that she is trying so hard to have perfect enunciation that it comes off as stiff and hits the ear wrong. She emphasizes odd words, reads very slowly (which often interferes with portraying the right emotion), and pronounces every "a" as a long "a" (like in "hay") and every "the" like "thee." Since these are two of the most common words in the English language, it's like a gong ringing in the middle of every sentence.

Caleb's Crossing is meant to be listened to!

Historical fiction has never been my favorite genre, but Caleb's Crossing and Geraldine Brooks have shown me that it certainly could be. I thought I was going to be reading the story of Caleb Cheeshahteaumauk, the first Native American to graduate from Harvard. While Caleb was a central character in the novel, Bethia the narrator, takes center stage. Brooks tells Caleb's story through Bethia, and we cringe in shame at the taming of the "salvages", "helping" and controlling them in the name of religion. Bethia tells her own powerful story, and we shake our heads at the treatment of women, who are also "helped" and controlled in the name of religion.


The language, oh, the language! It is what earned the last star to make this a 5 star book. This story is perfect in audio format, and Jennifer Ehle narrates it perfectly. The language helped create authentic atmosphere for me, along with curiosity about where these words have gone. Why don't we use posset, bever, misliked, and harlotize? It's not only 17th century language that Brooks explores; there is also fascinating information about the Wampanoag language, told as Bethia learns it.


I will be reading more of Brooks' books, and I have high hopes that Geraldine Brooks will make me a fan of historical fiction!

This was a fascinating and engaging novel. I loved it. However, the narrator's pronunciation was so stilted and unnatural that it was very distracting to the story. It was as if she felt that because the main character was from the 1700's she needed to use these awkward pronunciations -- overemphasizing her t's and pronouncing the lettter A instead of a. For example, I laid A book on the table. Not sure what was in the narrator's mind, but it came across as overdone and self-indulgent.

Another good entry into fiction!

I find these historical analyses (through fiction) of our complicated history fascinating and helpful even 400 years later. An honest story, of course with an improbable "21st-century" heroine but I'll accept that as long as the details of her conceivable 17th-century life and sensibilities can somewhat match her 21st-century intuition.

This novel offers us an authentic voice about a little know bit of Americana. The mid to late 1600's and 1700 is a new and interesting bit of time in our history; the early years of Harvard, and Cambridge, Mass., the effect of religious zealots on the early Americas, the early efforts by at least a few of the English immigrants to live with the native Americans is something we have heard too little about.

Brook's voice and use of language is a rich addition to this really beautiful novel with the germ of a real event as the catalyst.

This isn't a review of the book, because I couldn't listen to it. I stopped about 15 minutes in. This is the second Geraldine Brooks book that I have stopped listening to because of poor narration. The other was People of the Book. I've heard so many spectacular Audible narrators that it's a big disappointment when the reading is of such poor quality.

It is difficult to listen to this nice story because the enunciation by the narrator is like that of a first grader just learning to read.I will never purchase another audiobook narrated by this person. What were you thinking?

Decide in advance that you will picture the reader in the time period of the book and that someone might actually speak with severe enunciation. Then - - enjoy the FABULOUS book - you won't be able to put it down. I am looking for other books by this author right now, I can hardly wait!