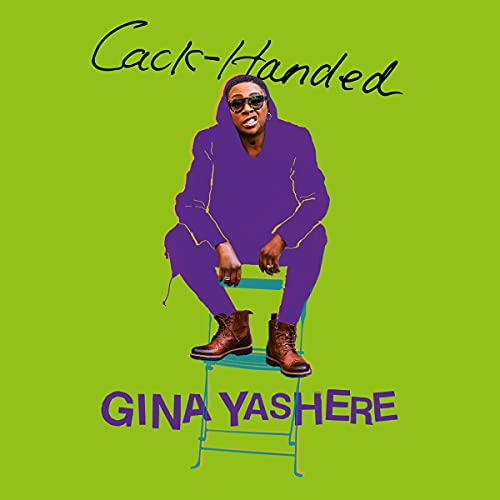 The British comedian of Nigerian heritage and co-executive producer and writer of the CBS hit series Bob Hearts Abishola chronicles her odyssey to get to America and break into Hollywood in this lively and humorous memoir.

According to family superstition, Gina Yashere was born to fulfil the dreams of her grandmother Patience. The powerful first wife of a wealthy businessman, Patience was poisoned by her jealous sister-wives and marked with a spot on her neck. From birth, Gina carried a similar birthmark - a sign that she was her grandmother’s chosen heir and would fulfil Patience’s dreams. Gina would learn to speak perfect English, live unfettered by men or children, work a man’s job and travel the world with a free spirit.

Is she the reincarnation of her grandmother? Maybe. Gina isn’t ruling anything out. In Cack-Handed, she recalls her intergenerational journey to success foretold by her grandmother and fulfilled thousands of miles from home. This hilarious memoir tells the story of how from growing up as a child of Nigerian immigrants in working-class London, running from skinheads and her overprotective mom, Gina went on to become the first female engineer with the UK branch of Otis, the largest elevator company in the world, where she went through a baptism of fire from her racist and sexist co-workers. Not believing her life was difficult enough, she later left engineering to become a stand-up comic, appearing on numerous television shows and becoming one of the top comedians in the UK, before giving it all up to move to the US, a dream she’d had since she was six years old, watching American kids on television, riding cool bicycles and solving crimes.

A collection of eccentric, addictive and uproarious stories that combine family, race, gender, class and country, Cack-Handed reveals how Gina’s unconventional upbringing became the foundation of her successful career as an international comedian.

What listeners say about Cack-Handed

GINA YASHERE has walked me to school every day for a week. I shall miss her 😢. I CAN NOT reccomend letting her accompany you on your travels or whilst waiting in the queue to get petrol (🤣) as she recites her debut book 'Cack-Handed' in typical Gina style enough.

'Cack-Handed' is honestly one of the best books I've listened to/read for a long time. Not only was it hilariously funny and incredibly engaging hearing Gina recount her life story, but it gives a serious insight into what it was like growing up a 1st generation Black Nigerian woman, with Tomboy tendencies in 1970s and 80s Britain.

'Cack-Handed' is like a History lesson and Comedy Show entwined. As we get swept up into Gina's struggle to find her identity in a world where being Black and African in the UK ensured she was resented by both white racists and, sadly seen as uncool and uncouth to her Caribbean counterparts, we also see her rejected by Nigerians in her own homeland. Digging deep into the roots of colonialism and breaking down the African-Caribbean racism within our own community, Gina does so with the perfect mixture of poignancy and humour.

As a child of a Caribbean parent and growing up in the 80s and being a Tomboy myself, Gina's experiences were so relatable: the racism, the hair dramas, the struggle to fit in and the success of acquiring the skill of being able to adapt and speak to everybody and anybody at any given time.

As her story drew to a close, I was left with nothing but admiration for Gina. Despite her challenges and obstacles, despite her mother's overbearing daughter/doctor dreams and being one of very few female Black comediennes in her field, Gina managed to carve a successful path for herself in the world of comedy. Against all odds, Gina is testament that with incredible hard work and burning passion, you, too, can make your dreams come true.

I've had the pleasure of meeting Gina before. I was 18 and at college. I'd written a short comedy sketch/play and cast her as the mother. Writing this play was the ONLY thing keeping me in college. She was one of two famous comedians invited to star in this college project. She showed up to EVERY rehearsal ON TIME and was a joy to be around. She showed us the same respect and reverence she would show an American Comedy Booker. And this, this is why I love Gina so much.

A real one! And a MUST LISTEN!

WARNING: You WILL laugh out loud in public!

I couldn’t stop listening- great story of one triumphant (in the end) life.

A middle-aged, terminally ill, middle-class, white woman is hardly the target audience for such a story. However, I thoroughly enjoyed the ride, and feel that everyone who has Gina Yashere in their life is in for a stimulating, exciting, hilarious, and sometimes uncomfortable time.

Only part way through…..

….. it’s brilliant. Gina’s wit shines through whilst listening to the crazy relatable tales of her childhood. Trying to savour it and not binge listen as I don’t want it to end!
Thank you Gina

I loved this book. It was inspiring, hilarious and real. What a woman Gina is, a real fighter in the best sense, busting stereotypes and never giving up on her dreams.

Enjoyed getting to know Gina

Love Gina’s humour and knew nothing about her personal life. This memoire is an interesting insight into so many aspects of not just her life but the socio cultural and political context, the shocking racism she suffered, the comedy circuit and showbiz, the awful sexism. It was great to hear this read by her. Wishing her all the best success in the US.

I wasn’t particularly familiar with Gina Yashere, but I like to listen to audiobooks of comedian’s memoirs so I thought I’d give this a shot. This genre is usually a mixed bag, with the ‘meh’ ones far outnumbering the excellent ones. But this one was great - she’s funny, she’s had an interesting life, and she’s got a really compelling personality that shines through. I would’ve loved a little more depth to some aspects - Phil Wang, Trevor Noah and Robert Webb’s books all offered touching intimacy and thoughtful analysis as well as great storytelling and comedy - but considering many of the experiences she’s had to live through, I’m not surprised she doesn’t want to do ‘book as therapy’ style writing. She doesn’t shy away from some of the hard aspects of her past however, and her incredible talent as a performer means that I’d recommend this book to everyone.

Prepare to laugh out loud in public

I first saw Gina in the Lenny Henry show and I went to see her live in Manchester around 2008. I’ve been a fan ever since. I enjoyed this book so much that I listened to it in two days! Gina, please write another one as I’m dying to hear about the next chapter of your story in the USA!!

A really honest and essential read from a much loved comedian, would recommend to everyone!

I thoroughly enjoyed this. Relatable, funny, interesting and I hope Gina is working on a part 2 asap. We need more laughter 🙋🏾‍♂️

I have to say I ABSOLUTELY LOVED it! And I appreciate hearing Gina reading it too.
💜💜💜 She is inspirational 💜💜💜

I've followed Gina's career for years. It was a pleasure to here more of her story. Also I'd definitely be up for the sequel.